Our last photoshoot didn't turn out too well. I bought another, and this time decided to focus on the kids only. But the package was for ONE kid and the studio didn't allow buying 2 packages for 2 kids.

I was agonising over who to send. SE coz she won't be a baby for long and she's never had a photoshoot. But the studio had a play area which JE would appreciate. Also the package comes with a mug thus swinging the choice towards JE (SE can't drink from a mug yet!) Finally, it's for kids under 3yo and JE turns 3 very soon.

In the end, decided on JE. The 1-hr-long session went well. JE liked the warm-up play area as expected. The photo assistant was energetic and really helped bring the smiles out. There were costumes available.  I liked a few which JE refused... how do you make a almost-3yo do what you want? Well... you can't, haha. I managed to pick 2 costumes. The 3rd one she picked came with a tight hat which she refused to put on.  Oh well. I only get to choose 4 photos anyway. Sneaked a couple of shots of the session... 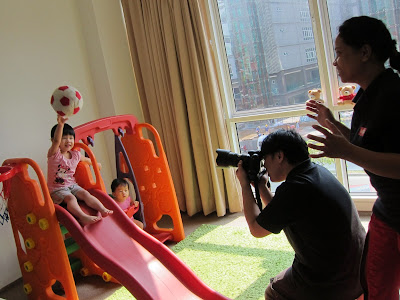 The last section was for family. Finally SE got in on the action! But the little one just stared at the photographer, unsmiling. I guess it's hard to entice a baby to smile. She doesn't play, she doesn't even understand. I was glad that I'd decided to focus on JE. 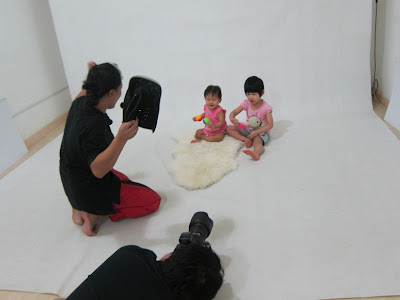 3 weeks to wait before our appointment to view the pics. I have a good feeling about this, can't wait. :)

Was up at Genting last weekend. It was the usual eat-a-lot, play-a-lot trip. :) Play part for the toddler, that is. Hubby realised his annual theme park pass had expired. And, shock horror, they weren't issuing such passes any more! Apparently there is a plan to close the park for a year for reno - obviously they can't sell passes and then close. So hubby took SE back to the room while I took JE to the park.

We finally made it to the Dinosaur section. This has loads of steep steps which wouldn't be possible with a baby stroller. Kinda nice for me actually since it's been donkey's years since I'd been here. 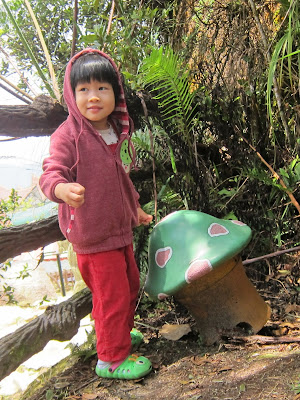 A mushroom! Got smurf inside?


Started JE on the rudiments of posing. I asked her to tilt her head... 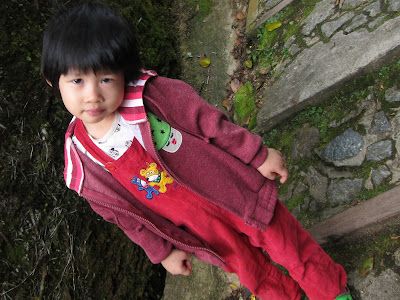 We waited for a group of Indian kids to finish with this dino. When it was JE's turn, she made the peace sign and said just now the people did this. Hehe maybe it won't be long before 'peace' appears at every photo! 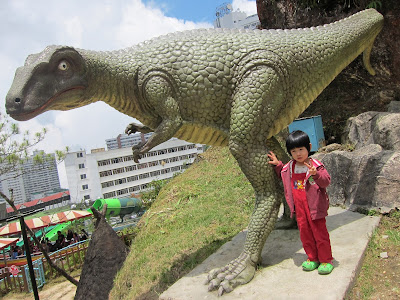 My fav photo of the trip. Both girls fast asleep, with SE's leg plonked on jie-jie's leg. Peace on earth. :) 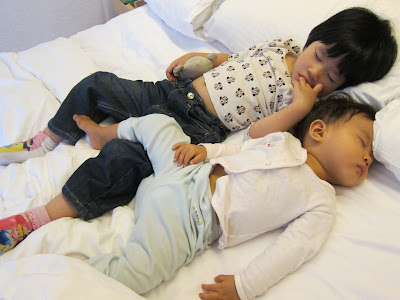 
JE loves copying things we do. This is her sweeping the floor with a big grin. Note how everything is oversized for her! I do believe kids should help on household chores. But at almost-3 years old, she is definitely more trouble than help. 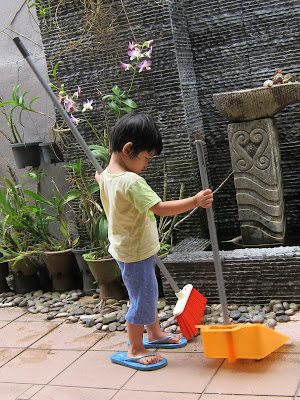 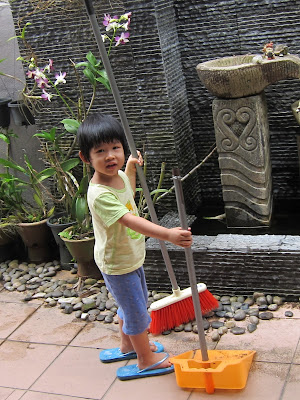 I sweep for you, ok Mummy?

JE: Today jie-jie (referring to my niece Elyssa) say I not princess
Me: Thinking how to answer...
JE: I princess LAH!

Hehe.  Yes, Jo Ern.  You're definitely a princess of my heart! 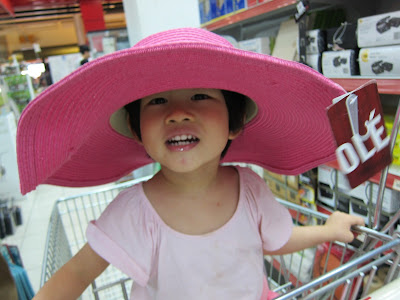 I can't deny I had to fight a lump in my throat when hubby said he was having dinner on his birthday with friends. Who in their right mind would choose dinner and drinks with adult company over dinner with family? Which includes two kiddos under 3yo who would cry, scream, bang things on the table, climb up and down the chairs, ask to go pee-pee etc? Hehee.

We did go for a pre-birthday lunch after he came back from his holiday in Singapore (with friends again, sigh). And the kiddos were NOT model diners, as usual. 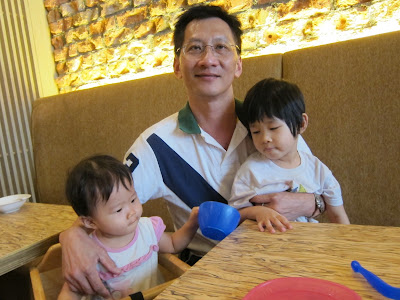 JE: Wanna walk on this chair next. With my shoes on.
SE: BANG BANG BANG!

I now see supermarket trolleys in a new light.  As a kiddo carrier!  JE loves to sit in them and I must say, I do like pushing her in one. She will be near my height and facing me so it's great for chatting. 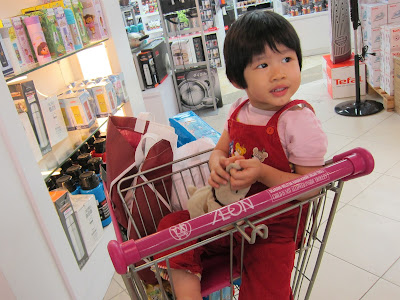 
Now that SE is big enough, she can sit in a trolley too. This one is a bit risk-averse/kiasi though - must hold on with her little hand! 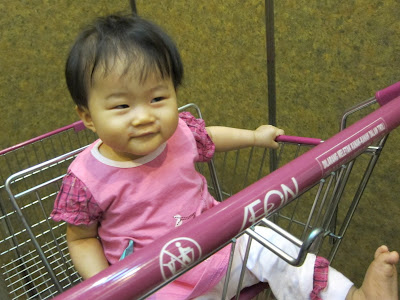 And if we're not buying much, both can go in one trolley. 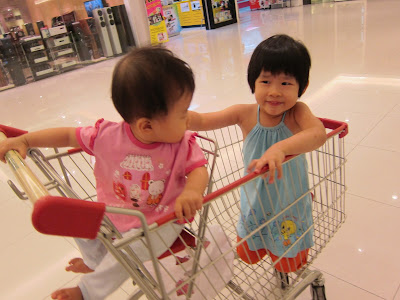 Heheheee
(Notice SE is hanging on tight with BOTH little hands!)

This was a most memorable birthday because for the very first time in my life, I have a daughter singing 'Happy Birthday' to me. :)  *sniff*  She sang the night before too.  I was hoping she'd sing for me on the actual day but couldn't bank on it coz the toddler is temperamental. But I was ready... bought a slice of cake from Secret Recipe with a couple of candles.

We went to a nice Chinese restaurant. The food was good. JE was happy, talking away and eating well. But little SE was very cranky! She bawled so much that patrons from other tables started looking over. I gave her something to play with, she banged that thing on the table and made so much noise that I took it away.  At which she bawled even louder! Oh dear oh dear. In the end hubby wolfed down his food and took her out of the restaurant. 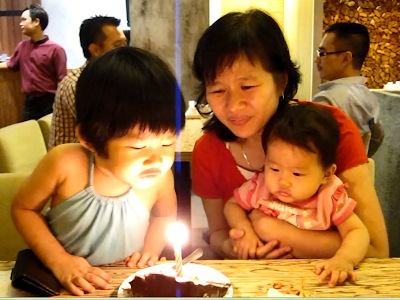 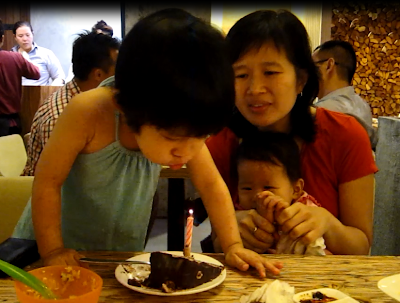 It has been 1.5 months since we packed Reyme off. Not without some difficulty. She'd demanded multiple times to return to the maid agency. We agreed to take her on Sunday.  On Saturday morning, she packed and demanded to be sent back. Since she obviously wasn't going to work, we paid her and called her a taxi. But when the taxi arrived, she refused to leave! We insisted. Finally she got into the taxi and we heaved a sigh of relief. 10 mins later, the taxi returned. With her inside. Apparently the agency was closed early due to a political rally. What a waste of the taxi fare that hubby paid in advance! Taxi driver sped off, having had enough drama on his hands. What to do, we had to let her in again. On Monday, hubby personally ferried her to the agency. At least that way we're sure we'd seen the last of her!

Having Reyme was good in one way. Everyone was so happy to be rid of her that they were willing to work extra! Me included. Even though it hasn't been easy. I get back from work and cook dinner, feed JE, do dishes, wipe table/JE's chair/floor, prepare baby food for SE, cut fruits, feed SE and then wash up. By that time it'll be after 9pm, less than 1 hour before bedtime. Hubby would watch the kids (and the TV) while I attend to the chores.

Weekends I wake up early to clean the floor and toilets. I also took annual leave to catch up on chores and baby-food-making. Having kids is double-edged - it means having more to clean and also more REASON to clean. Can't be having a dirty house when JE is roaming around touching everything and SE is crawling about! From me, the house got cleaned twice a week, laundry was done twice a week and the aquarium once every 2 weeks.

Hubby took up fewer chores (what do you expect of Mr-Only-Son-With-4-sisters heh) but he did water the plants, bathe the kids and occasionally wash the cars. 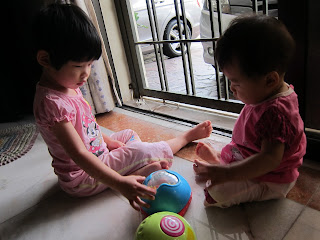 Overall we managed. On the plus side, it was nice having the house to ourselves, doing things and going about without having to think of the maid. And hubby was home more instead of being with his drinking buddies. The biggest minus to me was sacrificing time with the kids. While hubby disliked having to watch them at all.

Our new maid should be coming this week. Hope this one will work out. 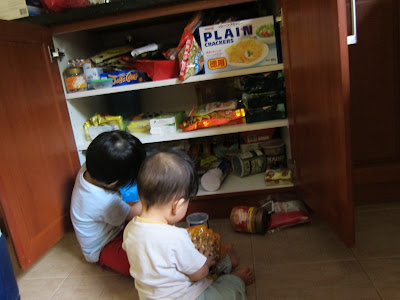 And we both help with the snacks ok?
(Heh both love messing around in THIS cupboard)