I had a scare a couple of weeks back.  I had closed my eyes when JE/SE wanted a bedtime story and to play. So I got up for a while. Suddenly, everything seemed to spin violently. I managed to crawl back into bed. It was a strange end to what had been a perfectly normal day. Thought a night's sleep would cure it, but the world was still spinning the next morning.  It was so bad I felt nauseous, and had to hold on while standing.

Since then the 'attacks' hadn't been that bad or that long. Still, I would have them at least twice a day.

Last weekend I took a blood test together with hubby. The medical centre called back to say there was something abnormal in the blood work and recommended an appointment with their specialist. That set me off on a morbid train of thought. And I knew that, more than anything, I want to be around for my girls. I want to care for them while they're young, to be there to support them when they're older.  Their world will definitely be better with me in it!  (I don't plan to be taking care of my grandchildren... but who knows? Heh)

Collected the test results yesterday.  The GP said everything looks fine.  I didn't bother to enquire why they suggested a specialist - this is the most inefficient medical centre I've ever seen (they actually misplaced hubby's report and took ages to FIND it!) and I don't know whether they even know who called me!  For now, I'm going to give it some time. Maybe the vertigo is due to some ear/balance problem.  Hopefully things will improve. If not, I can deal with it if the attacks come at specific times.  And I can definitely accept it if it means I don't have something life-threatening!

Hubby has been solicitous, which is unusual for him. It's rather nice, actually. Wonder how long it will last!

I want to see more, A LOT more, of these two: 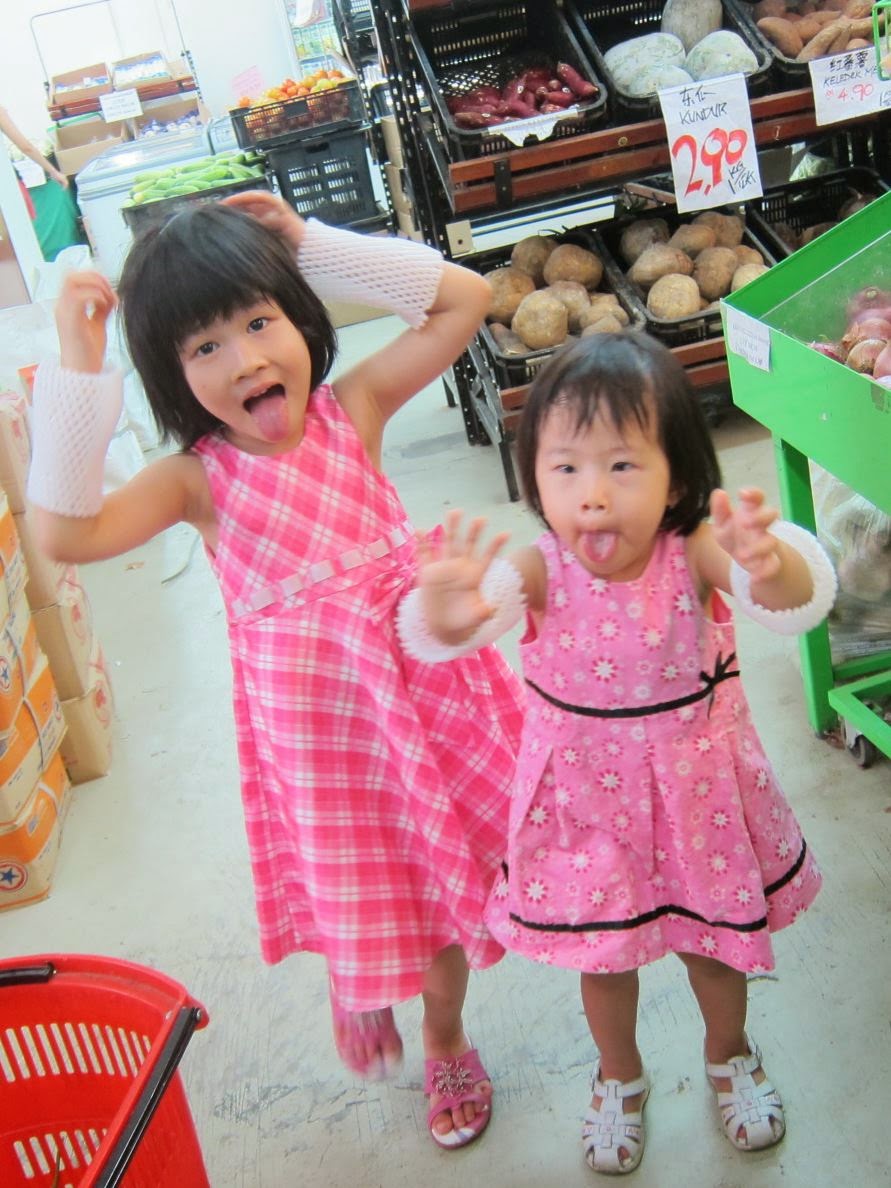 It amuses me when SE is the good little sis:

And it continues until either one of them move on to something else.

Caught the little one on camera following the big one... 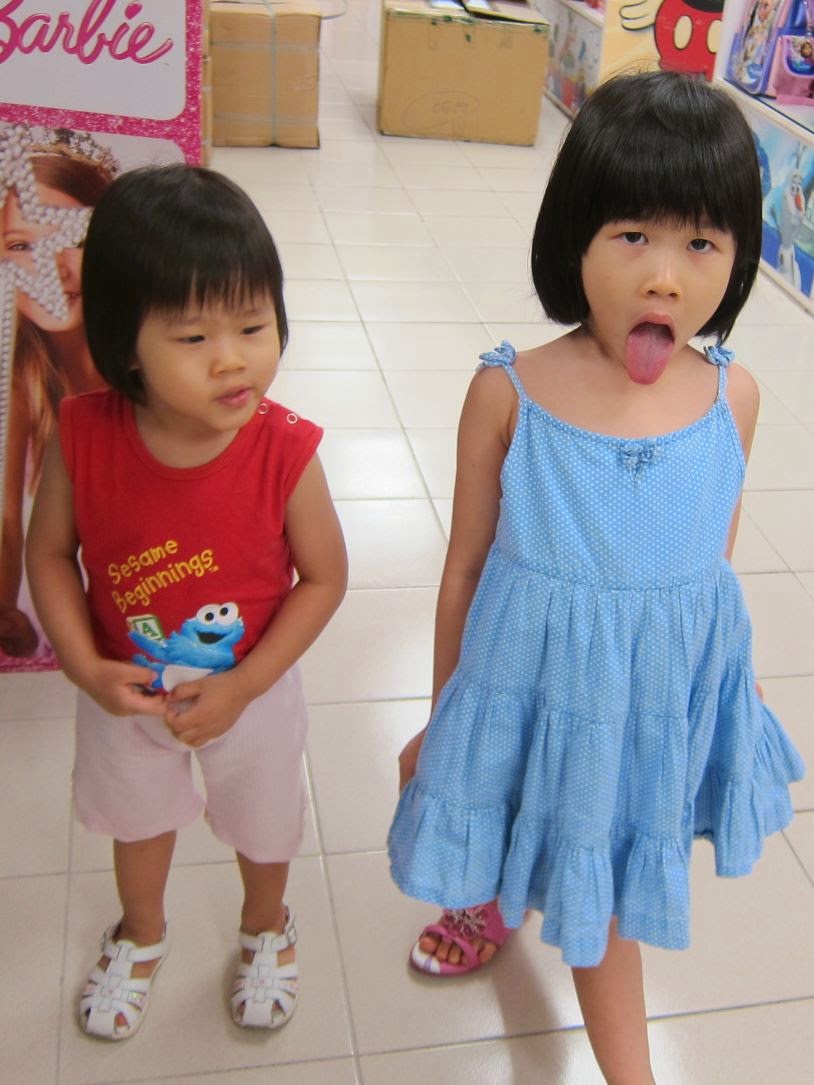 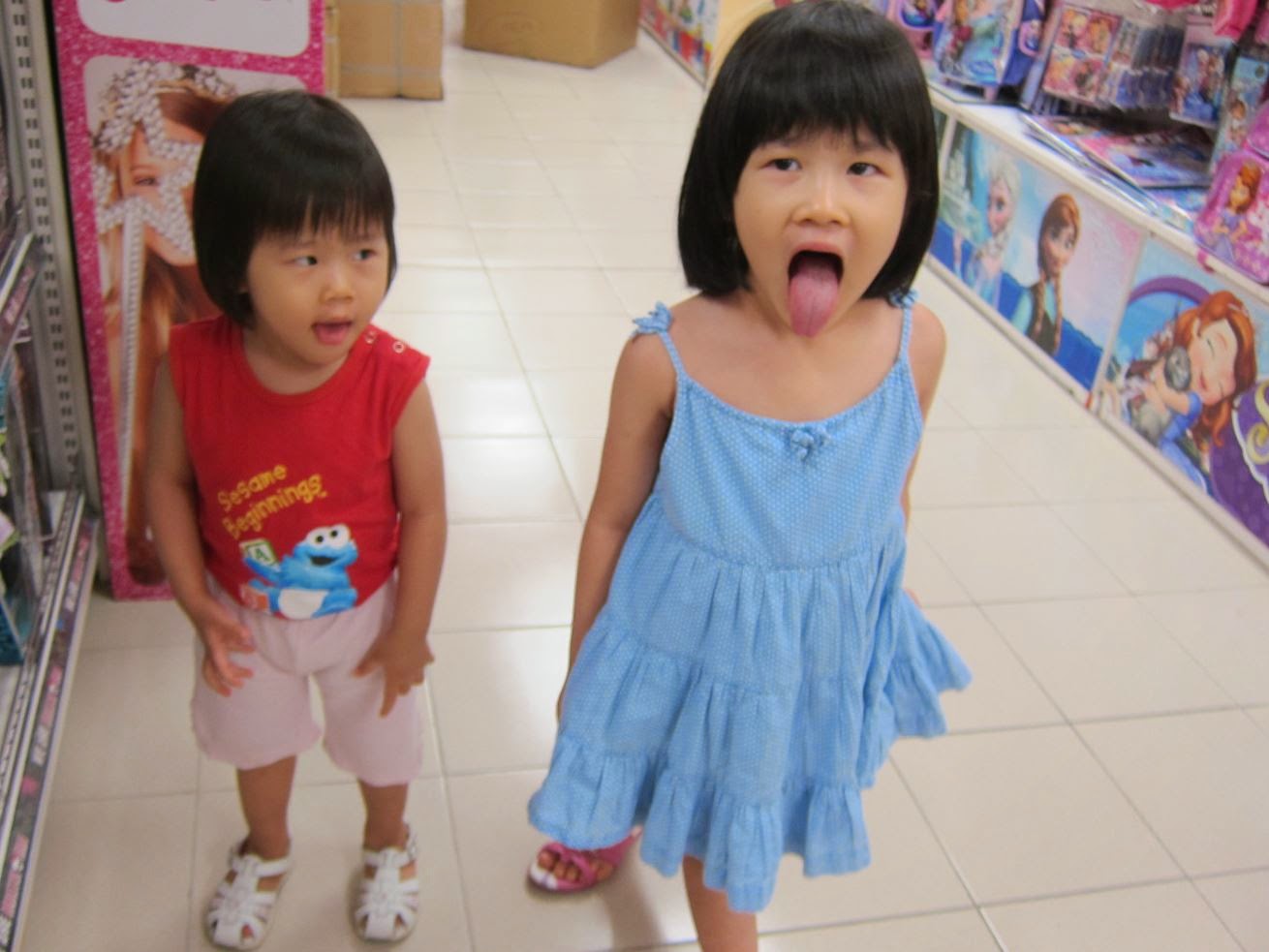 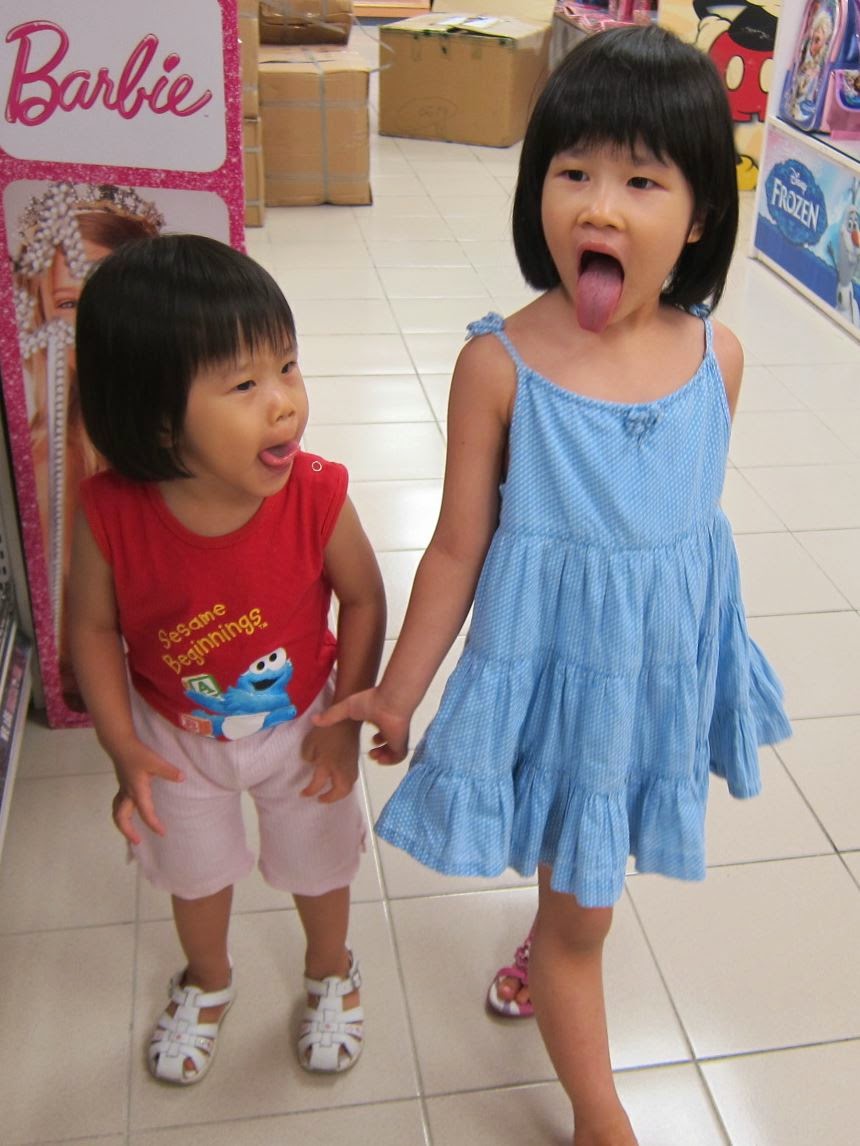 Oh dear, another iPad addict. This one is pretty far gone too.  She wakes up, goes downstairs and her head swivels around looking for the device. I pry it from her fingers eventually and she screams bloody murder. And looks around for someone to complain to that Mummy is naughty.

Guess she'd have been happy left alone the iPad! Until the battery runs out and she's all alone in the dark, that is.

This girl is super stubborn, no point setting time limits. Need to start hiding the device until she forgets about it. 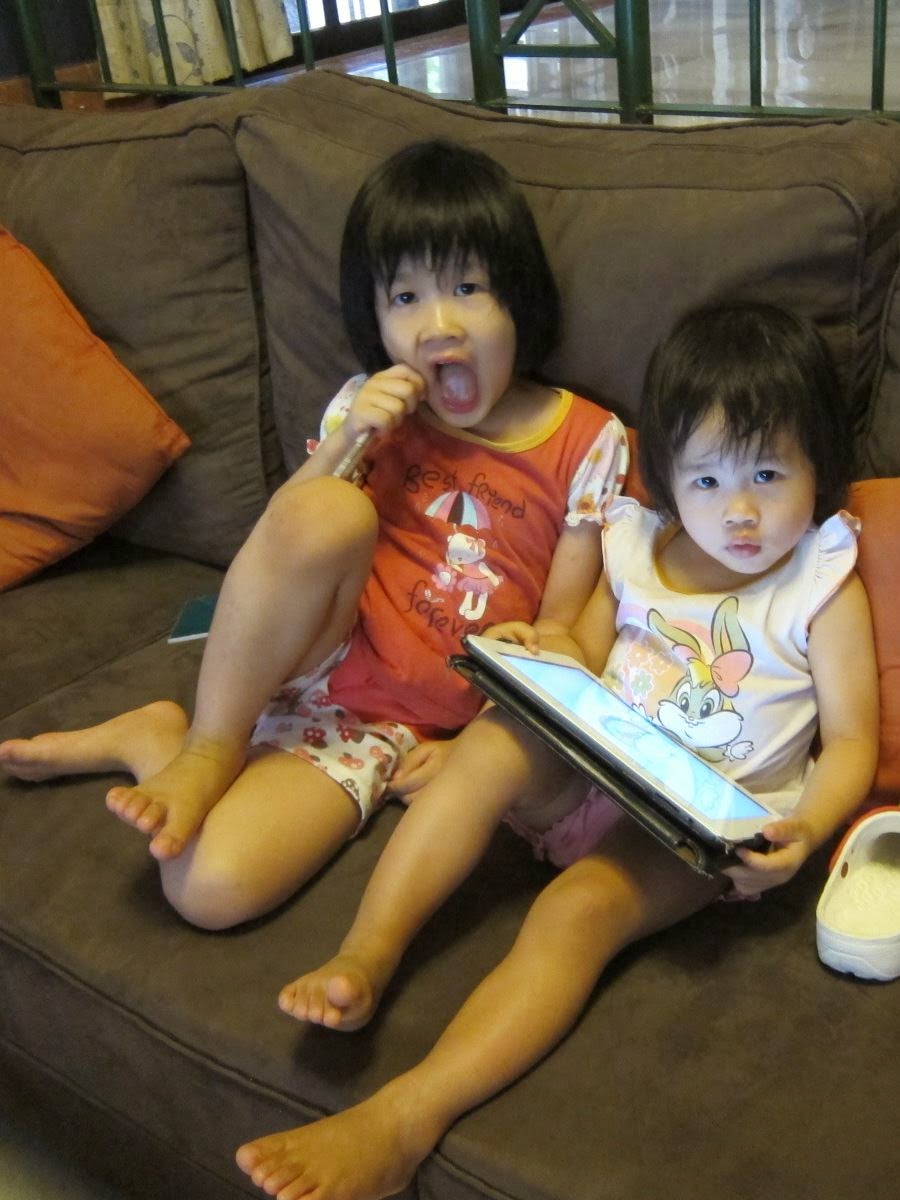 Do what you like, just don't take away my iPad

We celebrated Ah Mah's birthday at Unique Seafood in Kota Dsara.  It was not crowded and easy to book a private room (not sure if this kind of outlet can last though!).  There was karaoke provided, which the kids enjoyed... 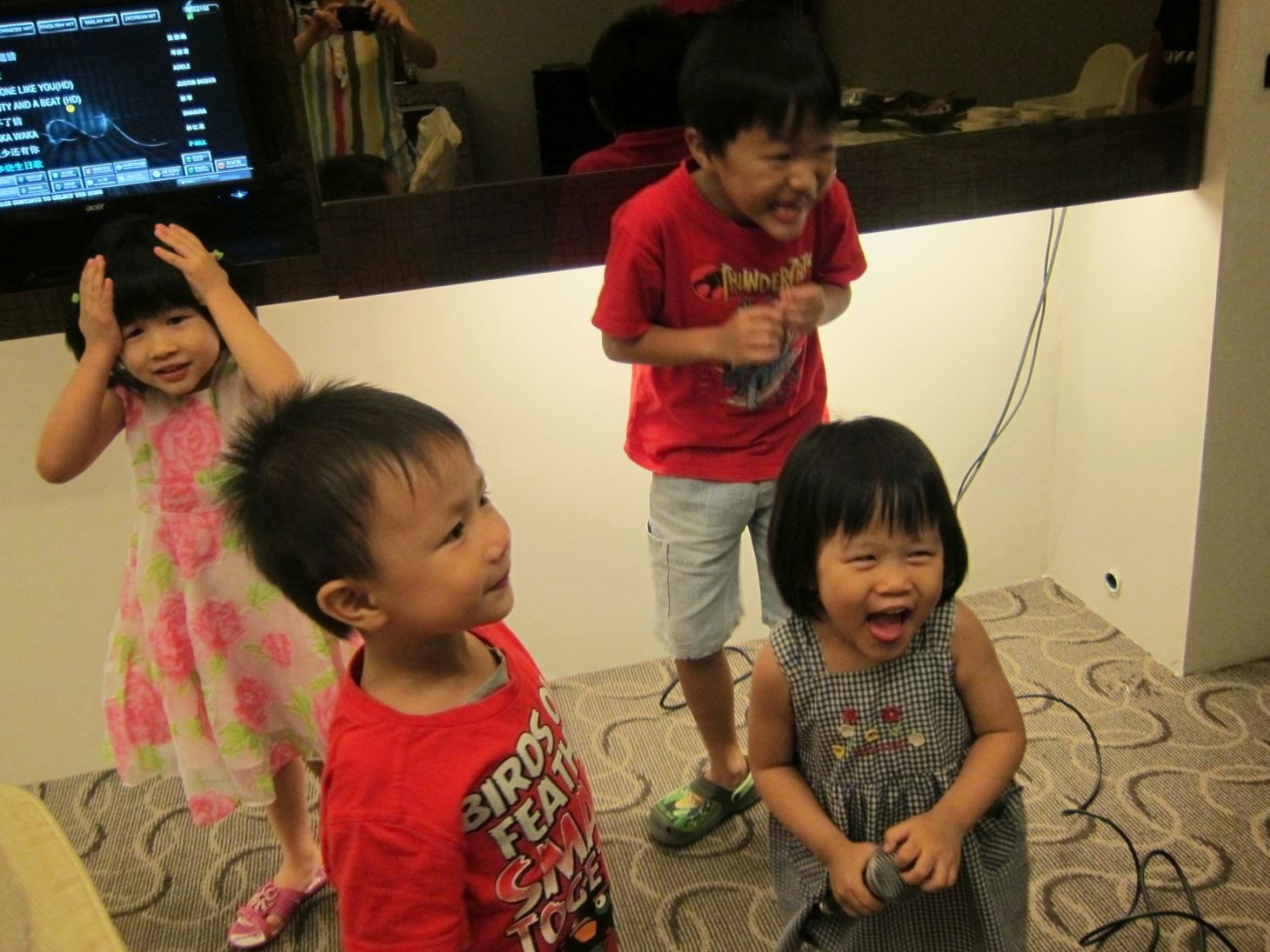 Wow I took pictures of food? Must have been good! These dishes were actually, cost almost RM300 each but were the highlights of the dinner. The other half of the giant tilapia was simply sprinkled with black pepper and grilled (also good but not posting up here coz not photogenic). The other dishes were spicy japanese snail, ginger-spring onion venison, lemon chicken, 2-style kailan, hotplate tofu and birthday noodles. 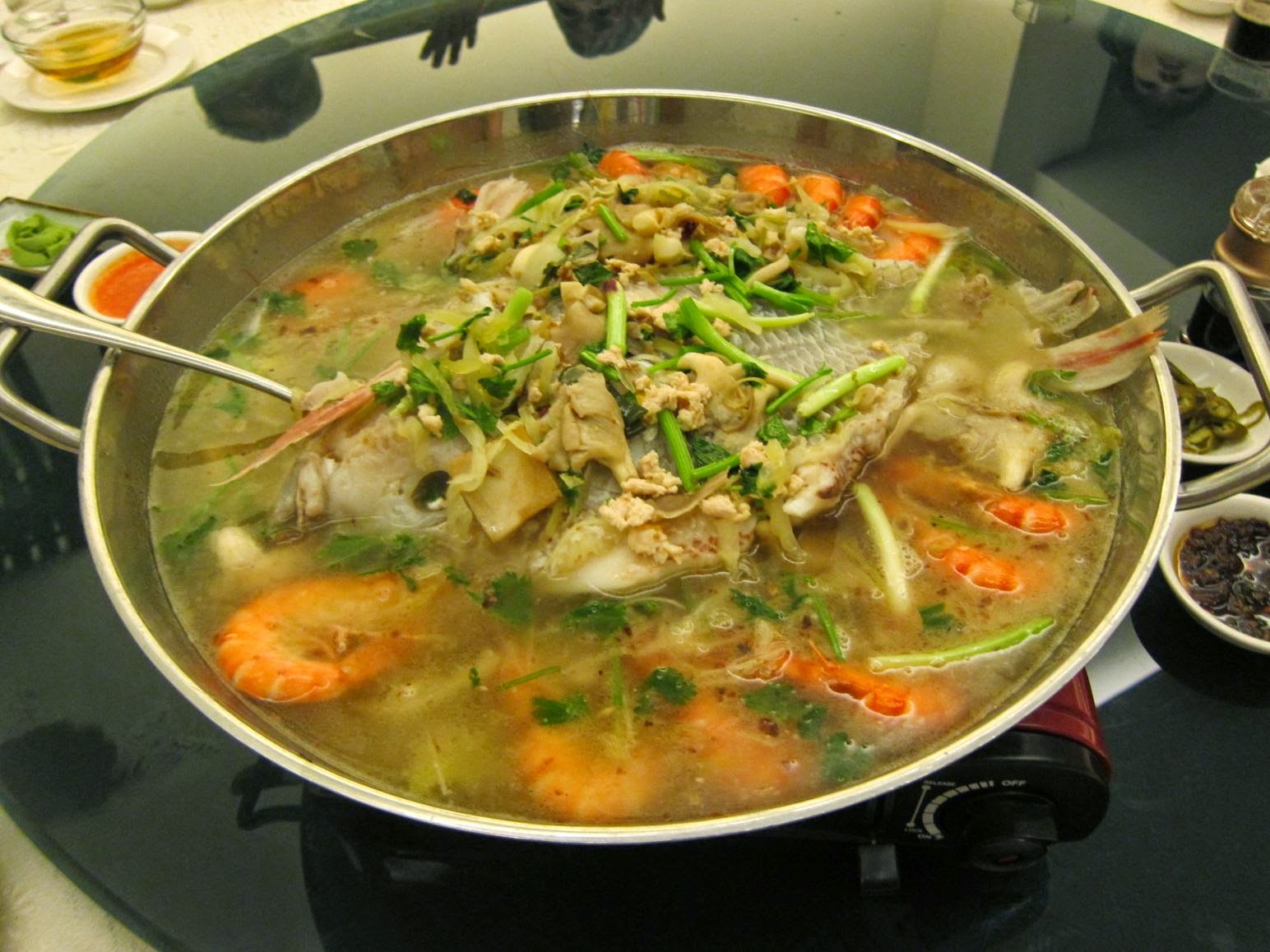 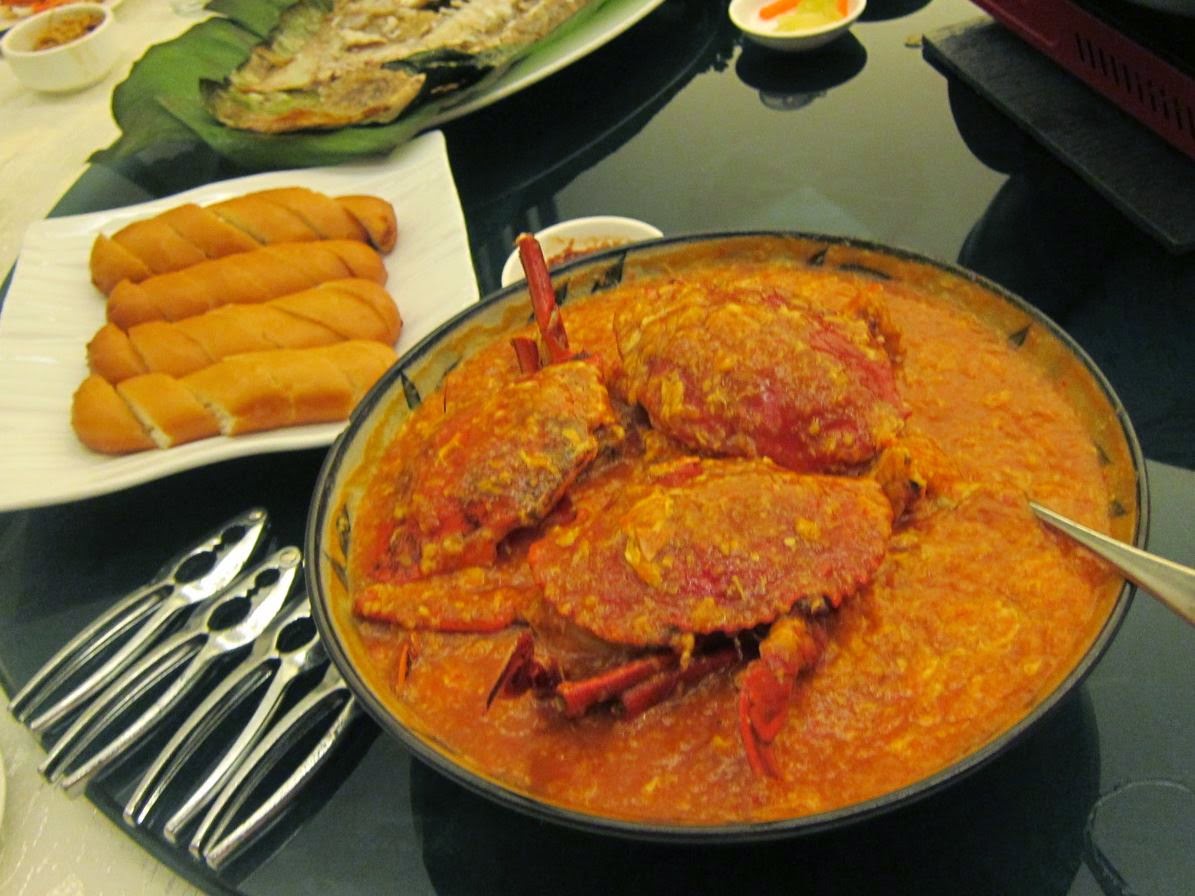 Sis made the cake and it turned out fine (unlike last year where cake apparently collapsed and we ended up with Secret Recipe). 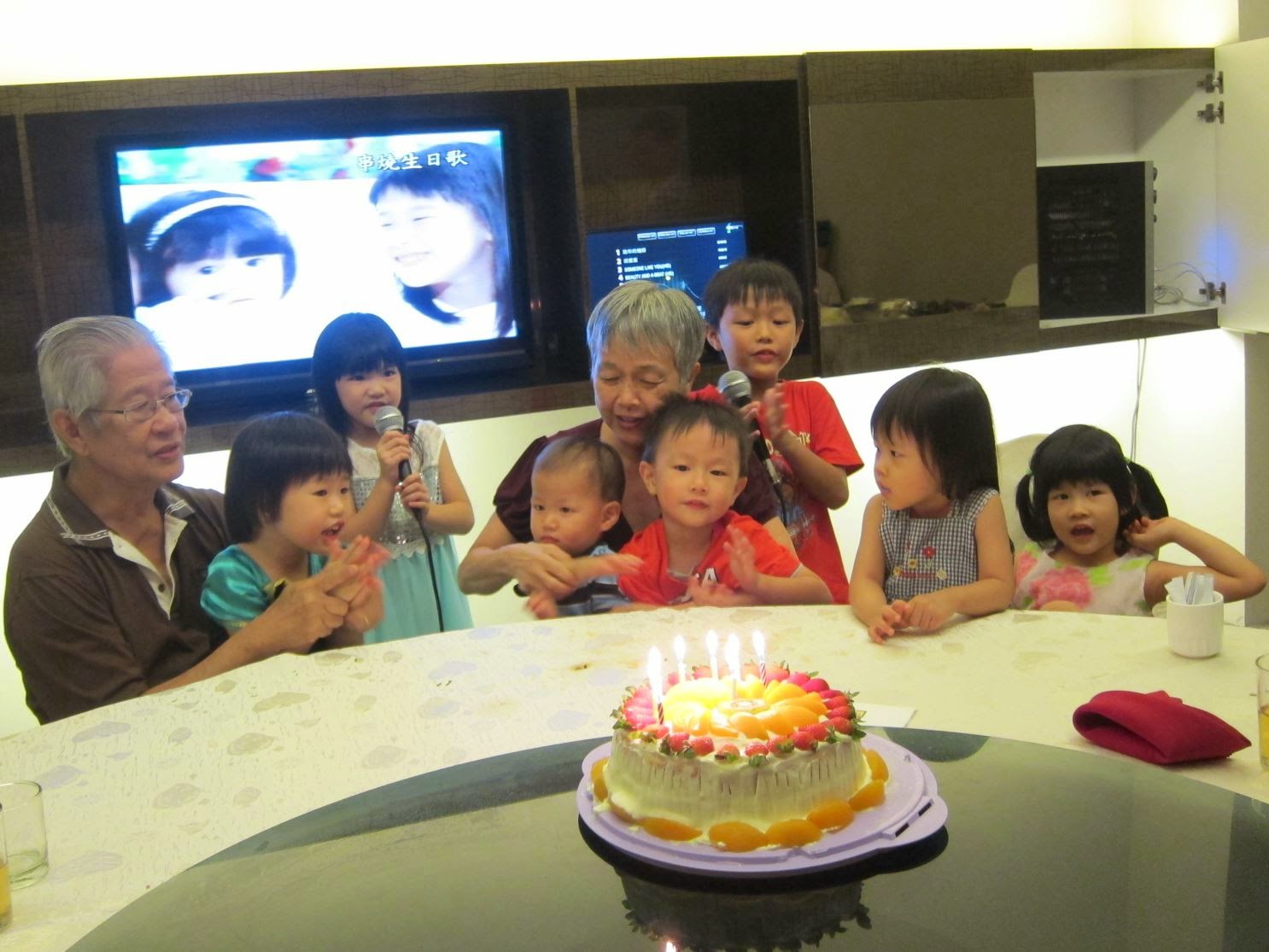 Err SE, it's not your birthday yet you know... 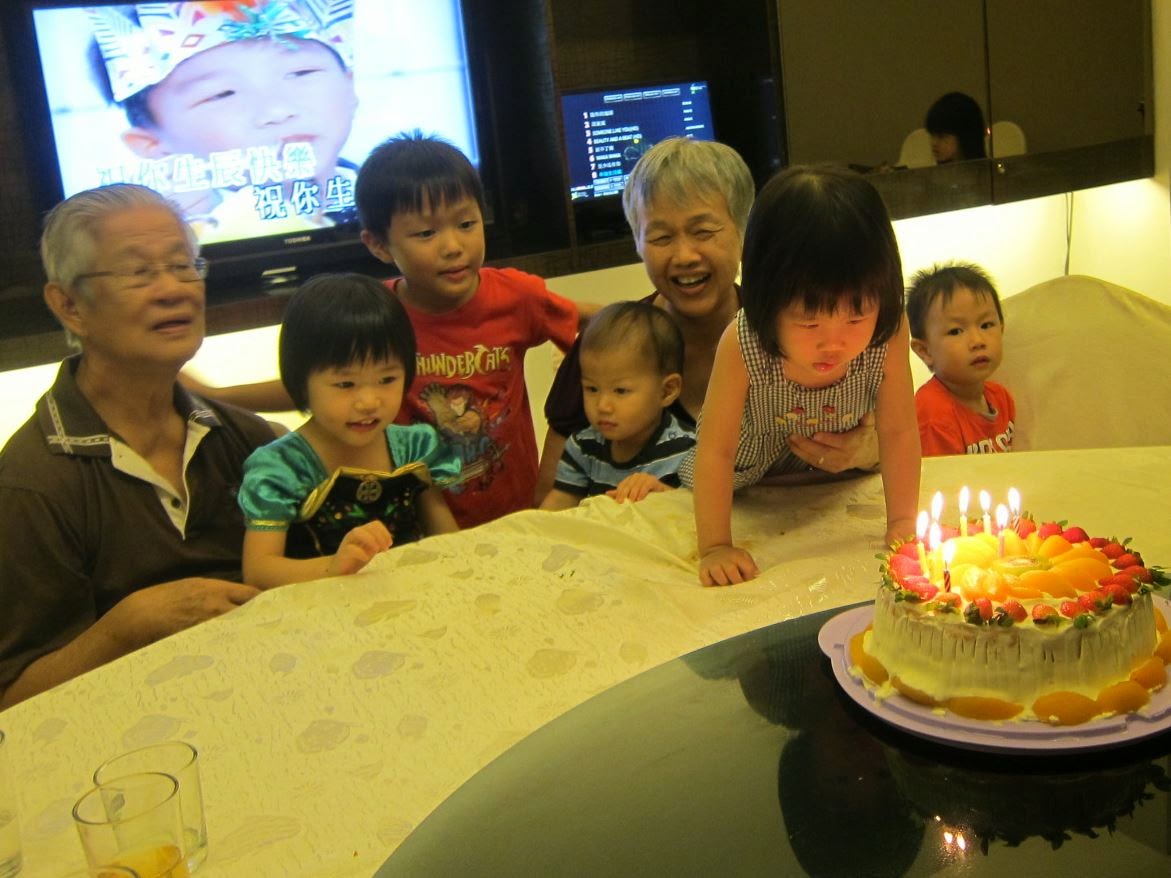 Let me at the candles, I will blow them out

Happy birthday to my dear mother and here's to many more birthdays to come!

Hubby and me aren't that big on our own celebrations. Initially we went out for special anniversary meals - I recall having a very raw steak at a French restaurant! Then we just went to simpler places we know we like. Two years ago he forgot and I almost did. Last year I forgot as well. Haha.

This year we went out for dinner... with JE, SE and our maid too. Well, we don't leave the kiddos by themselves at this young age. And driving to my parents' place to drop everyone off would be too troublesome (for them obviously, and us also as their place is pretty far away)

We had dinner at the Ship and coincidentally both girls were dressed in a nautical theme! There was a birthday party going on and we appropriated some balloons for JE and SE. How come an anniversary dinner becomes a kiddy event too?  :)  Hubby has promised me an anniversary present so I still have something to look forward to! 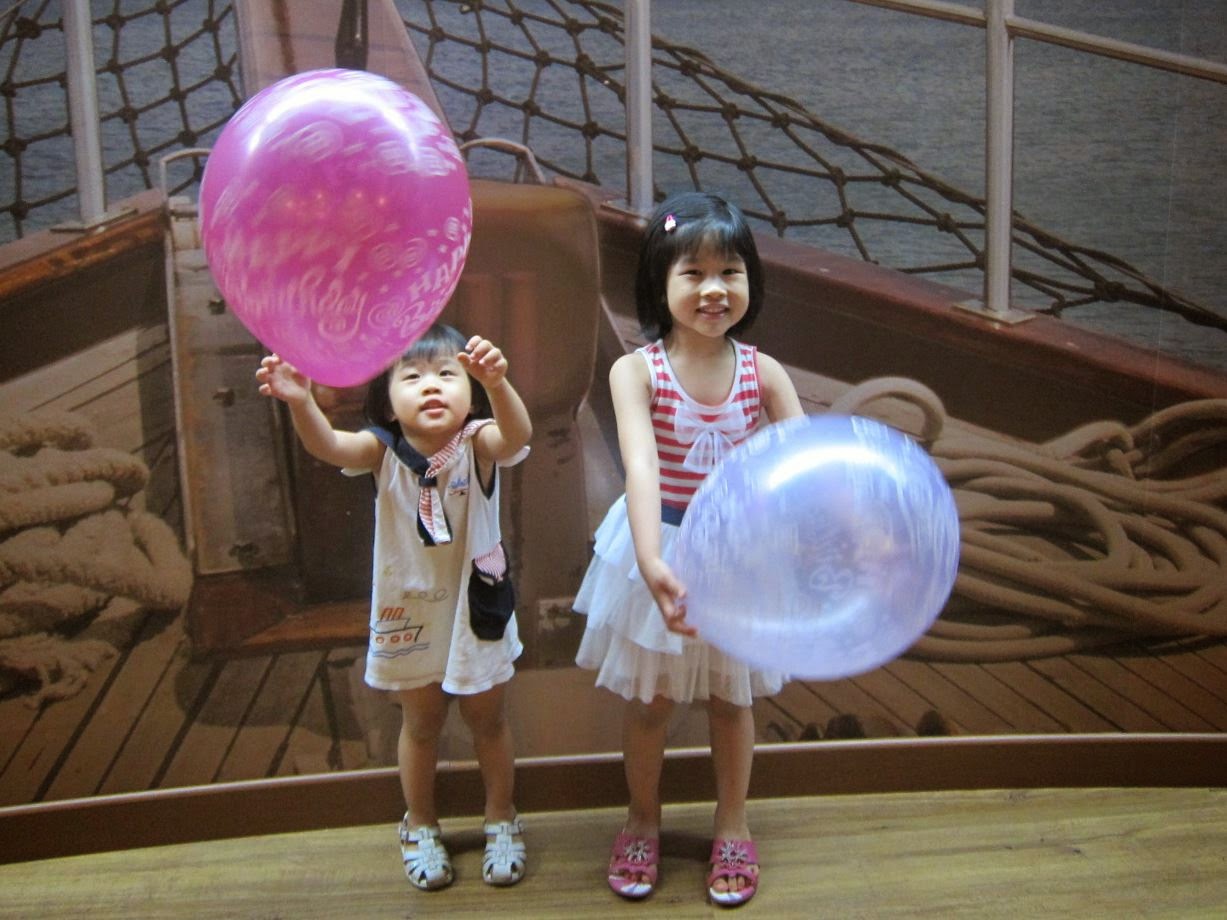 Balloons for us, yay!

These days, I often find a mermaid sitting in my room. She usually wears a necklace and sunglasses. And she looks like this: 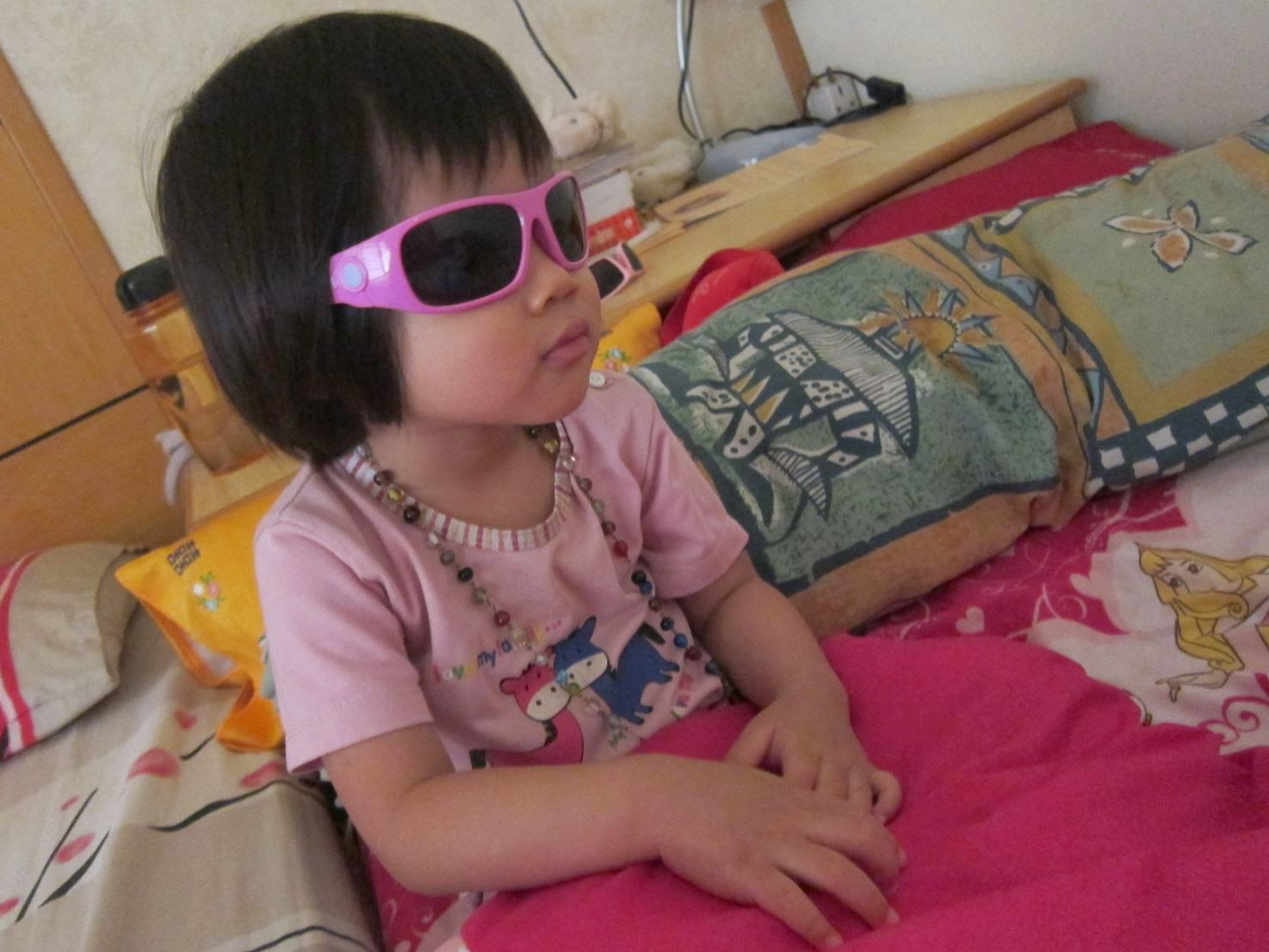 She will respond to requests for a photo.... 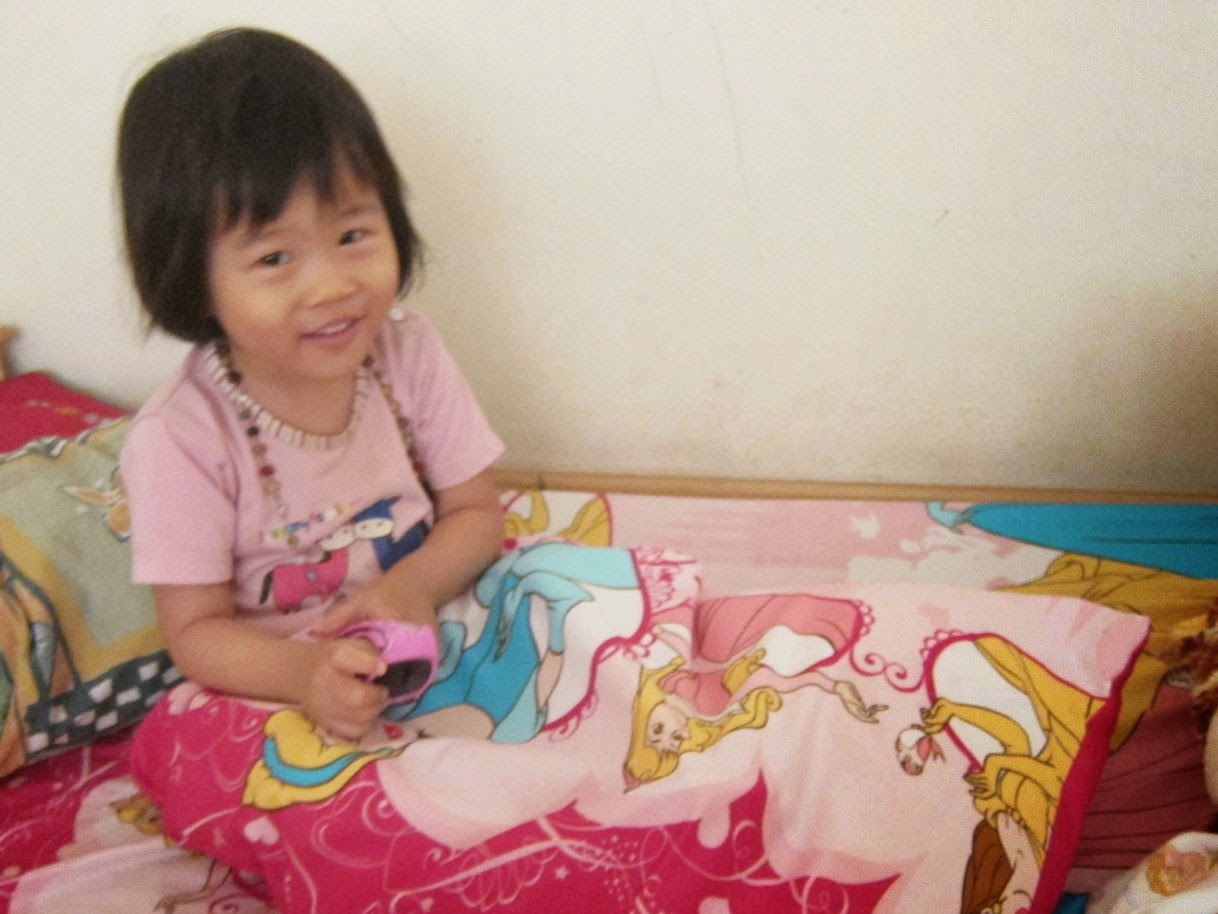 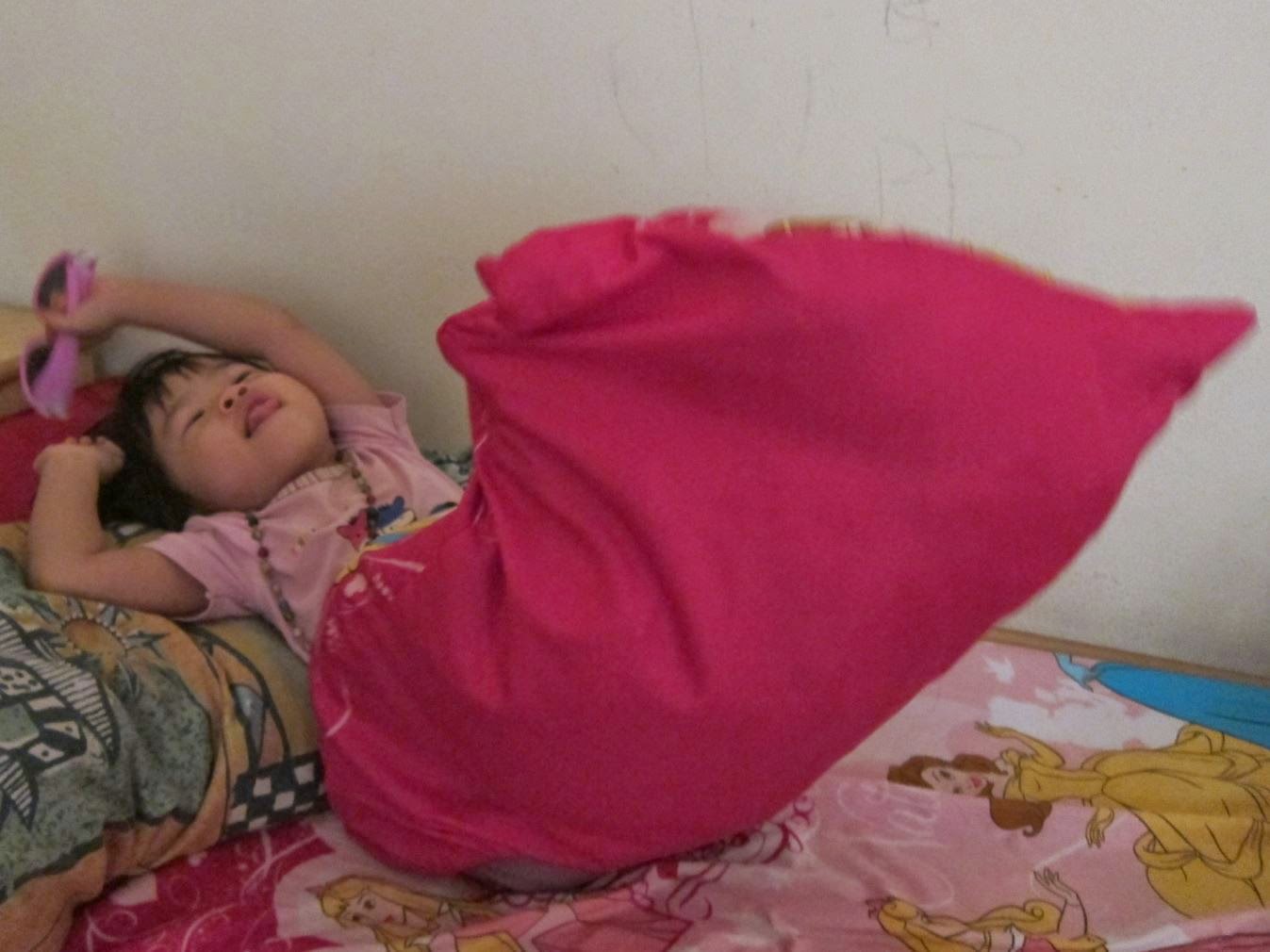 Today my tail is pink

Hehe the kiddo. Yep her legs are stuffed into the pillowcase! And she will tell all and sundry, "Mermaid cannot walk, mermaid can swim",

My girls do fight, but they are close to each other. So one night, JE was to follow me upstairs to brush her teeth. She asked me to bring some of her pyjamas from the cupboard downstairs. I told her no need and continued upstairs with my arms full of other laundry. Whereupon the kiddo decided to bawl. Loud and louder. I didn't bother with her, just continued putting the laundry away.  Later the maid reported this conversation with SE that happened when JE was bawling...

Oo-kay. I foresee future sessions of Team JE/SE vs Mummy! 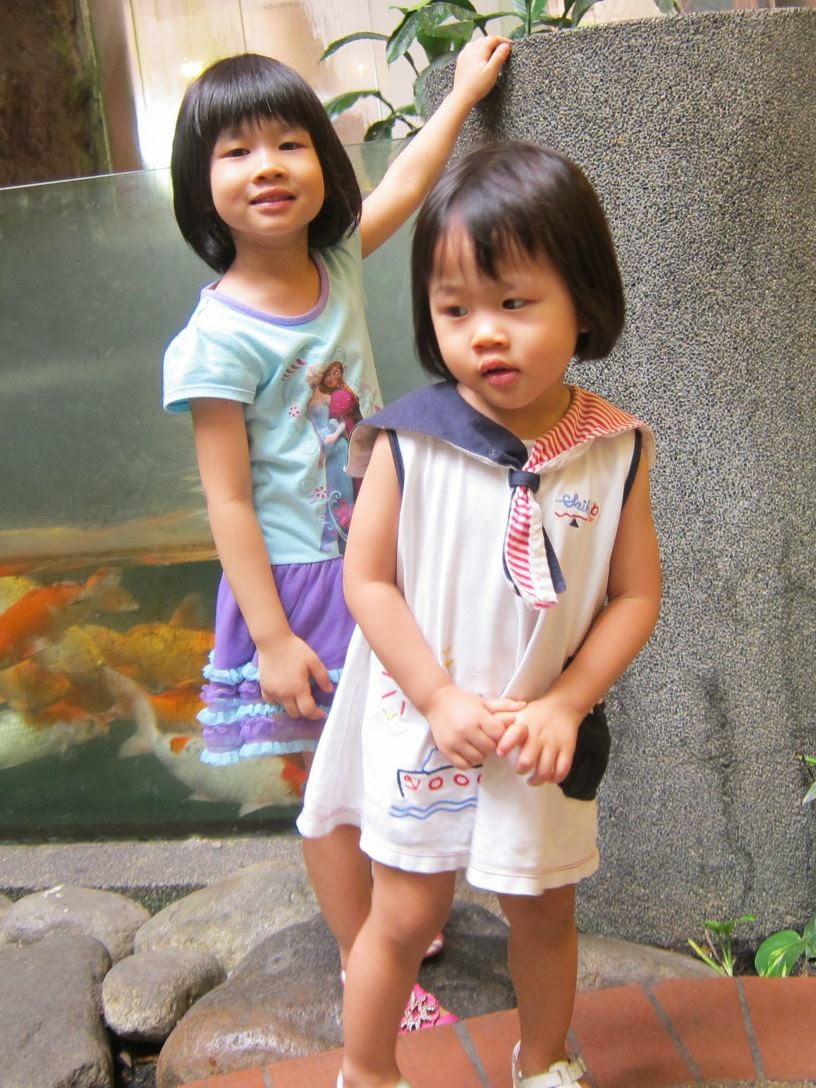 I don't normally buy things for SE (poor kiddo!),  She is just supposed to take over once JE outgrows them. Or in the case of toys, take turns with JE to play with them. She tends to want whatever others are having though. And bawl loudly when she doesn't get her way. So recently I have gotten a few things just for her. Like this scooter and she was thrilled! 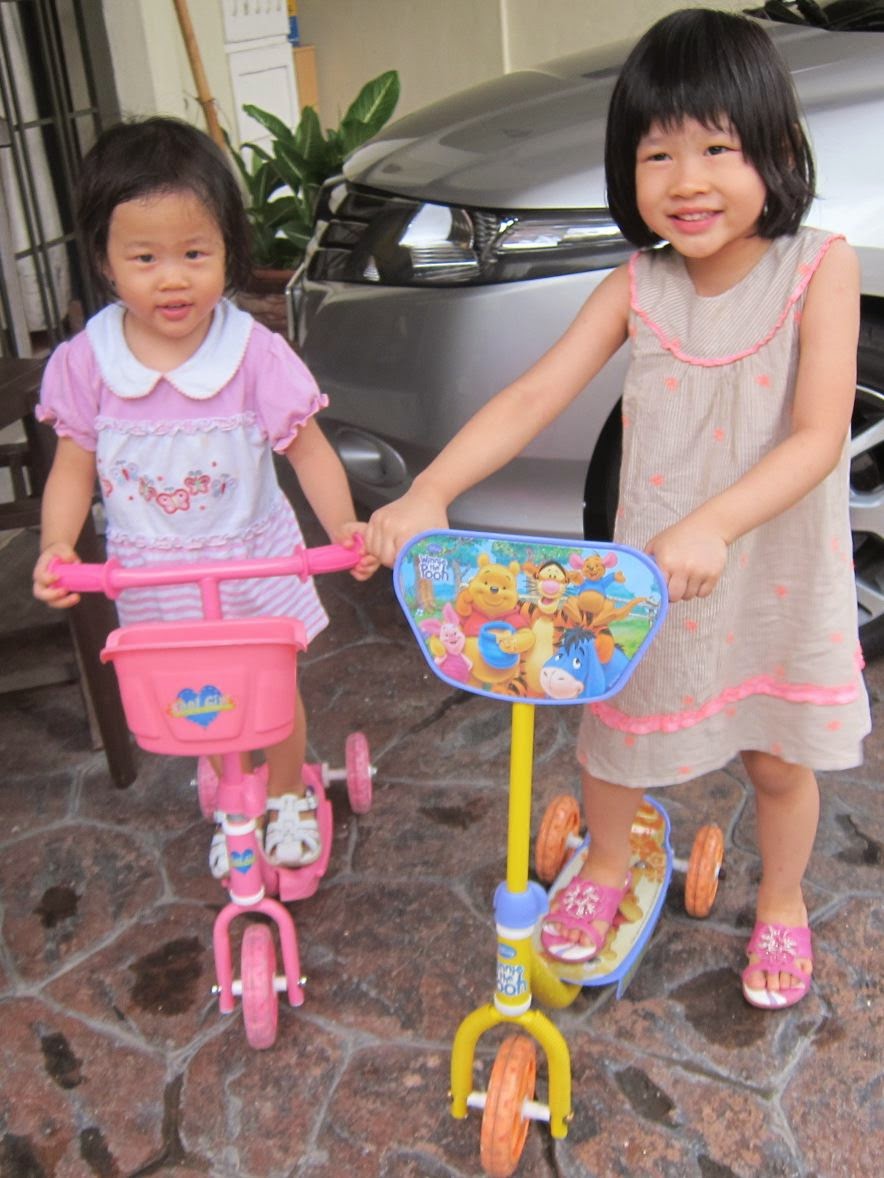 SE: I have a scooter also!

Conversation with 6yo neighbour who came to our gate on her scooter...
Girl next door: My scooter is red
JE: Mine is yellow
SE: And maih ih...peeenk (And mine is PINK)

Amused me the little one is following and even joining in the conversation!
Posted by Stacy at 2:05 AM 4 comments: