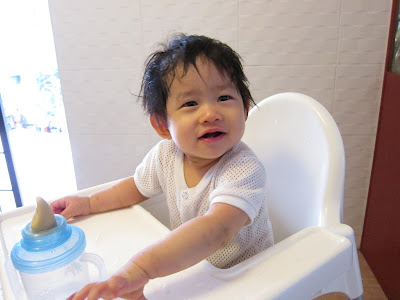 Throwing water everywhere and all over myself is really fun! 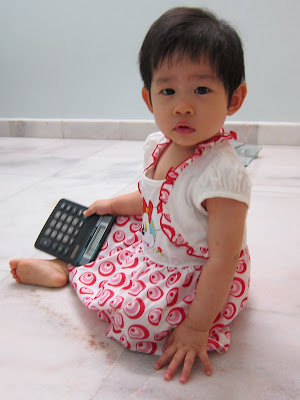 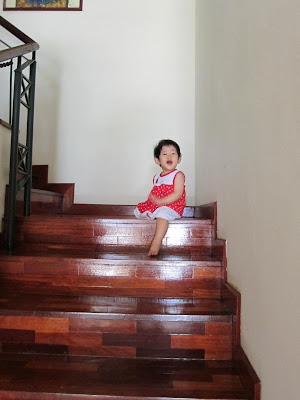 Woo hoo! Climbed up here all by myself!
I have just ordered a few toys online. In the meantime Jo Ern is quite happily entertaining herself. My house is so NOT baby-friendly. We have multiple staircases, lots of glass objects, exposed electrical equipment, a cream-coloured sofa, a big German Shepherd outside... heh. Of course, Jo Ern has no problem with any of these!
Posted by Stacy at 2:19 AM 1 comment: 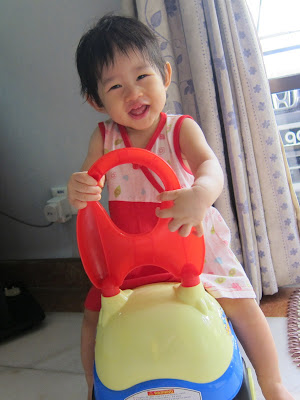 I have a car!  Got this for my birthday 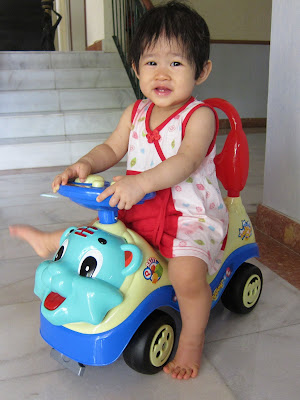 Oops just now was sitting backwards.  Heh.  Now sit properly already.
I scratch my head sometimes how to occupy Jo Ern.  After subtracting slots for sleeping, eating, bathing, carrying her around etc, there're still quite some hours for playing.  I let her roam around and climb the stairs under supervision.  Eventually I find myself heading for the same toys and wonder if it's boring to a small child.  Luckily she got new toys for her birthday.  Maybe I should buy a few more.  What she definitely likes are to mess around with things like the dustbin, the broom, the drain cover, the insect spray... haha.  Dunno why the little one is especially attracted to things she SHOULDN'T be playing with!
Posted by Stacy at 2:22 AM 3 comments: 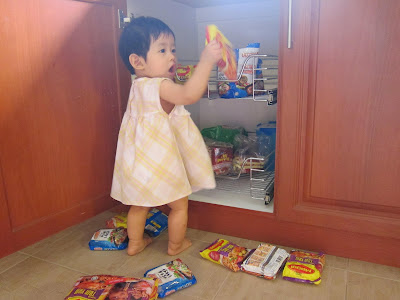 Ho, this one is reaching expiry date 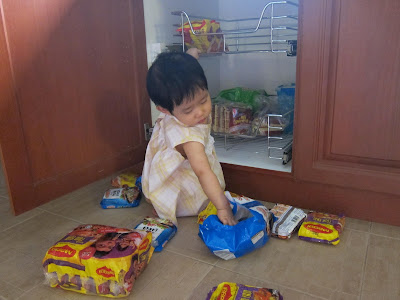 Must check inside the big packets also
Sometimes, I just need to keep Jo Ern occupied so that I can get things done.  I figured the Maggi Mee cupboard was a relatively safe play-place.  :)  Diligently, packet by packet, she took them out and put them on the floor.  The 'assam laksa'-flavoured ones were still in their outer packaging.  So she got to work on them, took out each packet and put it on the floor.  Hmm looks like this little one can be quite meticulous!  Next I must teach her how to put things BACK.  Hehe.
Posted by Stacy at 2:02 AM 2 comments: 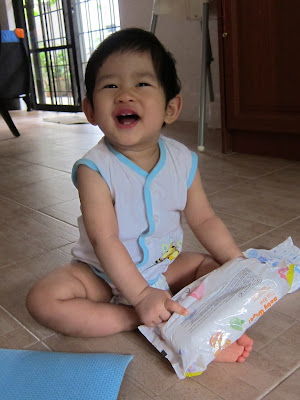 My new teeth are at the top. Now I can BITE... arhmm!
Four TEETH already, I mean.  But the new top teeth are much bigger than the two bottom ones.  And there's quite a large gap in between.  Hope this doesn't mean orthodontic braces in the future!
Posted by Stacy at 12:10 AM 3 comments: 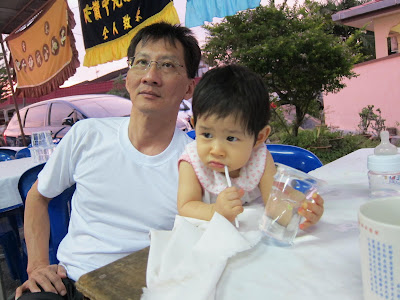 So many people here. Tai-ma must have had a lot of friends
Yesterday was the funeral of my grandmother, or Jo Ern's Tai-ma (great-grandmother) in Taiping.  There goes the last of my grandparents.  I find her passing a sobering reminder that death is inevitable.  But she lived till 96, a good long life.  She was reasonably healthy until almost the very end and I'm glad she didn't suffer long then.
We were exempted from many of the rituals since we had a baby with us.  Jo Ern behaved very well though and actually sat through one of the prayer sessions. Well ok, I was prepared with a celery stick for her and she just sat there without a peep chewing on it!  No pictures since whipping out a camera didn't seem appropriate. 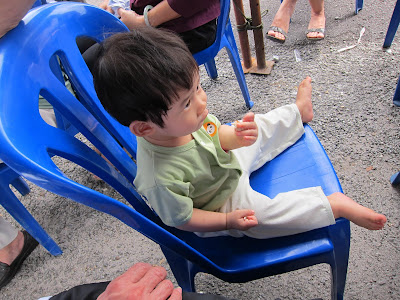 It's time for my lunch but this bread will do since Mummy is busy
For the wake that night, attendees were served peanuts, red bean soup, barley-gingko and vegetarian curry mee.  Hmm rather sumptuous food, no?  But an uncle told me this is quite common these days.  I guess people needed more sustenance since prayers went on till midnight.  Goodbye and RIP, grandmother. 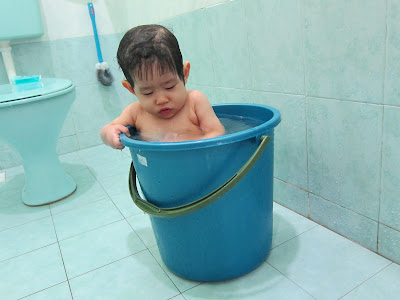 Nobody brought my bath-tub... lucky got this pail to pom-pom in
Posted by Stacy at 1:20 AM No comments:

Gentle, but not all the time 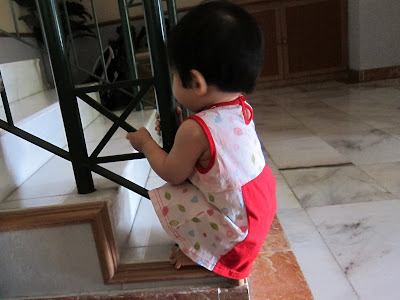 I climb up the stairs, wheee
Jo Ern has been branded the 'good' kid, which is mainly in comparison with her 2-weeks-older cousin Jensen.  At her birthday celebration recently, my aunt said she was really 'gentle' and feminine.  Well that's coz Jensen was screeching away at the time while Jo Ern was going 'ai yaaa' softly.  But I find she can be quite a handful too.  Especially now when she can move, stand and climb.  And she will cry loudly when prevented from doing what she wants. 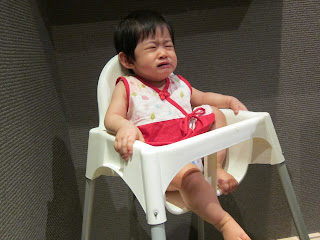 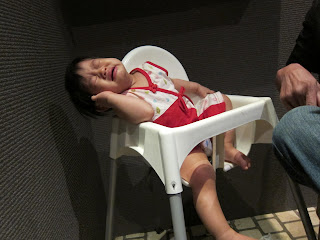 Don't wanna SIT, don't WAAAANT!!
Of course, she got her way eventually... as usual.  Err when should discipline for babies start??
Posted by Stacy at 2:31 AM 3 comments: 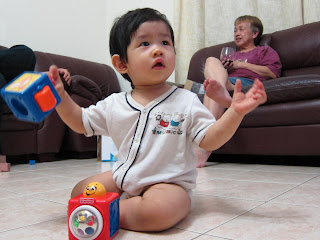 I get new toys today coz it's my birthday!

Has it been a whole year with little Jo Ern?? My precious girl turns one today! It feels like a blink of an eye. Other times I think, all this time and Jo Ern is still only a baby. I'm happy with that though. Here's to many more happy years together!

No offence to those who send baby to a full-time babysitter, but I wouldn't have missed Jo Ern's first year for the world. Hubby had suggested that option which is common practice on his side of the family. Then there would have been no disruption to our schedules, no crazy daily commuting between our house and my parents' at different ends of the city, no need for a maid, no sleepless nights tending to a bawling sick baby.  But there would also have been less time with our cutie-pie, less bonding, less joy.  I wouldn't be able to look over any time of the night and see my little daughter.  For me personally, it's no contest.

On to the birthday girl:

Skills
New skills seem to come all at once to Jo Ern. One day she can't do something and the next day, she's doing it fine. She can drink from a sippy cup after weeks of coughing on the water flow. Last night she suddenly could climb DOWN the stairs (*faint*). She has been happily wobbling her way up for quite some time now. She also extends her arms to be carried, which makes people melt and carry her more!

Speech
She 'talks' a lot! Her favourite words are 'ai yakk, ah WAKK, ah BEHH, ah DEHH, ah VEHH'. Seems to be practising her consonents, heh. She loves holding objects to her ear and going 'Ai YAKK!! Ai YAKK!!'. Funny, we don't use the phone THAT much... (or do we? :) ) Ah Mah says she's 'calling her friend'.

Character
Not so scaredy-cat already! She allows more people to carry her. Good thing she does get over her fears eventually.  Like she used to be terrified of the green rocking horse at my parents' place, now she rocks on it like a pro.

Weight
Just over 8kg. A full kilo away from the 'standard' of tripling birth weight by the first birthday. The paedi recommended to add butter, cheese and oils to her diet. I am, sparingly and slowly... don't want her to develop a taste for fatty stuff and having a weight problem later.

Food
I started preparing a 'breakfast' of veg soup or oats+fruit, but she got sick shortly after and breakfast mostly ended up in the bin. She's back to two solids a day. But she has bread, sometimes with cheese, in the morning. She gets some food at dinner time too. I'm not up to speed on that yet though - it's ideally something she can eat by herself. Baby biscuits are too sweet and I hesitate to give her bread too often. Sometimes she has oats but then the maid would have to feed her in between her own meal.

She looks up in anticipation whenever she sees others eating. Then she comes over and loudly insists on having some!

Milk
Still being breastfed. I'm thinking of what formula to start her on. Maybe soy milk or Pediasure because of the stories surrounding cow's milk. Then again, cow's milk is supposed to result in bigger bones and Jo Ern has a small frame, so maybe a round or two of cow's milk might do good.

What else...
After a rest at two, finally the third tooth is peeking out. Probably THAT was why she was waking up so many times at night.

She is playful and giggles a lot when she's happy

Gurgles with laughter when chased

Prefers Mummy over Papa at the moment :)
Posted by Stacy at 1:15 AM 1 comment: 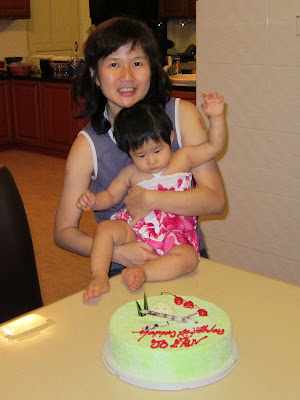 CAKE!  Want some, want some now!
For Jo Ern's first birthday, we had the celebration with family at home. Home is still best for babies since they can move around and do their thing.  The plan was to take-away 'poon choy' and buy the cake.  I only need to cook rice and veg, make fruit tea and jelly, and open some munchies.  Good plan, right?  Nice and stress-free.

Too bad my guests started arriving at 5 o'clock!!  We had gone to Tesco and tired-out hubby was having a nap, I was sweaty from sorting out the chicken and squid, the maid was cleaning the fish, Jo Ern hadn't been fed nor changed, the fruit tea hadn't been popped into the fridge... And the people arriving straight from Taiping needed the toilet, some food, drink and a shower.  It was a hot day and there was a total of 11 people in the house who needed showers!  Suddenly I was flooded with queries on which bathroom to use, how to switch on the water, where to get some drinking water, whether the mugs can be used... and requests for towels, hanky, comb, biscuits, a spoon, tissue, cotton wool/wet wipes etc.  Haha so much for stress-free!  What happened was my grandmother wasn't well and everyone went to visit her in Taiping.  My mother decided last-minute to stay on there too.

After the glitches, things went on well.  Chek chek (my uncle)'s gang arrived at a more decent time and hubby went off with my father to collect the 'poon choy'.  There was a moment of worry when the thing looked too small to feed everyone.  Looks deceive... the basin was packed.  Pretty fun searching and digging for stuff! 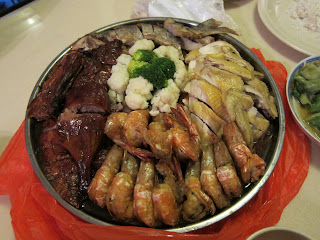 The basin with all kinds of good stuff
Wanted some pictures of Jo Ern with the cake but she was busy trying to grab it.  She did succeed when I was distracted for a while. But as everyone said, it's HER cake so it's ok!  Happy birthday, my little one!  I plan to have another small celebration for her actual birthday on Wednesday.  :) 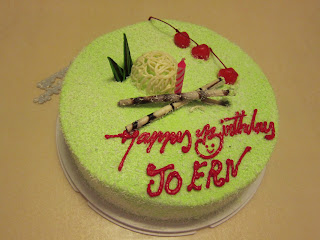