I teared up and had to walk away. Lina came when Jo Ern was 4 months old. Initially we didn't need her much. Household chores were manageable (albeit with a low standard of cleanliness!), I was breastfeeding Jo Ern, hubby cleaned her, cooking was something I chose to do myself. Lina would come and take JE off my hands once her chores were done. I didn't like that initially since I'd planned to take care of JE by myself, but eventually loved having more 'me' time!

Now that Lina has been part of our lives the last 2 years, I feel sad that she is going. I'm used to coming downstairs in the morning to her going about her chores. Being single, JE is the first child she has looked after and she mirrored my new-mother self. She'd report to me on JE's day at my parents' house while I was away working. I'd tell her what JE did when she wasn't around. We'd delight in JE's antics, be proud when she developed new skills, cluck when naughty traits showed.

To JE, Lina was someone who did everything for her - fed her, patted her to sleep, cleaned her up, carried her around, played with her. Although JE is close to me, sometimes she'd say 'I want kakak!' instead.

Oh well. I guess that at her age, she'll forget her kakak rather quickly.

I think Lina's going back to Cambodia to get married though she wouldn't admit it. I'm glad she was around at recent critical events to oversee things - when Su Ern was born, when I went back to work, when JE had her bad fall. I'm going to miss her, both for her work and her company.

We let her choose what she wanted to eat for dinner on her last day, and she picked BBQ plaza. 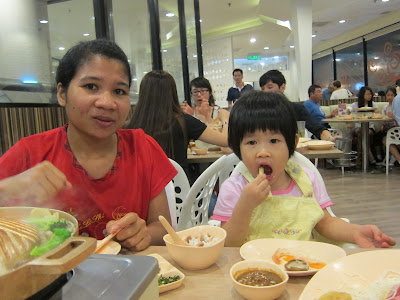 (NB: It is now 5.45am. Hubby has just taken Lina to the airport. I'm posting this now as I'm afraid I won't have time tomorrow... taking care of 2 kids without a maid!)

Visit to the dentist

Yes we went. Twice actually, the first to get into queue and the second after they called to say it was almost our turn.  Yes we waited half an hour even so. Yes we paid, RM25. Yes Jo Ern was called into the dentist's room. BUT, she wouldn't open her mouth AT ALL!! The dentist tried. She asked me to sit on the chair with Jo Ern on my lap, talked to her nicely, brought a mirror for her to look into, said we were only going to count her teeth. All the while JE was screaming (with jaw clenched hehe), arching her back and kicking violently.

I'd wanted a dentist to check the damage from her fall. Also if there is any infection. She still can't bite using her front teeth. I did prepare her a bit for the visit beforehand too, saying a doctor was going to check her teeth, check only. Sigghhh. What to do.

As for the gash on her chin, looks like it WILL be a scar. Sigh, this is like getting a scratch on a brand new car. Well, at two years old, Jo Ern IS a brand new human. I should be positive and focus on how wonderful it is to have this human in my life in the first place. But I am upset. :( 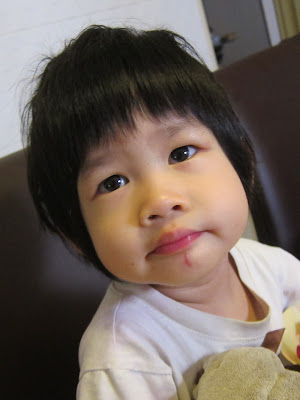 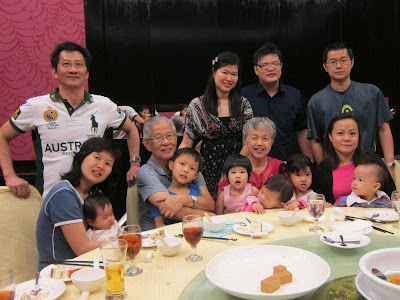 Everybody smile! OK, please just look at the camera

We wanted something a little grand for my father's 70th birthday. So we booked an 8-course dinner at Dynasty Dragon. We had a big table in a private room, which was nice.  We could all sit together for once and the kids could run around without us worrying where they were.

The food was a little different from standard wedding fare. The piglet combo-ed with a garlicky chicken, the Indon-style dancing fish had a Thai-style sauce, the prawns were deep-fried with shimeiji mushrooms. Overall it was pretty yummy.

Jo Ern had her bad fall before the dinner and little Jensen got fever after the dinner. But everyone enjoyed themselves AT the dinner! Happy birthday to Papa/Ah Kong!

And the grandkid tally is 6 this year with the addition of baby Su Ern. :)

NB: I was busy feeding Su Ern at photo time... my sister's blog has better pics.


Time for a post on little Su Ern. Poor lil kid keeps getting sidelined! Better post something on her first. Took her for her 3-month jab and Rotavirus last weekend.

While she looks chubby enough, weight-wise she's slightly below the average curve. Paedi said not to worry though. 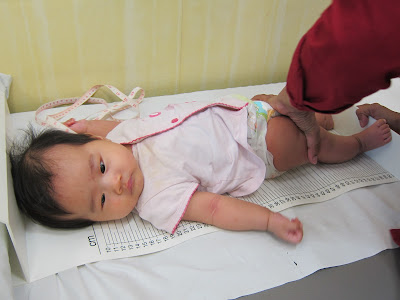 How long am I? Check me, check me. 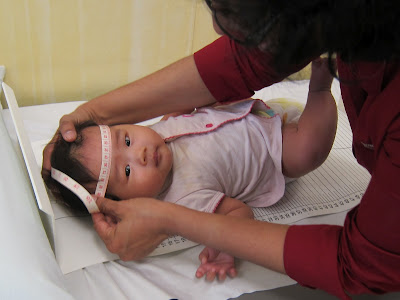 You call this a hat? I don't like it.

She smiles a lot now! If someone talks to her, she just smiles and smiles.

She still sleeps a lot. She usually wakes up, has milk, sleeps again immediately and repeats the whole day AND NIGHT. And therefore, she's rather easy to look after. She has grabbed the best-behaved grandkid award at Ah Mah and Ah Kong's place (award previously held by Jo Ern and later taken over by Erin).

This is nice, Mummy 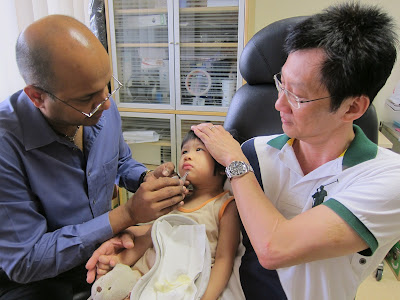 I shall be brave and let doctor see

JE had the follow-up visit with the specialist yesterday. I thought he was merely probing the scab with the tweezers, but he pulled it out (hmm why ah? Shouldn't it be left alone?). He said the wound is gaping a bit and that's why he'd recommended to put a stitch in it. Oh dear, my heart fell. If JE has a scar because of my choice not to have her put under GA, I'd be feeling bad for a long time. Then doc said it has filled up inside and healing in children is good, so it should be fine.

I'm hoping the doc is only trying to justify his initial recommendation and there will be no noticeable scar. :(

JE was a trooper, sat without protest. Lifted her chin when told to also. But she cried for a while after he pulled out the scab.

The wound doesn't look too great at the moment. I wouldn't have given it much thought if it'd been anywhere else. But on the face...

Next step is to take JE to a dentist. Will have to wait for her mouth ulcers to heal first.

That's Jo Ern's account to our maid of her ordeal. When prompted for what happened next, she clammed up. Another day, when asked again, she continued with 2 more sentences.

Guess she cannot describe what happened in between. 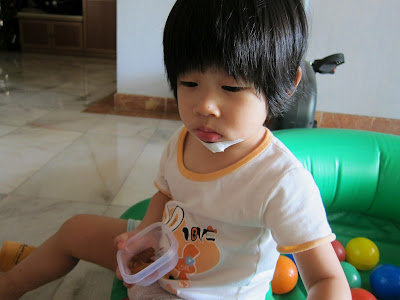 I ache for the pain my child is going through. She keeps pointing to her now-crooked bottom row of teeth, turning to me and saying 'teeth'. Her bottom lip is sometimes swollen. The inside is angry red in some parts. Her mouth hangs open slightly and saliva drips out occasionally. She can't suck her two fingers because that hurts and therefore she has some trouble sleeping. I have been telling her, tomorrow will be better and then better, then no more pain. Then what happens, TWO mouth ulcers appeared. Sigh. First time in her life encountering an ulcer and she has to deal with two, BIG painful ones.

Arggh all this from a simple fall!!

She's not eating well, naturally. She happily grabs her favourite foods, only to realise her teeth hurts when she bites or puts bite-sized food in her mouth only to realise the ulcers hurt.

(Must stay positive... it could have been worse) After the first day, she was chattering away and playing like normal. She offers her chin up for dressing changes. She takes the prescribed spray without protest. She actually likes the prescribed Ibuprofen and sometimes says 'Pain-pain'.  Then, when I am feeling the ache... 'Mah (must) take med-chen'. Hehehe. Well, better than having to MAKE her take it! 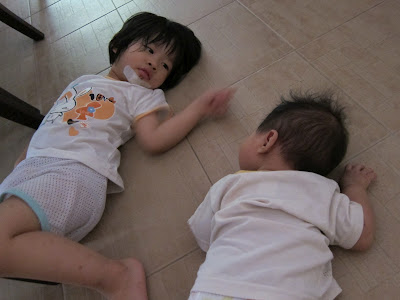 Hubby was playing with Jo Ern this morning and she was running around shrieking with laughter. Toddlers are hardly the most stable of creatures. Suddenly she tripped and hit the sharp corner of the kitchen drawer handle, HARD. I saw a gash on her chin before the blood welled up. Hubby carried her and realised her bottom teeth were broken too.  Oh my... my heart broke.  There was blood everywhere. Inside, her mouth was full of blood and outside, blood was streaming out from the chin.

Hubby took her to the paedi where the nurse tried to turn them away as they don't treat accident cases.  Hubby insisted (luckily he can be forceful).  The paedi gave JE a painkiller jab and a referral letter for the Tropicana medical centre. In all fairness, she didn't charge anything.

Service at the medical centre was soooo slow.  An MO examined her and sent her for X-rays. Waited some time for her turn. The kid was scared and cried when hubby put her down on the gurney for the X-ray. Stretched her arms out asking for 'pao-pao!' (carry). Repeat for taking X-rays from the side. Then wait some more for the X-rays to be printed. The MO checked and called the oral/facial specialist. Wait again.

The blood was mostly clotting now and I was relieved to see only one tooth looked bad. X-rays showed no fractures.

Specialist recommended to put JE under general anaesthetic. He said for the chin, outwardly you see only a gash but inside, the muscles tear and pull apart. Under G.A. he will stitch up the inside, glue the outside and try to push the tooth back. He could schedule it for 3pm and she would be done by 5.30pm. But to me, G.A. seemed extreme for such a young child, and the injury didn't seem THAT bad. I asked about the cost. (Maybe at this juncture he thought, these people have no money!) He said he would check. He probed the gash. I asked how it was, he didn't answer. Eventually he asked the nurse to bring the glue. Applied that, then applied a plaster. JE was fine with all this. Then he pushed the tooth and held it a while - JE wailed but didn't disrupt the procedure since her mouth remained open. He then said ok, everything's done and also said "And I apologise for just now".  Err but what was he apologising for?? For an unwarranted recommendation? Maybe he expected JE to struggle and fight and turned out she didn't?

The bill wasn't cheap at RM485 but of course G.A. would have cost more. And we got to go home instead of having to wait for 5.30pm for everything to be over. 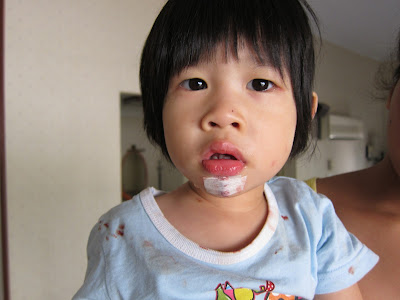 Poor baby. Her bottom teeth are out of place. That's blood all over her shirt.

I'm keeping my fingers crossed that:
1. There would be no scar on her chin
2. The teeth situation would be ok. Can't confirm if only one tooth is affected since there's still blood in there.

Helping in the garden

Hubby went into a frenzy of plant-trimming last weekend... 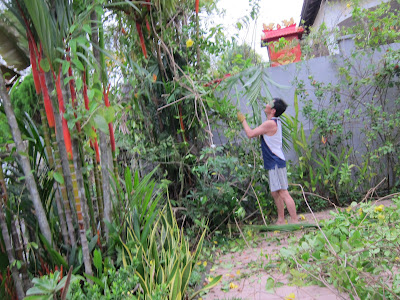 Which prompted the 2yo to have a very busy afternoon as well! 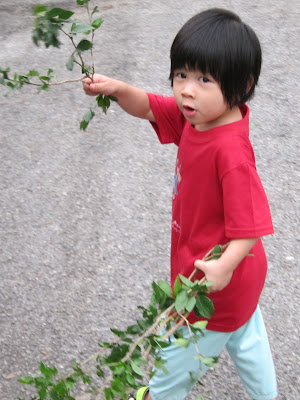 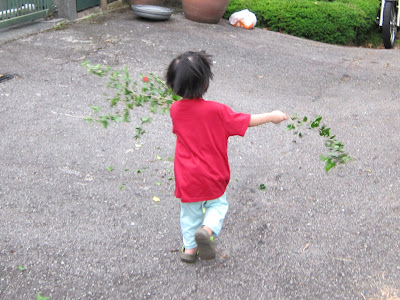 But she did keep complaining that her hands were 'a bit dirty'. 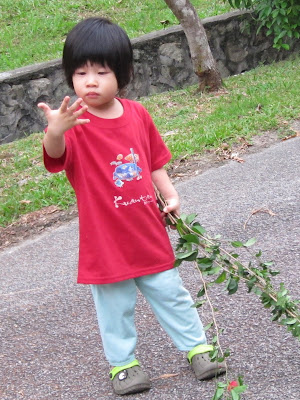 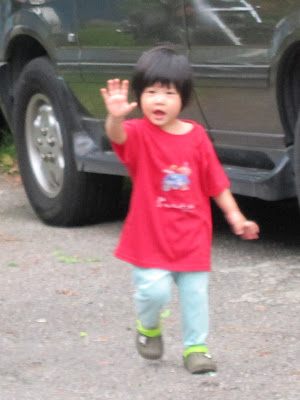 I love giving Jo Ern something she likes. This morning when she came down for breakfast, I was holding a fruit pick heading towards the grapes that I'd just halved for her. She looked at the pick for a second, threw her doggie onto the floor and ran for the dining table exclaiming 'Jo Ern got WHAT??'.  Then the smile when she saw the grapes in her bowl.

A moment of joy for her. And for me. 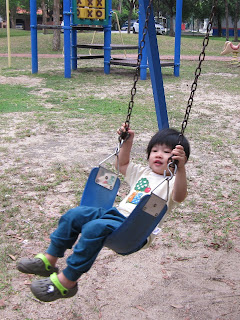 And my mission is to create many such moments of joy, which add up to be her memory of a wonderful childhood.