Time for a post about this special chapter of my life that is ending soon. I breastfed JE exclusively for 16 months and SE for 12 months so far

I go off to work every morning with my "milk bag", which was a full moon gift (glad SIL chose black and not  some bright colour!) This bag often gets mistaken for a camera bag... not that I ever explain to people its true function. :) 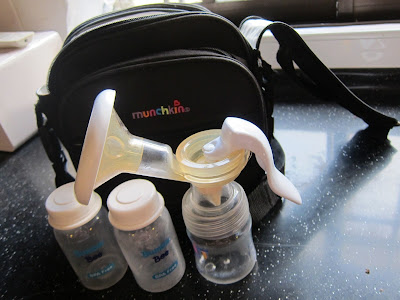 
Twice a day at work, I drop everything and march to the toilet to express milk. I count myself lucky since my line of work doesn't normally allow people to disappear like that.  With JE, my first 6-mth assignment was with a client headquartered in Singapore where I could disappear at will around the weekly con-call. My second 6-mth assignment was on the helpdesk with an understanding client. Add a few months in my company before it collapsed and that made up the 16 months for JE. I was then on a project while pregnant with SE... this was 'normal' in the sense that I couldn't have done disappearing acts. After SE's birth, I sat around in the office for a month. Then on to an 3-mth assignment just helping out. I was about 30% occupied and easily found time. Next 6-mth assignment was good too - someone else was the lead so I happily took myself off as necessary. Perfect so far!

How long more? That depends on whether supply keeps up (it is dropping), on whether work assignments permit and assuming the previous two factors hold up, on how hard-working I am. Having to pump milk is so tedious and time-consuming. On the other hand, gotta start watching calories again once I stop! I've been on a 3-year buffet knowing that I can't get fat while breastfeeding. :)

My mother made me this feeding blanket... and that's little SE's hand trying to push it aside. Aikks. 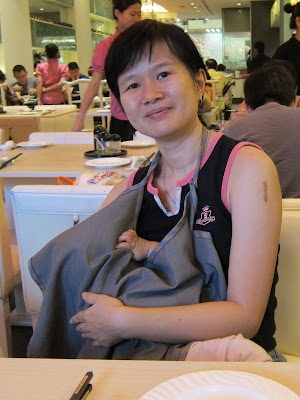 Cannot see anything! Take this thing off my head!
Posted by Stacy at 1:52 AM 1 comment: 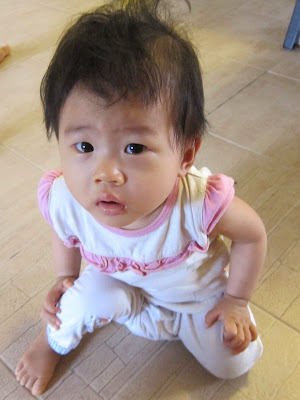 SE wants to be carried ALL the time. Now that she can crawl, she will follow me around while I move around the house, demanding to be carried. This little one is PERSISTENT and LOUD.  I made a cake recently and she crawled along on the floor after me while I put ingredients into the mixer, went to the sink to wash things, walked to the oven to preheat, back to the mixer to pour the mixture out etc... until I finally finished and could attend to her. All the while crying loudly and stopping regularly to bounce on her backside, which is her signal that she wants to be carried. Who wants a little follower like this??

I get so irritated by the screaming that I purposely ignore her, but eventually I realise... the poor kid just wants love and attention. When I do pao-pao(carry) her, she is adorably cuddly.  Awww.  Hoping to have more time and patience once I have a maid again. 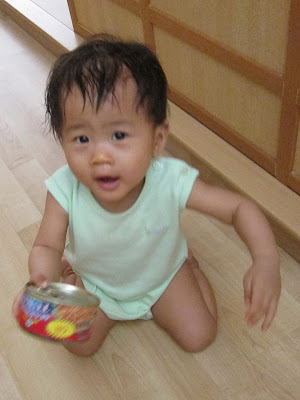 I am holding something spe-ciiiallll 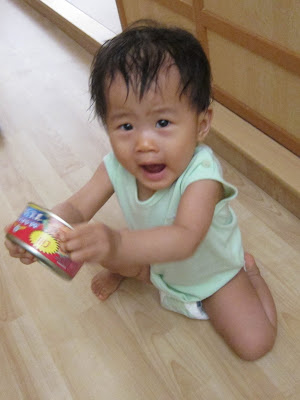 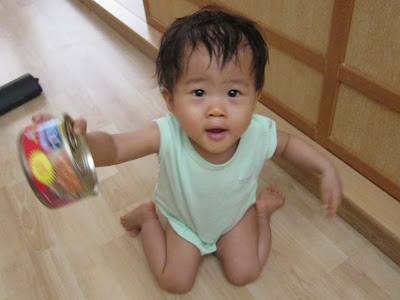 Here, you can have it if you pao-pao me

Jo Ern tops my priority list and what does she tell me?  'I love Papa only'!  I know why actually. Mummy is the one who tells her to finish her meals, stop crying, do something else and not keep playing iPad, pick up her toys, put her clothes in the laundry basket. And things like cry cannot get anything, today I will hide the iPad because I kept calling you and you still keep playing the iPad.  Papa? He gives her what she wants just so she will stop bugging him and he can get back to his TV program/Internet surfing. He is all too happy with her spending hours on the iPad since that means he is free for his own stuff. When she cries, he gives in so that the noise will stop. He snacks instead of eating proper meals and readily shares the food with her. She probably thinks life with Papa will be paradise!

Sigh. So I had remind her what I have been doing for her, what I bought for her and all because I love her. And how Su Ern is happy to see her because she loves her jie-jie.

And eventually after the psycho-ing, she 'agreed' to love Mummy and Su Ern too.

Kids. *roll eyes*  I now plan to highlight every so often what I'm doing for her and that it's because I love her. In case she takes my actions, and me, for granted. 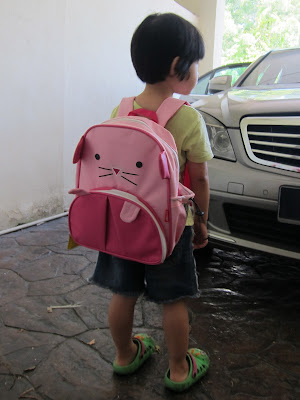 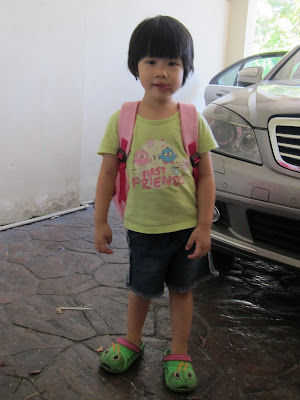 I love my mouse bag. And my mummy too

I should stop writing about Genting trips at some point, since we do keep going there. Maybe continue a while just to keep track. So we were there again for 2 nights last weekend, and we had a suite again. *happy*.  Hubby votes to keep future trips to 1 night though. Getting enough sleep with JE and SE in the same bed is tough! JE as usual moves all around and SE never sleeps the whole night through. But I vote that 2 nights is fine especially now we have free good food.  Hehe... a bit 'paiseh'/shy showing up there meal after meal though! Still, might as well make use of this privilege while it's there!

SE had a blast trying out new foods. Now that she is over 1-yo, lots of food options opened up. For the very first time in her life, she had brie cheese, cheddar, strawberries, physalis/cape gooseberries, bread-stick, commercial yogurt and various bites from the buffet. 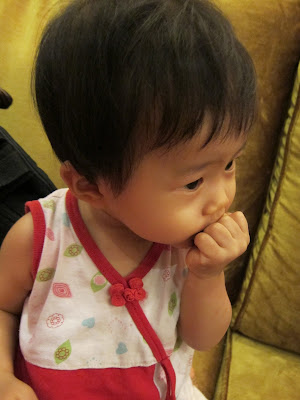 She got hold of tissue too.  This girl loves tearing tissue up and putting some in her mouth. Then I have to hunt and dig it out while she protests loudly. 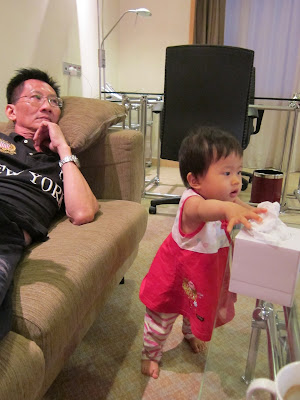 JE had a blast also. But I realised she's past the height for free admission to the theme park now. Oh well, having kids is expensive. 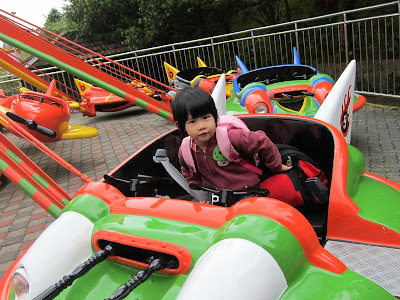 Spaceship of mine, blast off!

Good thing SE still can get in free. 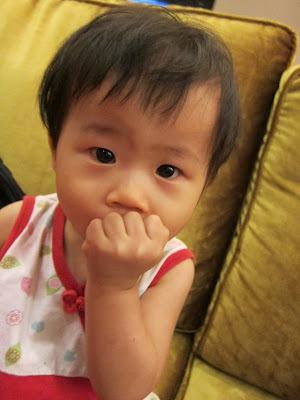 Little Su Ern is one year old today! A year ago, I was feeling rather hesitant about this new baby, wondering how to fit her into our already-full lives. Now that seems far away... she has fitted herself in well and snugly.  She's cute, she's active, she's demanding, she's loud and I can't imagine life without her. 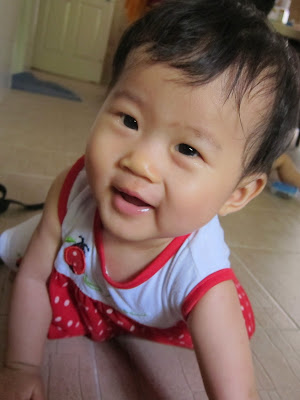 I am a big girl already!


We had her birthday dinner last weekend, at a restaurant near our house. Food was good, mango gateau birthday cake was so-so. No blips with being late or missing candles this time. :) 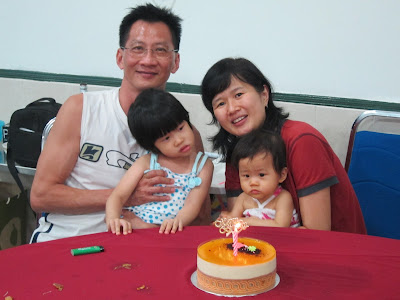 Am I getting some of my cake?
Mummy: Nope. No need to eat sugar yet 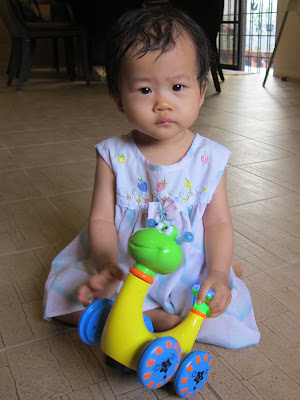 Fine, no cake nvm. I play with my birthday snail from Ah Mah/Ah Kong
(Mummy: Hehe greedy guts not too happy) 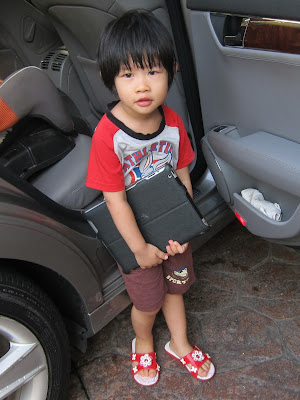 Hello, my name is Jo Ern. I am NOT an iPad addict 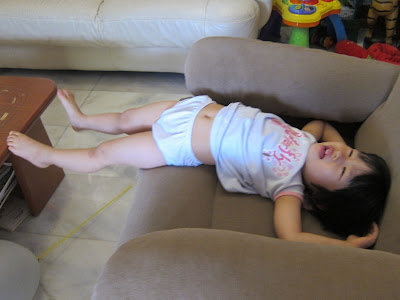 Sigh, what to do with my little addict? She wakes up in the morning, suddenly smiles and asks to go downstairs. Where she makes a beeline for the iPad. Actually the smile happens right when she remembers the thing. You want to feed her breakfast? Need to pry her off the iPad first. Same for other meals or if you want to make her shower, go out, take a nap, everything. She throws a small tantrum before she gets to whatever you want her to do. Then after that activity or sometimes only halfway through, she runs off to the iPad again. She's on that gadget morning, afternoon, night.

Hubby says leave her be and she'll tire of it eventually. I guess there's nothing pressing for a 3yo anyway even though I'd rather she do almost anything else.

Feeding Su Ern is a breeze! She finishes her milk and baby food every day and happily accepts extras like avocado, banana, pieces of sweet potato, fish. Really, if I weren't so busy trying to get JE to eat more, I could stuff little SE.

The small one in action while the big one stands by... 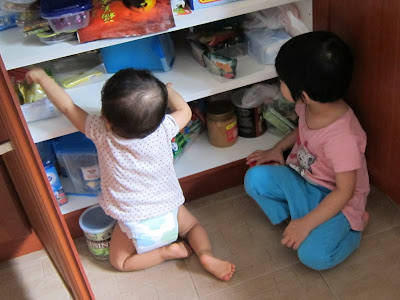 
Oh jie-jie is busy? Nvm the small one can conduct raids by herself... 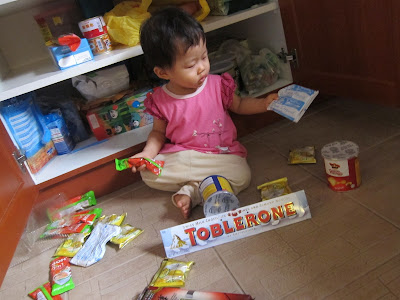 Shall we open this first or this? 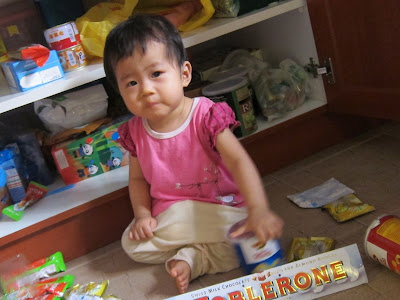 What are you looking at? I'm a growing baby, you know!

SE hasn't been to the paedi for some time. Our electronic scales are out of order too. Plus I've been busy lately without a maid. Due to these reasons/excuses, I don't know where SE stands on the growth chart. Definitely need to check when we take her for vaccinations at 1yo. If she's underweight, at least she'd be relatively easy to fatten up! (Excuse my paranoia but I do have a very hard-to-feed first kid...)
Posted by Stacy at 11:41 PM 3 comments: