I started this new assignment almost a month ago. From the pre-sales stage I have been trying to get OUT of this. A worksite that involves 3 hours of daily driving, a client  demanding enough to say their people can work throughout CNY and expect similar commitment from us, pre-sales requirements that were super-detailed, bosses who were workaholics... I could do without this kind of pressure! But a big team was called for and I couldn't extricate myself.

So it started. From the beginning, it was nose to the grind. Workshops after discussions after meetings from morning till late. And at the end of the long day, bosses who asked how come documentation still wasn't done. Work delegated to other teams (phew) who were supposed to come back to us? After a day, bosses would ask how come this item wasn't moving. And on being told that we were waiting for others, would insist we need to be more pushy and make it our responsibility to get results. Have a moment of breathing space and checking the net? Boss would come and comment, oh so free ah? Argh I have been getting cushy assignments for quite some time and am not used to this kind of hounding!

This week though, I had one good moment. I was stressed preparing for this workshop (I'm not the kind who likes being at the centre of attention and still dread it). The time came and to my surprise, the session went great. I was totally in the zone: completely in control, handling challenges with panache, snatching the right words out of the air. Walked out afterwards feeling triumphant with confidence oozing at every step. Drove home just a little fast with the radio on just a little loud. What a rush. Phooh!

The next day I had a similar workshop and couldn't repeat the performance. Had to fumble a bit for words. Hehehe. Oh well, I still get to go home to my two little girls! 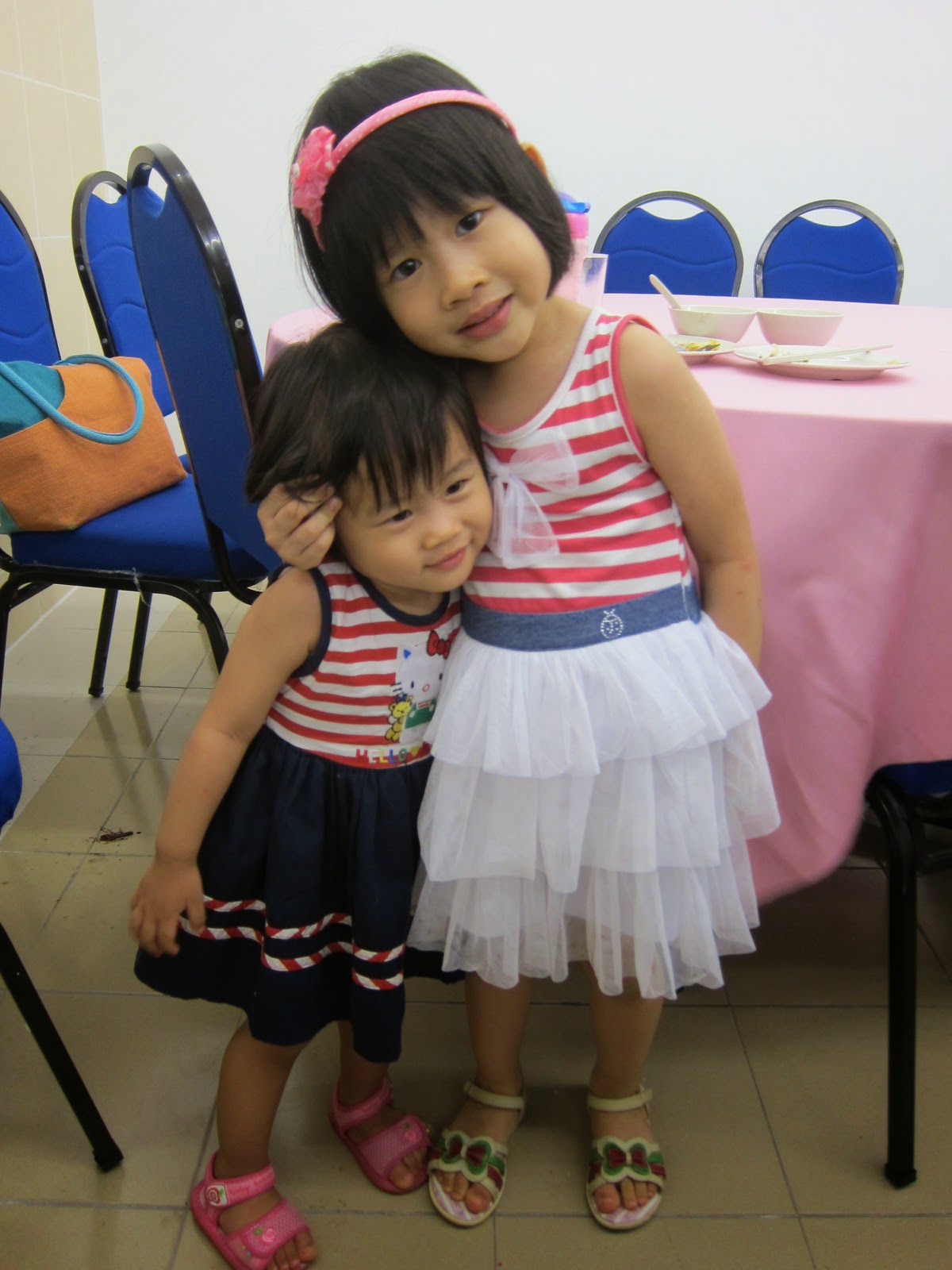 Mummy! Look, pretty or not?

Continuing with the program to make JE eat faster.  Reward chart this time has TWENTY stars! She has improved and is less prone to keeping food for ages in her cheek.  But she will still lapse into doing that if not prompted. Oh well, Rome wasn't built in a day.

She got her twenty stars and now she knows the drill.  First, pose for a mug shot with the chart... 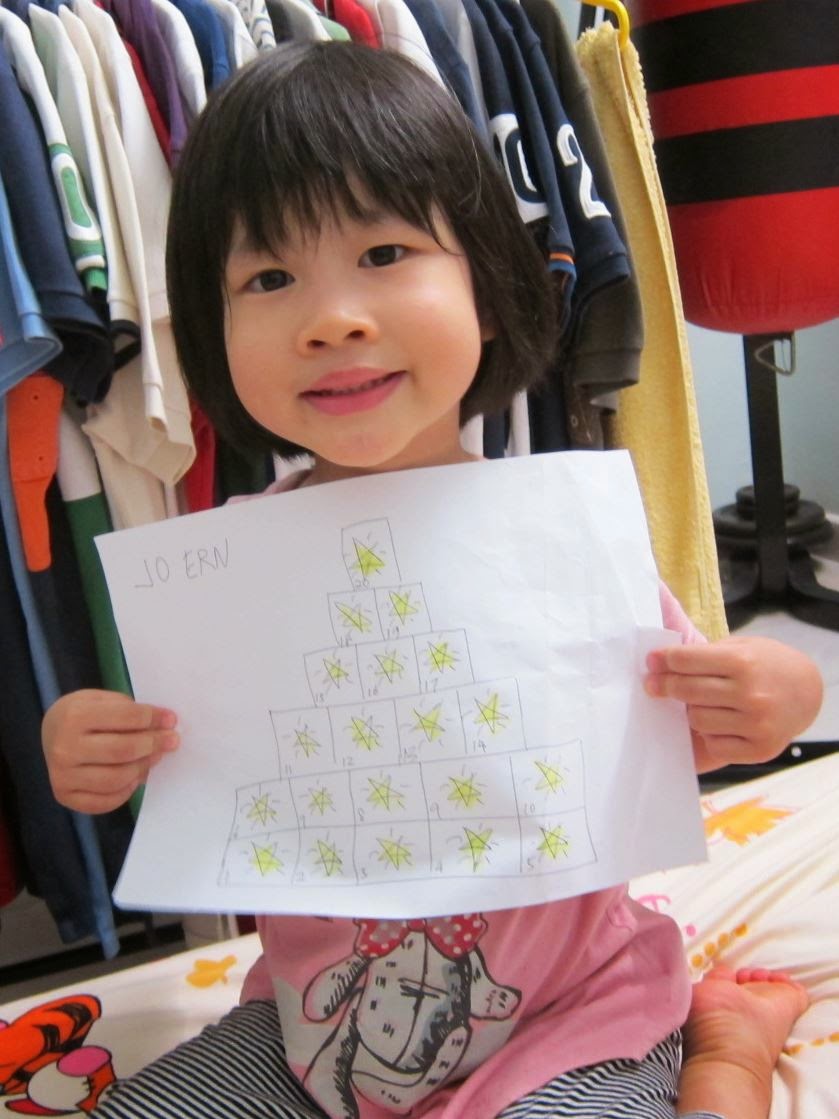 Me and my stars

Then for the good part, choosing a toy!  This time she selected the magnetic paper dolls. 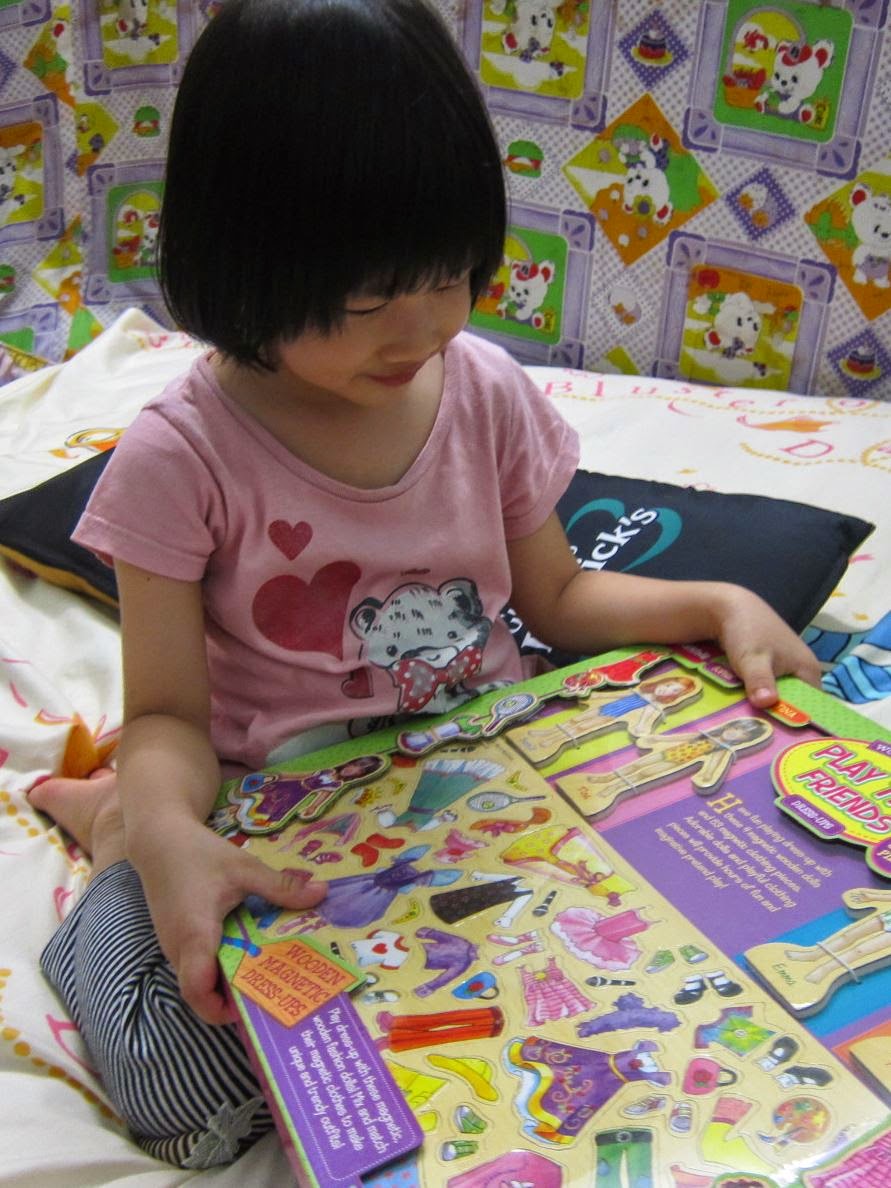 She got almost all the stars only with someone putting food in her spoon, bringing the spoon to her mouth and prompting her to EAT. For the next step, will be giving her less help.

Lil SE sometimes fights with the maid. Luckily the kakak is a patient person and will laughingly accommodate her.

Gnngngggnn this girl. As if she can feed herself, change her own diapers and wash her little bottom by herself. 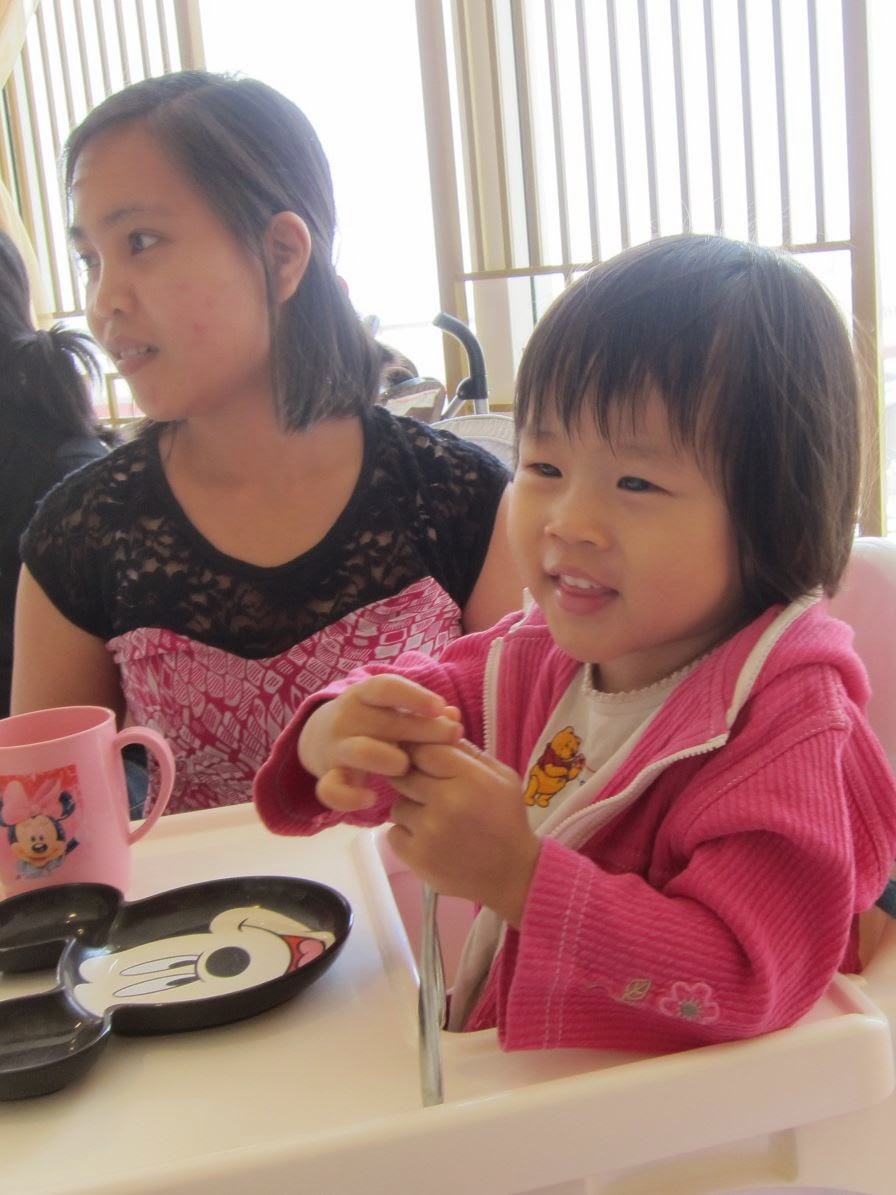 No, I no need ta-tak

This event skipped one year... coz in 2013 Ah Kong wasn't feeling well and kept postponing the birthday celebration. Until Ah Kong insisted that we skip it altogether since his birthday was over already.

Good thing is, this year Ah Kong was fine and we had the celebration! It was Chinese food at Di Wei at Empire Subang.  Food was decent (took a pic of the first dish, Peking duck, and subsequently didn't bother).  The place wasn't crowded and there was a sitting area for the kids to play around in safely without disturbing other people. So... pass. :) 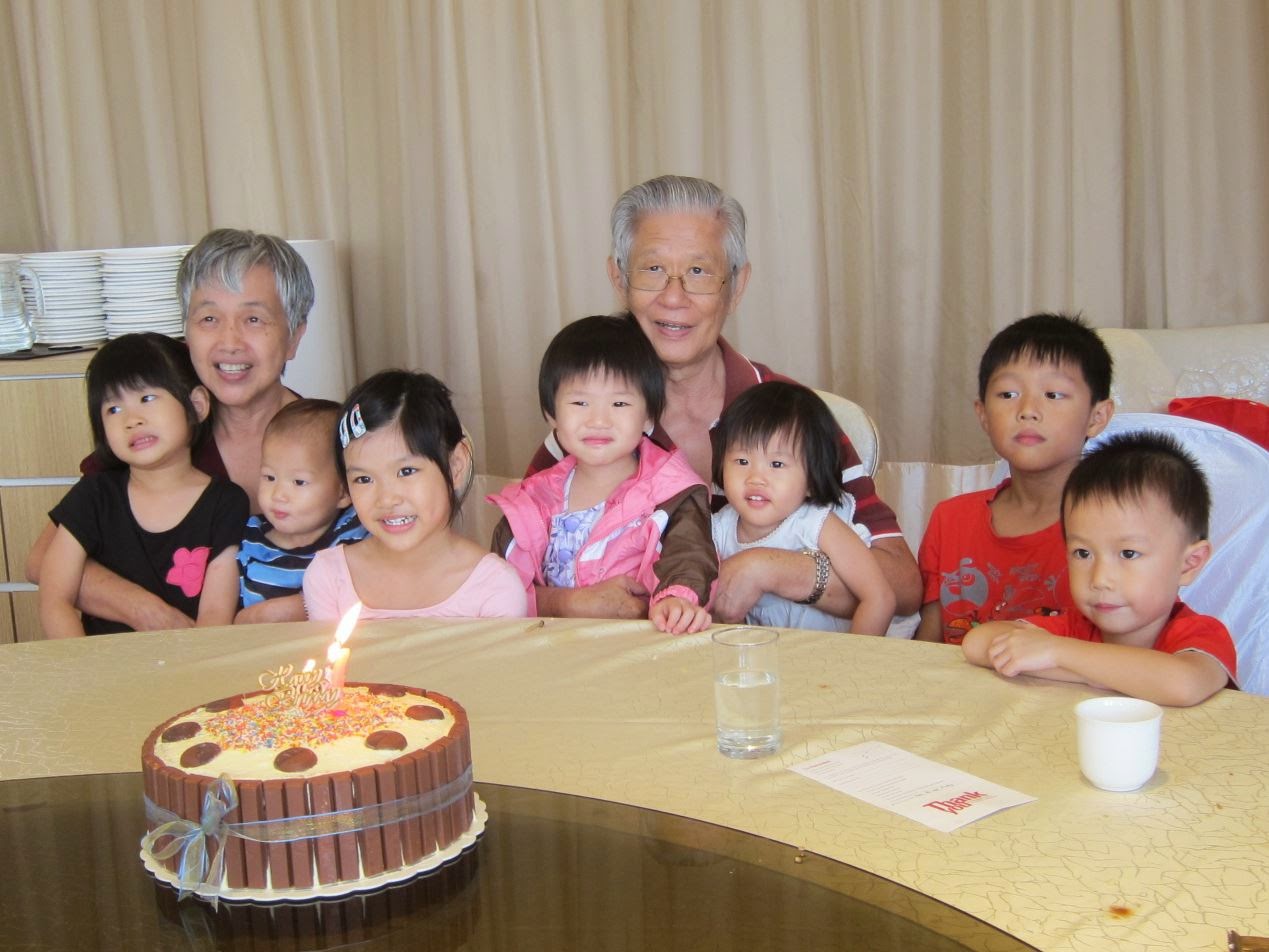 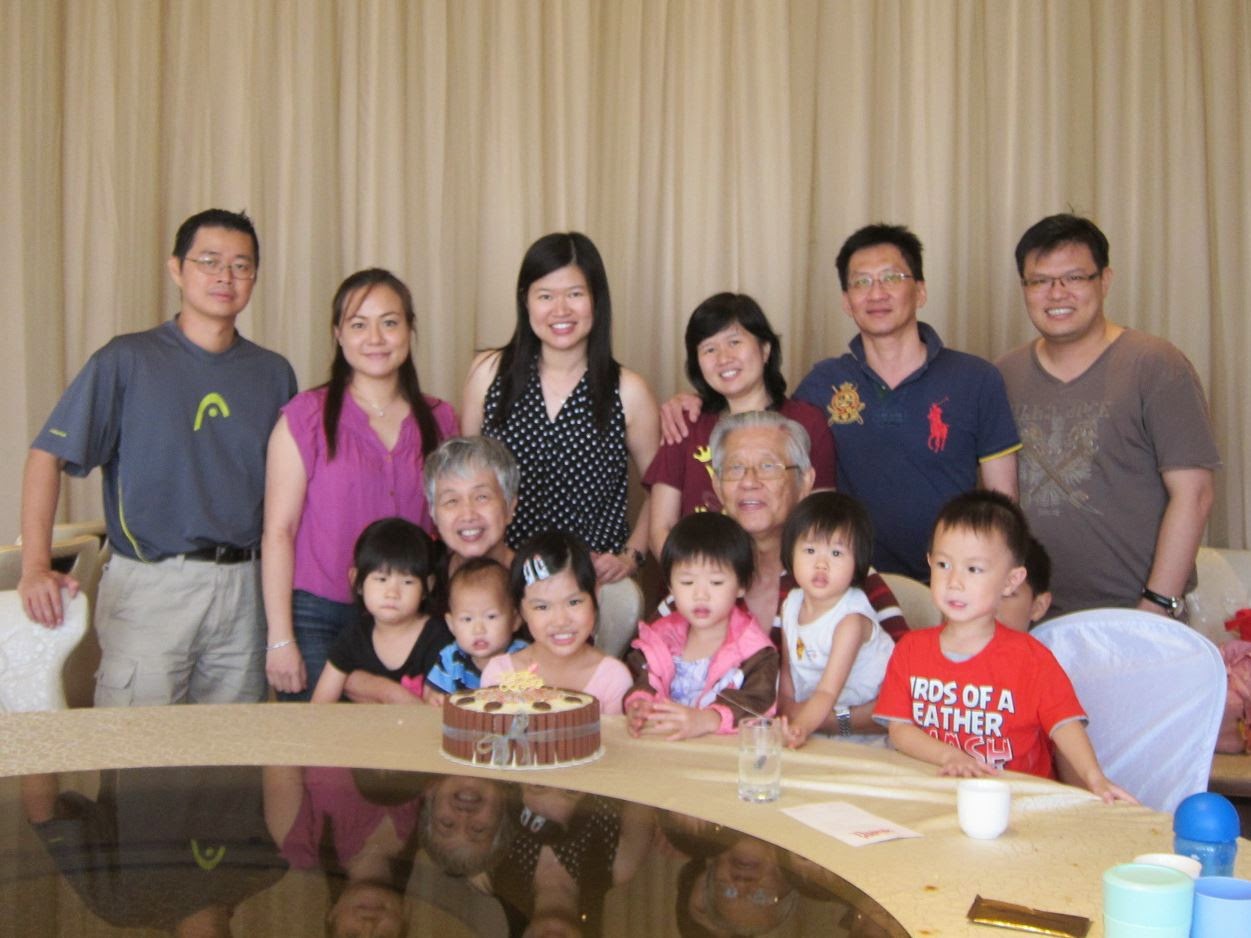 (I'm convinced my sis is standing a step in front of me. I'm not THAT short... anyway next time I'm not standing beside her)

Happy birthday to my dear father!
Posted by Stacy at 2:31 AM 5 comments:

If you ask SE who her best friend is, her answer is always 'Jo Jo!'.  I do hope they will always be the best of friends, to be there for each other. 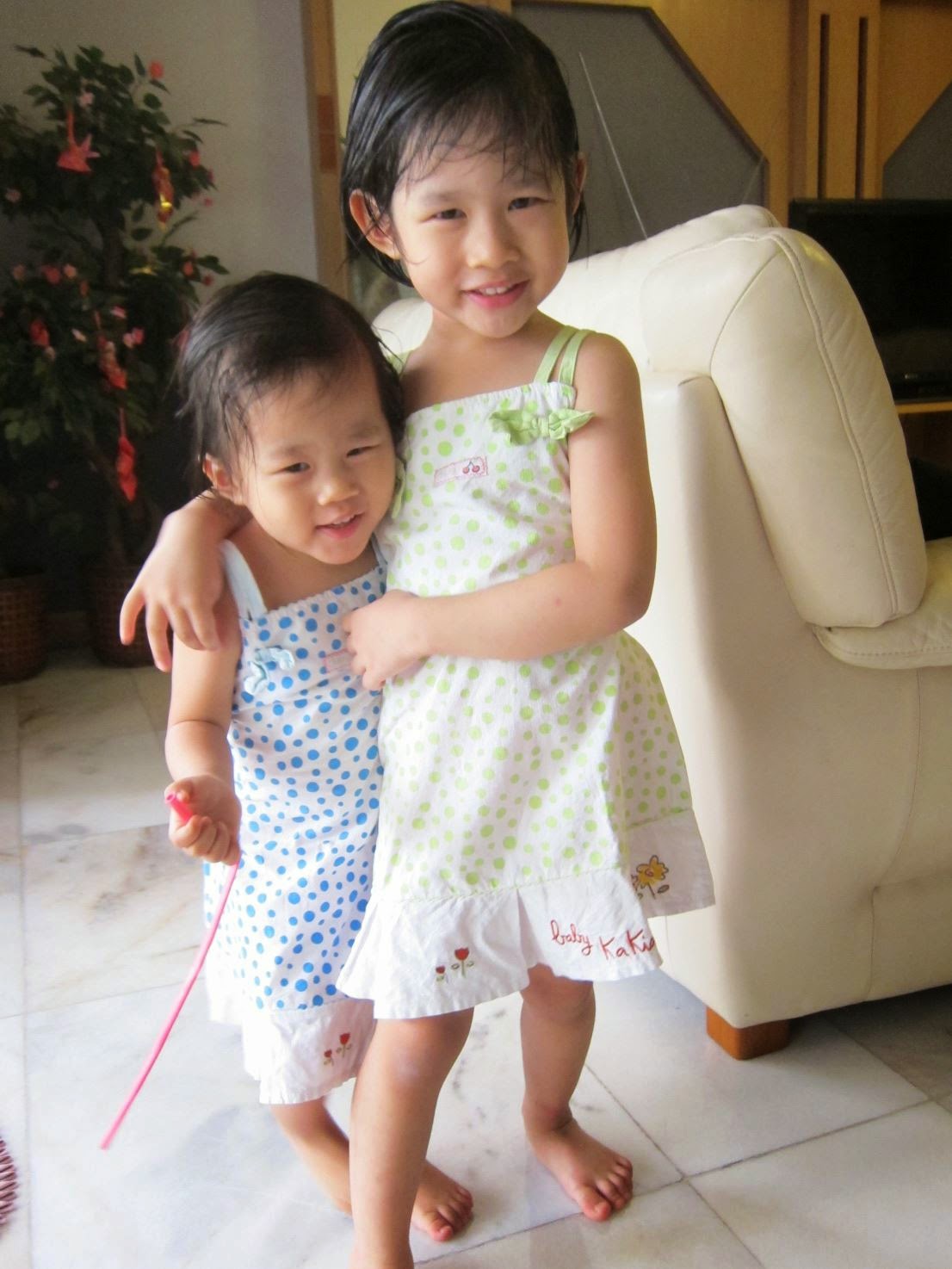 Err if you ask JE, her answer is 'Jie Jie', which would refer to my niece Elyssa. Guess an older girl is more interesting than a pesky little sis! But JE has become quite caring to SE recently after a stage where she wasn't bothered about her much. So ok, good enough for me, glad that I have TWO girls instead of one!
Posted by Stacy at 8:41 PM 5 comments:

This one is showing her true colours... or it's just the terrible twos (hopefully).  She wants what other kids are holding, and bawls when she doesn't get it.  She insists on putting a toy right where someone is already sitting, and bawls when that person doesn't let her.  She needs to spear her own fruit, and bawls when someone does it for her. She has to have everything done her way, EXACTLY her way. And bawls when the teeniest detail isn't right.

With me, she does get her way a little more than JE.  Because she is LOUD and my eardrums/patience can't take it.  So I give in. Of course, in a short while she'd find the next thing she is unhappy about and the cycle begins. Aiyo.

(SE is a dragon in the Chinese zodiac) 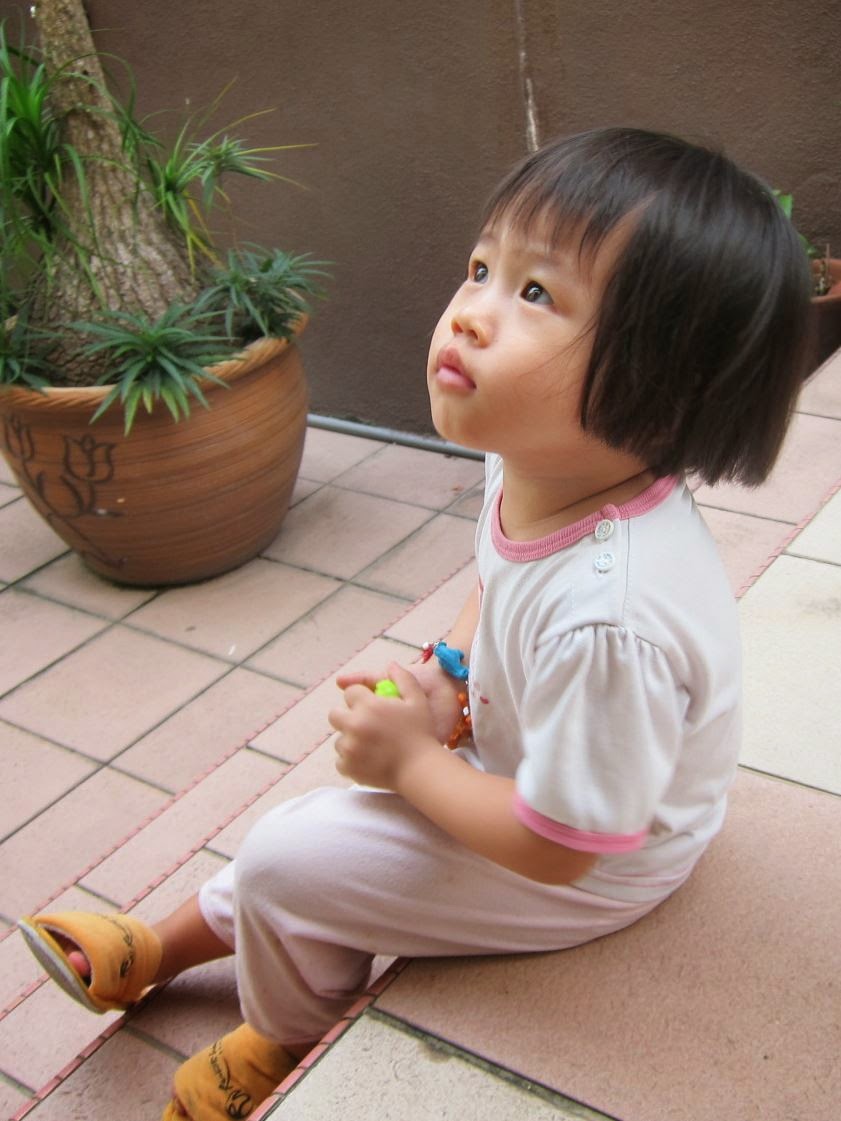 Thought I'd post what she chose as her first reward. 'Firsts' are important, no? :)

I didn't want to overwhelm her with choices. Put before her a dress-up, a cooking and a doctor set. She picked the doctor set immediately, and was firm when I kept asking whether she was sure.  (Though later she said she also liked the dress up set.... AND also the cooking set hehe). So doctor set it was! 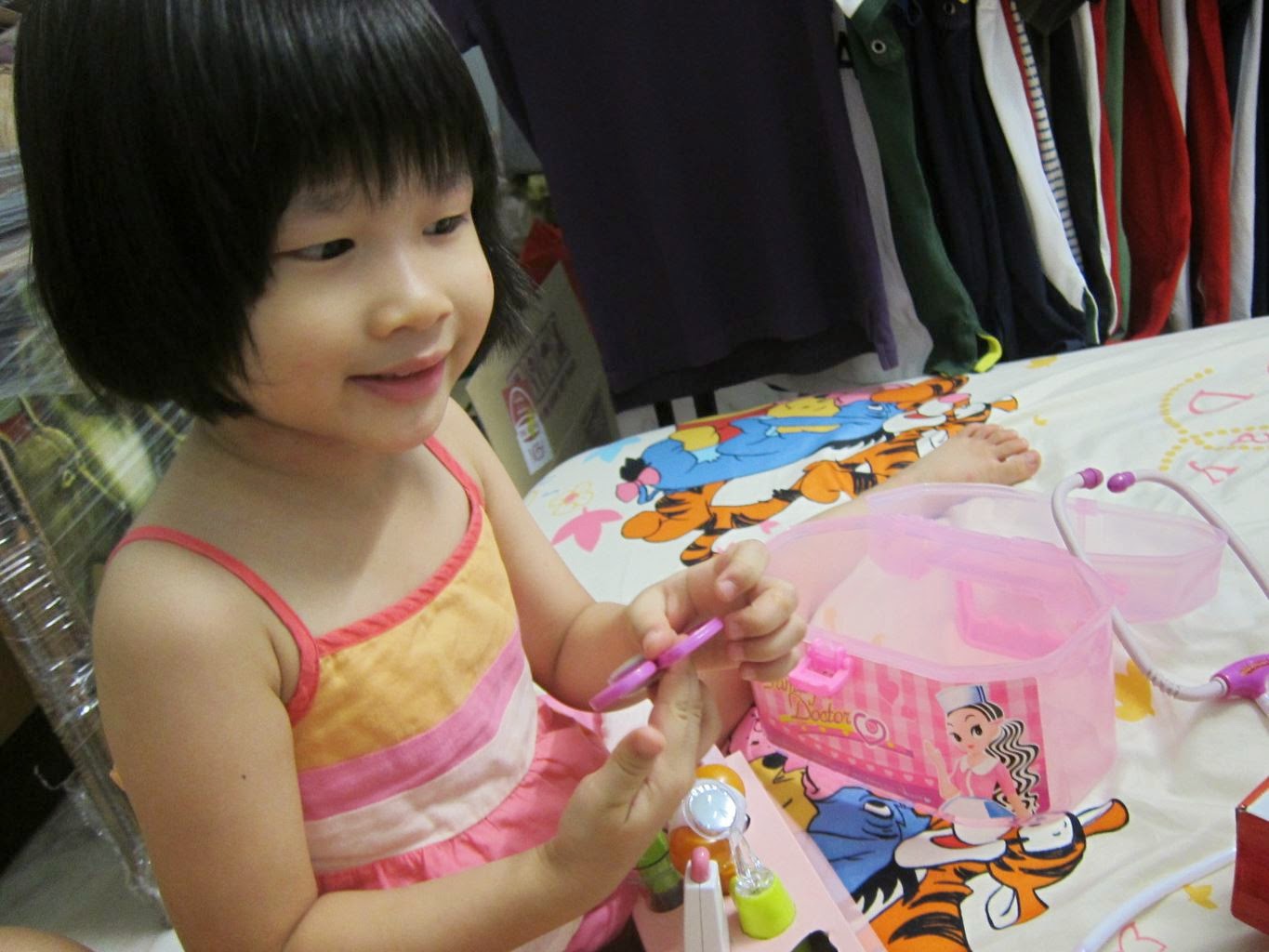 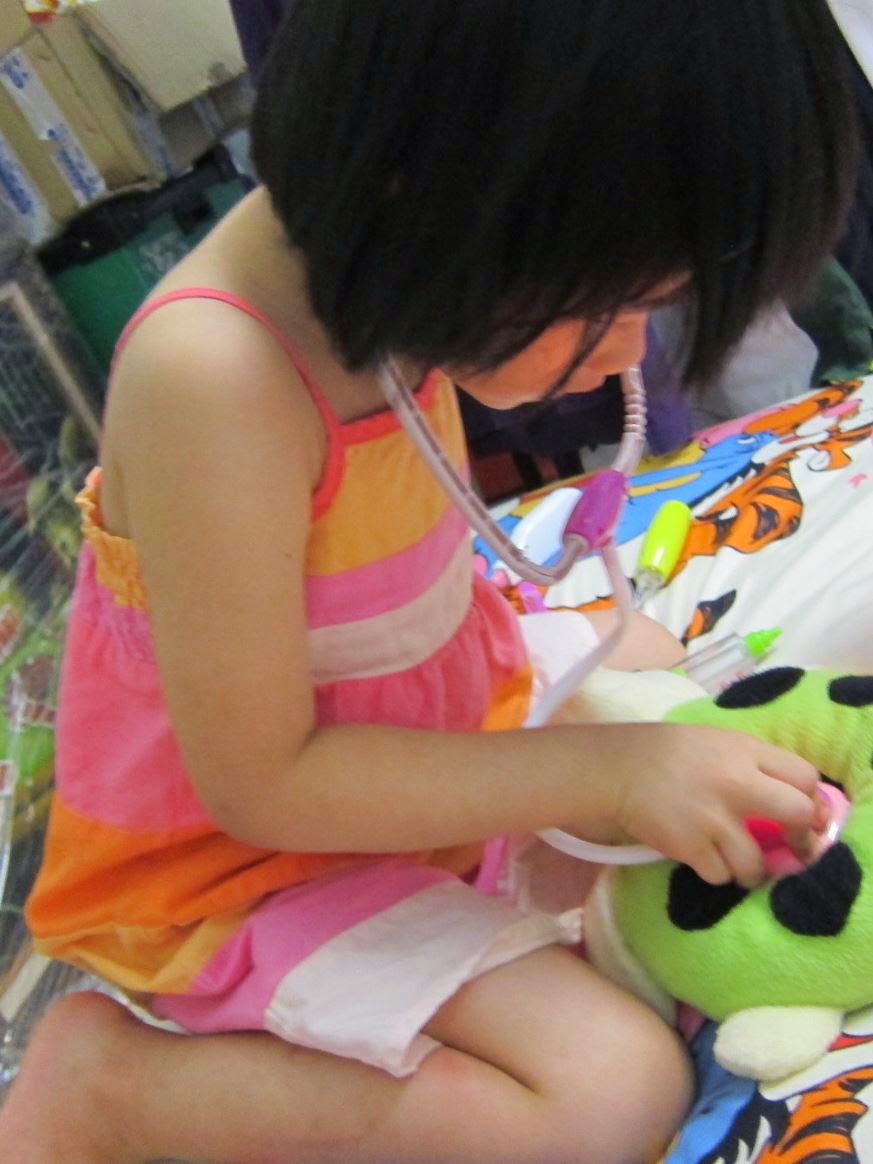 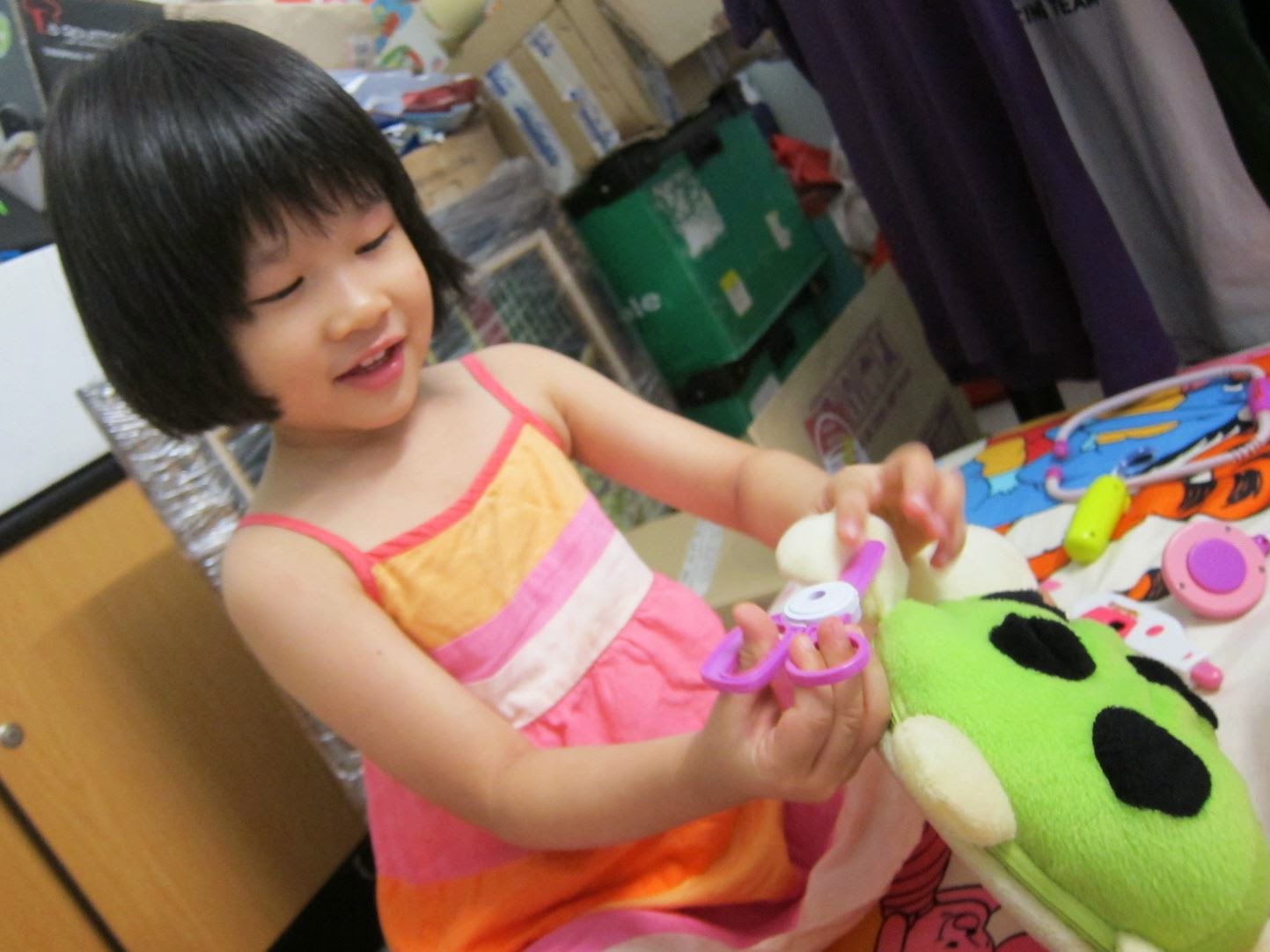 Oo I think have to amputate your flipper heheheeee

Hopefully she'll be motivated to get the next toy!

First reward chart is for... eating faster!  JE is overall well-behaved. But from babyhood she has been a very slow eater. Food can stay in her cheek for ages, be chewed a dozen times and still not be swallowed.  At mealtimes she talks, she wriggles, she plays and easily takes an hour to finish. So the goal for her was, finish her meal in half an hour (sometimes rounded up) and she gets a star.  Ten stars and she gets a toy. Well... I'd bought the toys for her already anyway, might as well make her work for it!

She made it only once out of every 3 or 4 attempts.  I occasionally relaxed the timing a little when she failed too many times in a row (must keep her motivated) and when she appeared to be trying so valiantly - gulping soup/water to wash the food down. Didn't want her to lose the joy in eating either. 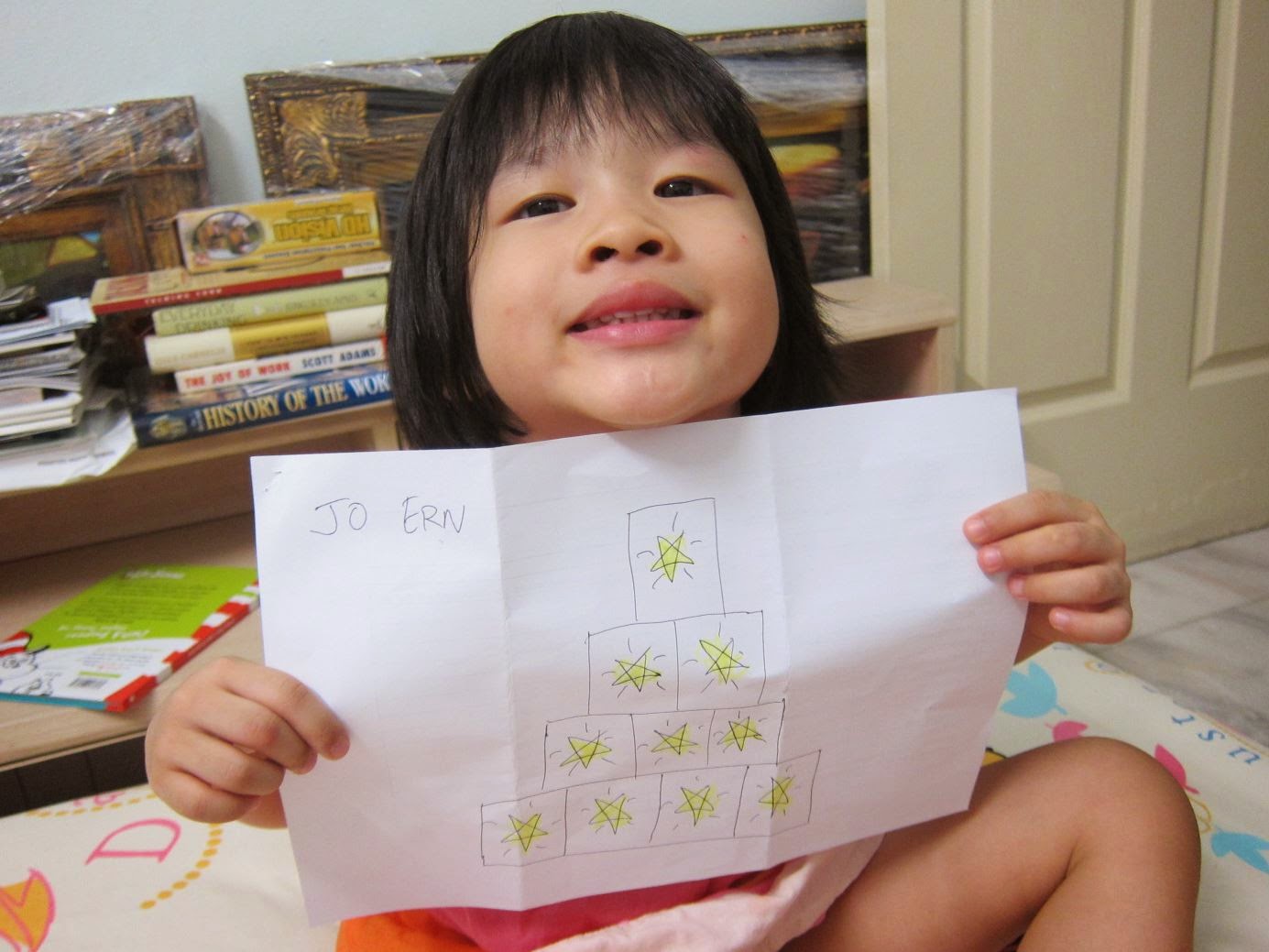 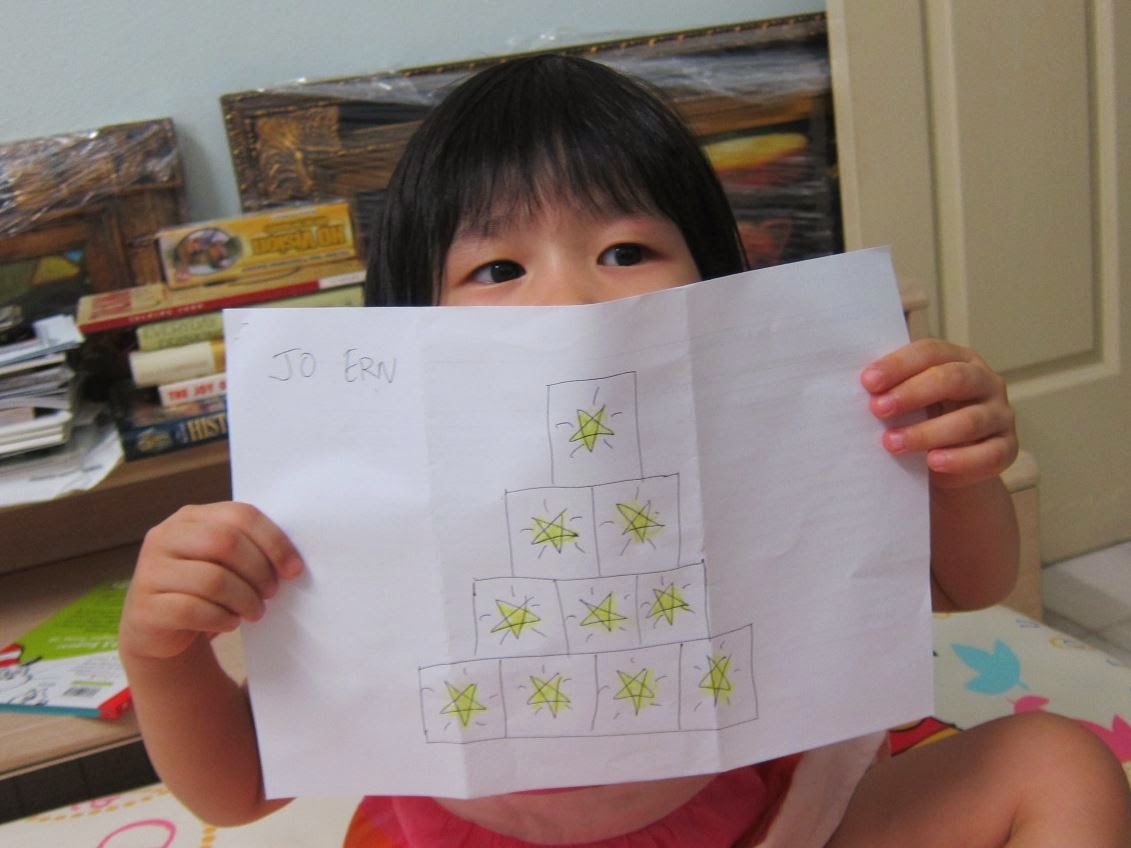 Phew... it wasn't easy!  Someone had to watch her, put food in her spoon and/or feed her or she'd get completely distracted from eating.  My parents helped with almost half the stars. 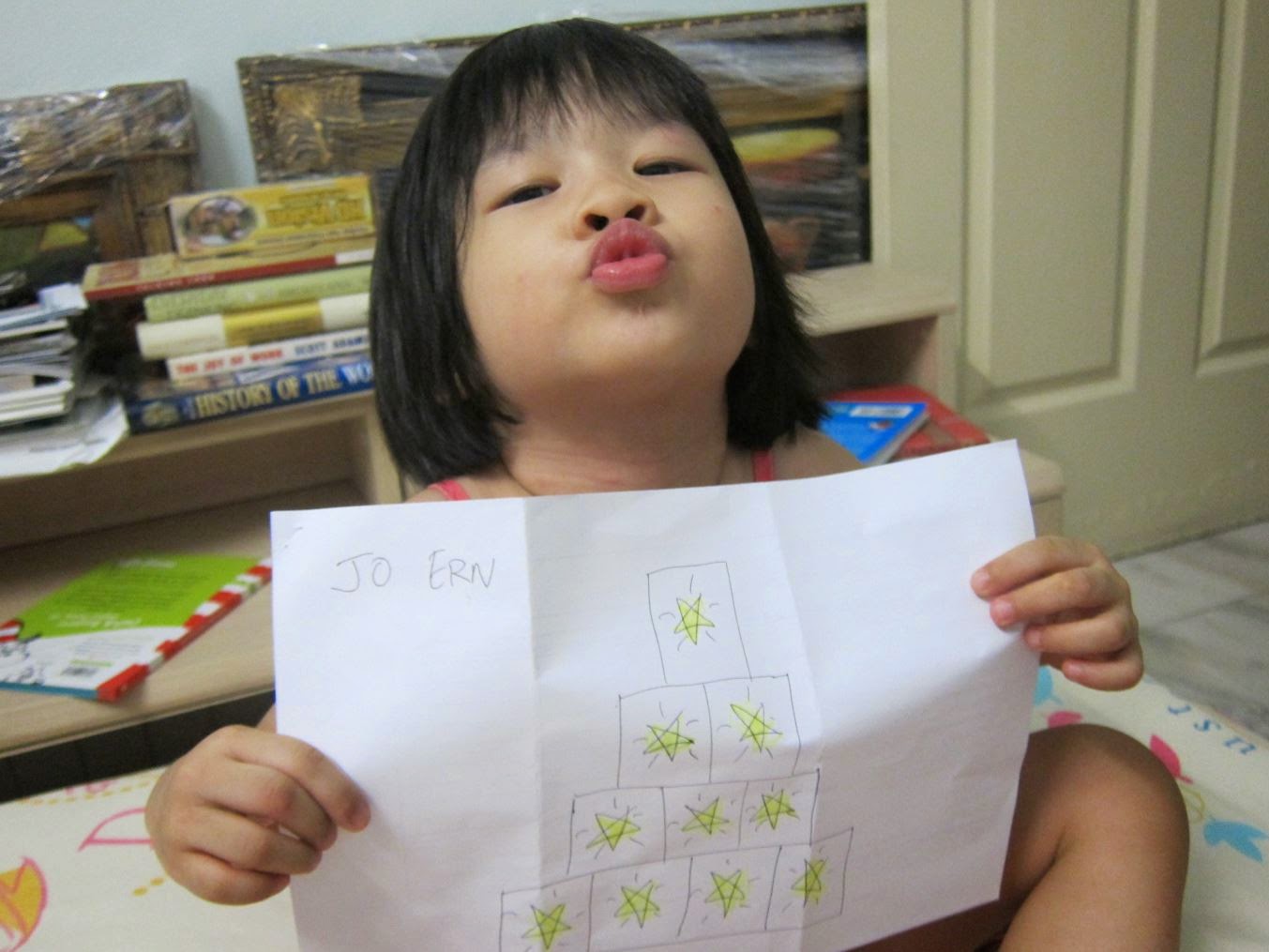 Thank you to Ah Mah, Ah Kong and all my fans... err helpers