We've been getting this pushcar when we go to 1U. It's only RM1 for the first 3 hours, though it goes up to RM2 for subsequent hours. Still cheaper than those kiddie ride machines at RM2/3 a pop. Only a small problem... 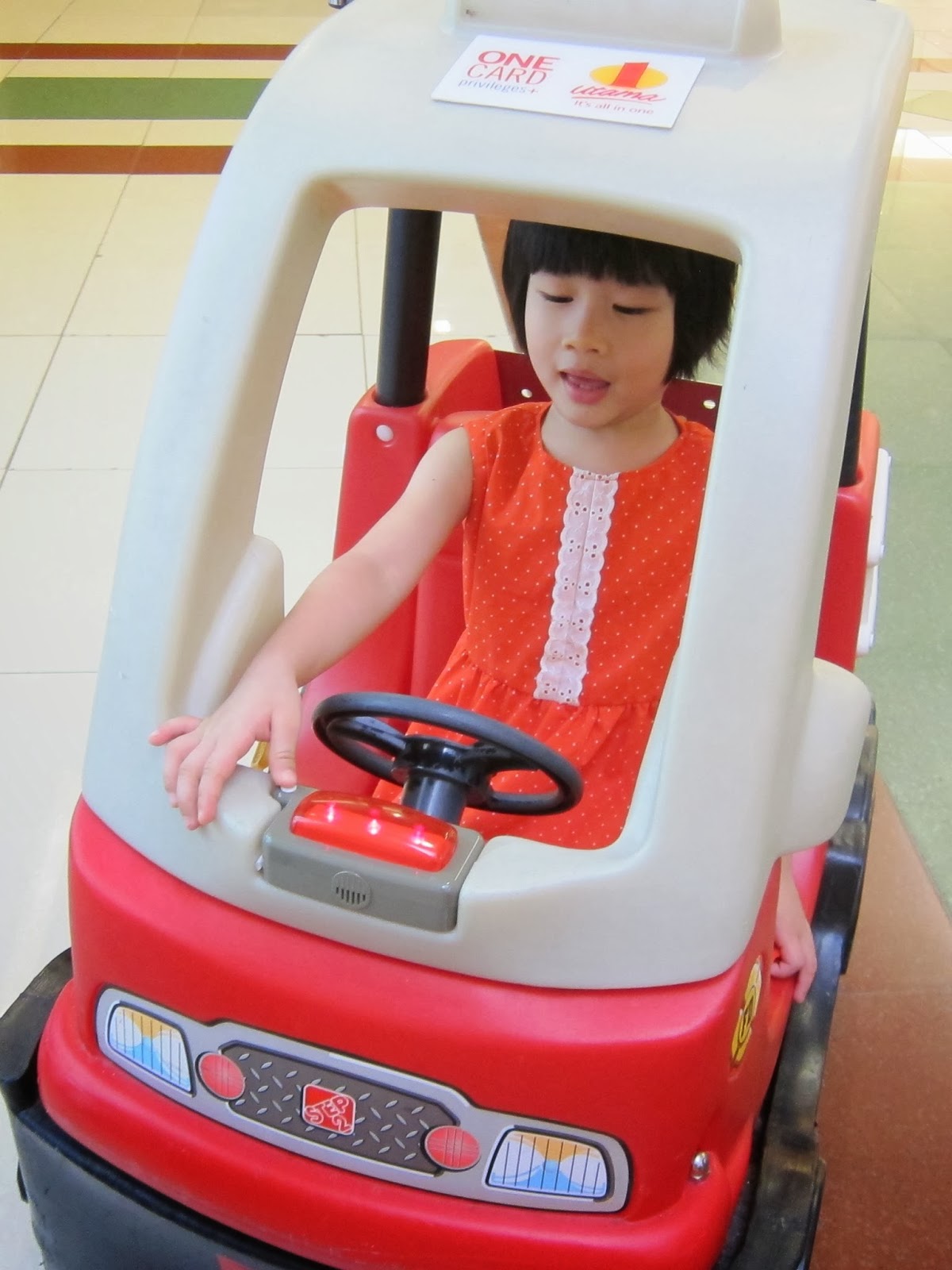 What about the other girl? Well, she can stand in the space at the back. But she isn't too happy... 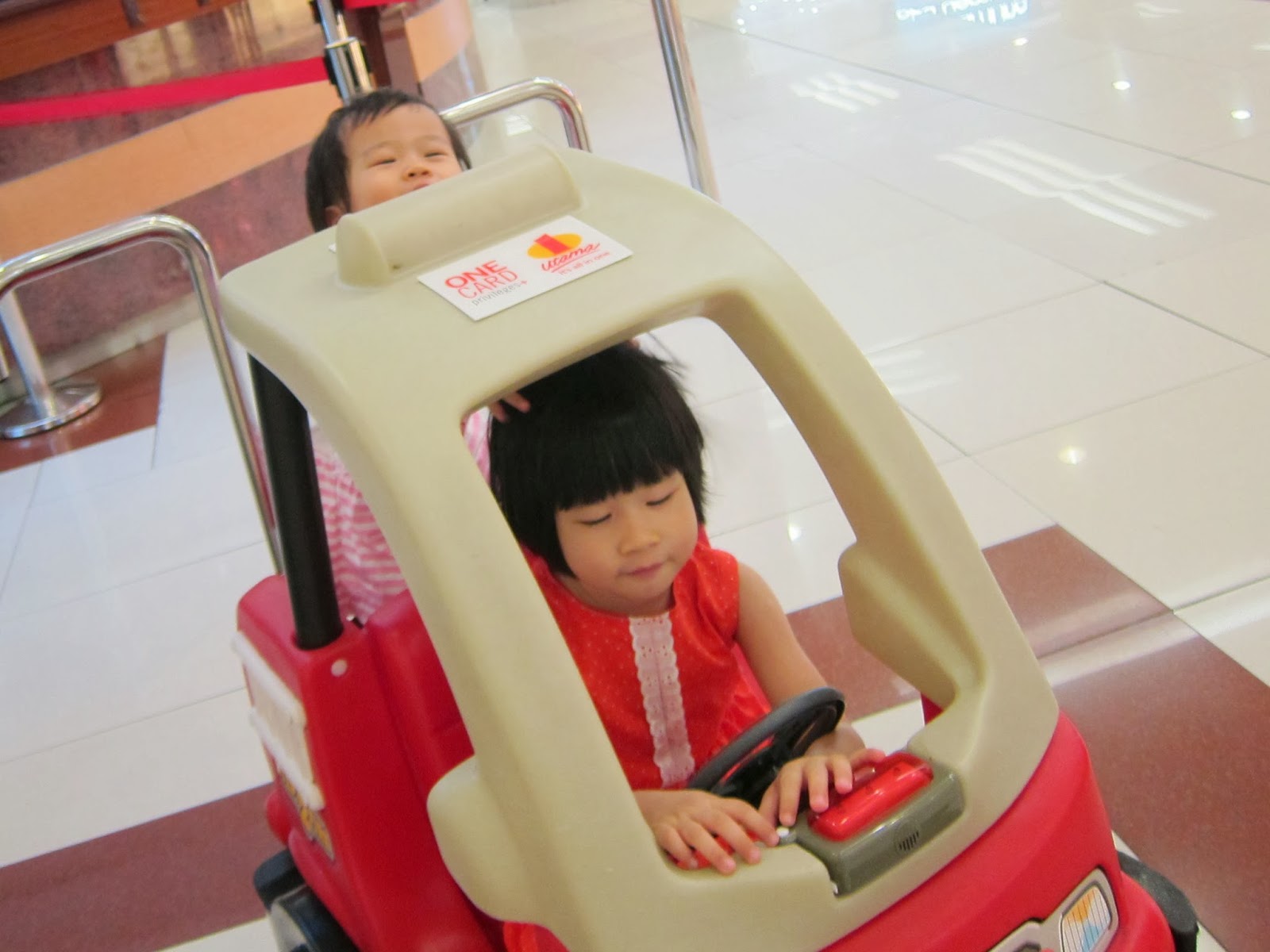 Well, two can also squeeze into the driving compartment. 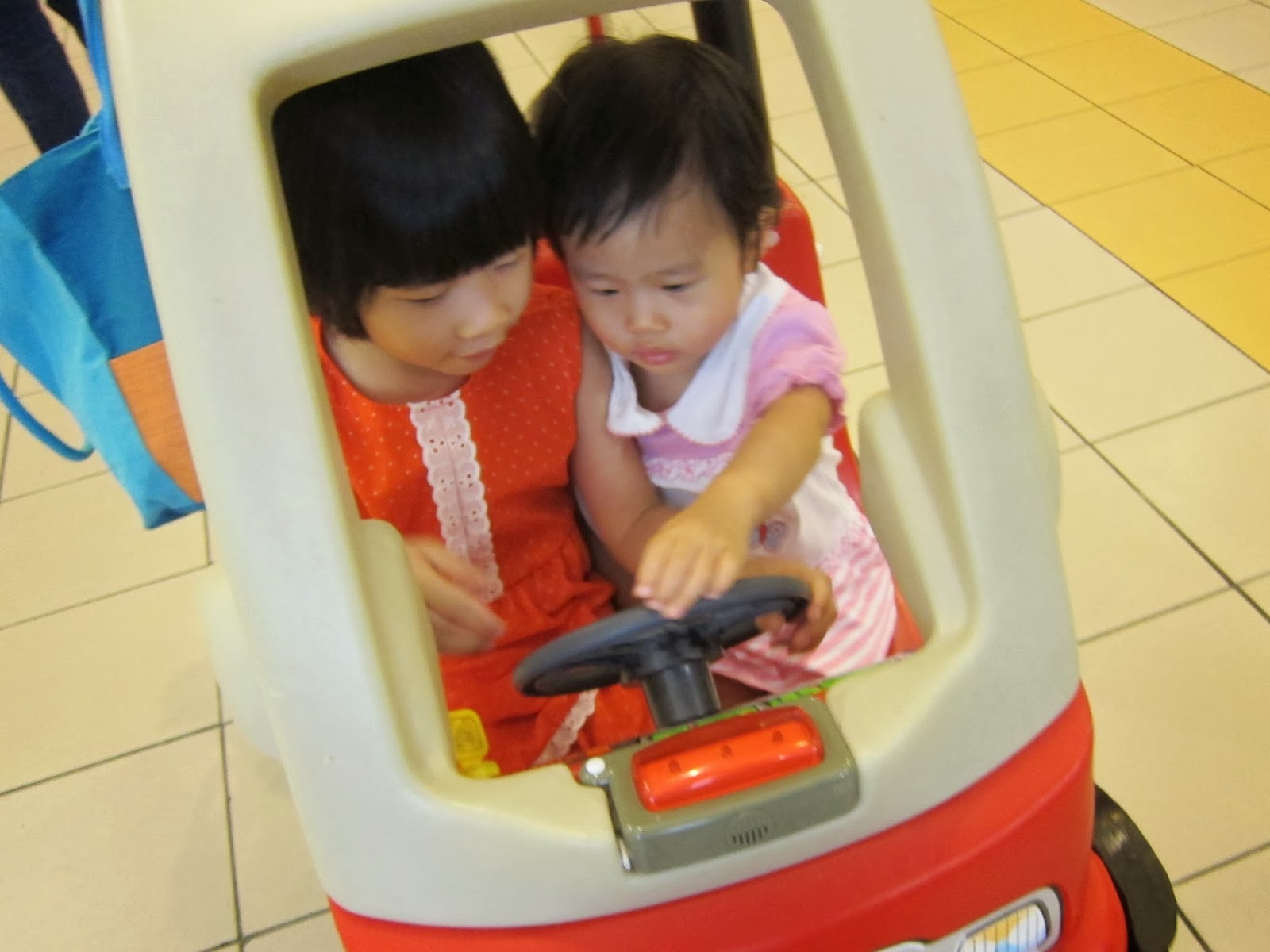 SE: Ahhh this is better. And I will drive. 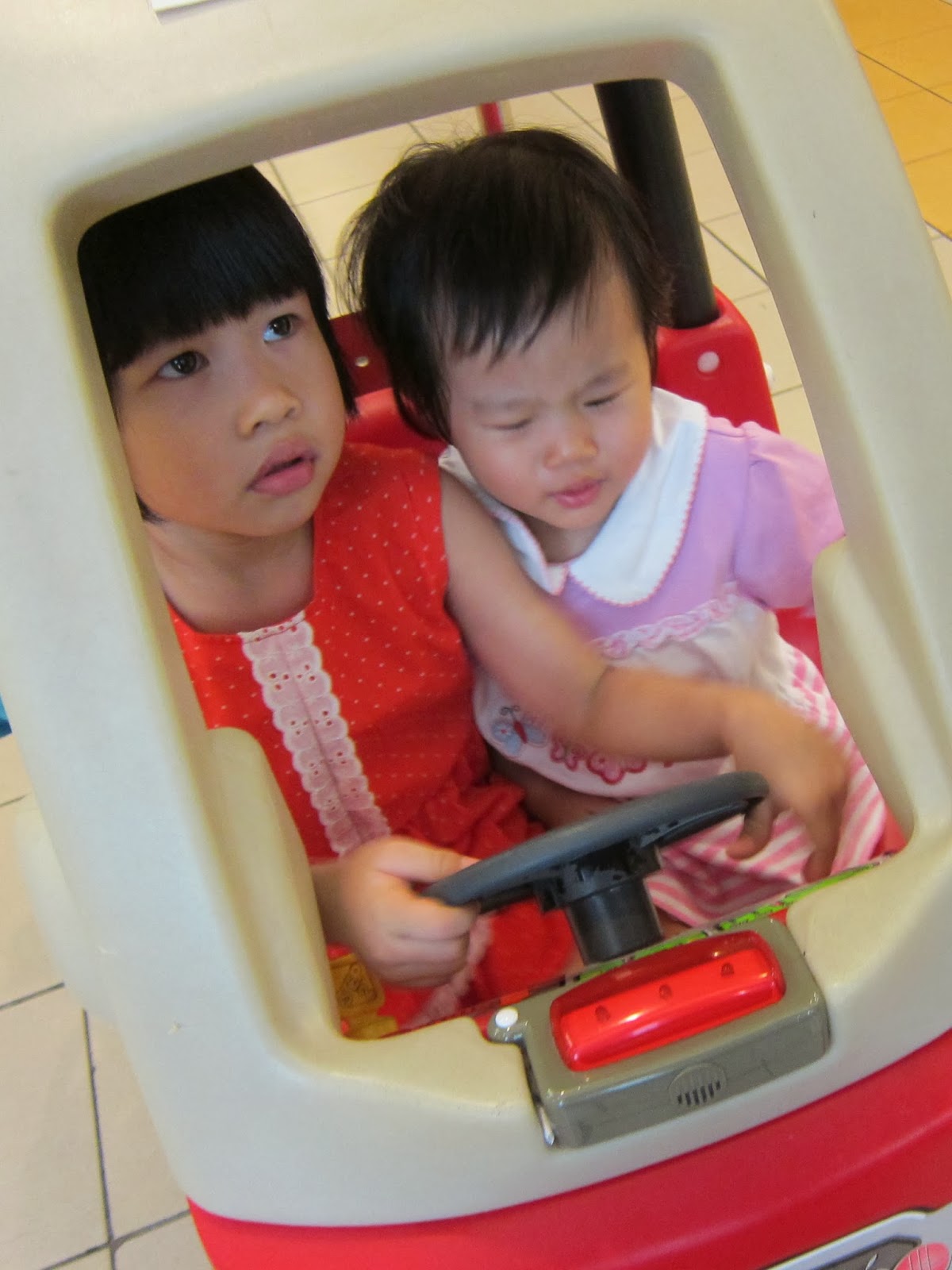 The next time we got this pushcar again, this is what SE did... 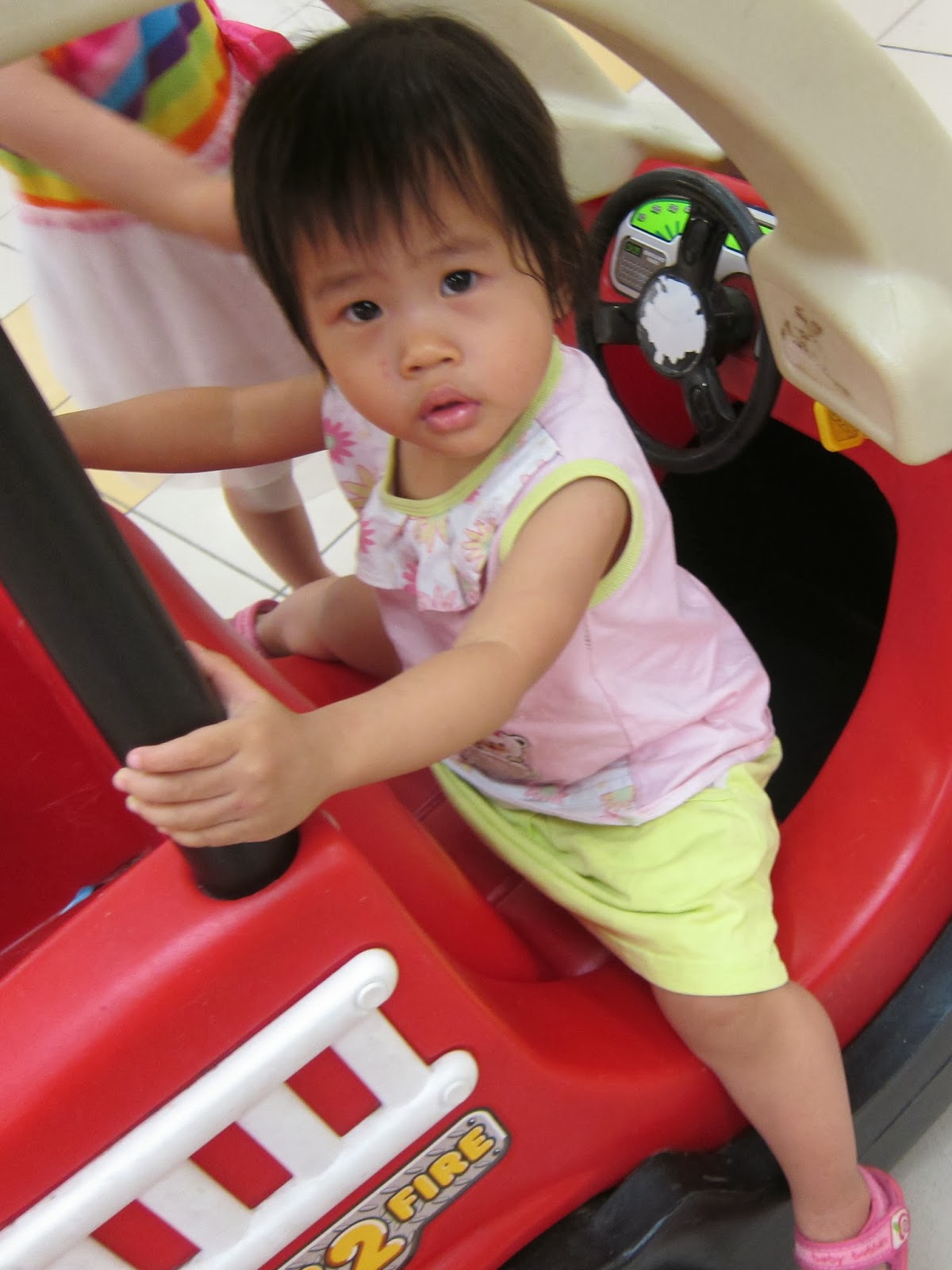 And she insisted on riding this way, facing backwards, while we pushed it along. While the big girl walked alongside complaining away. 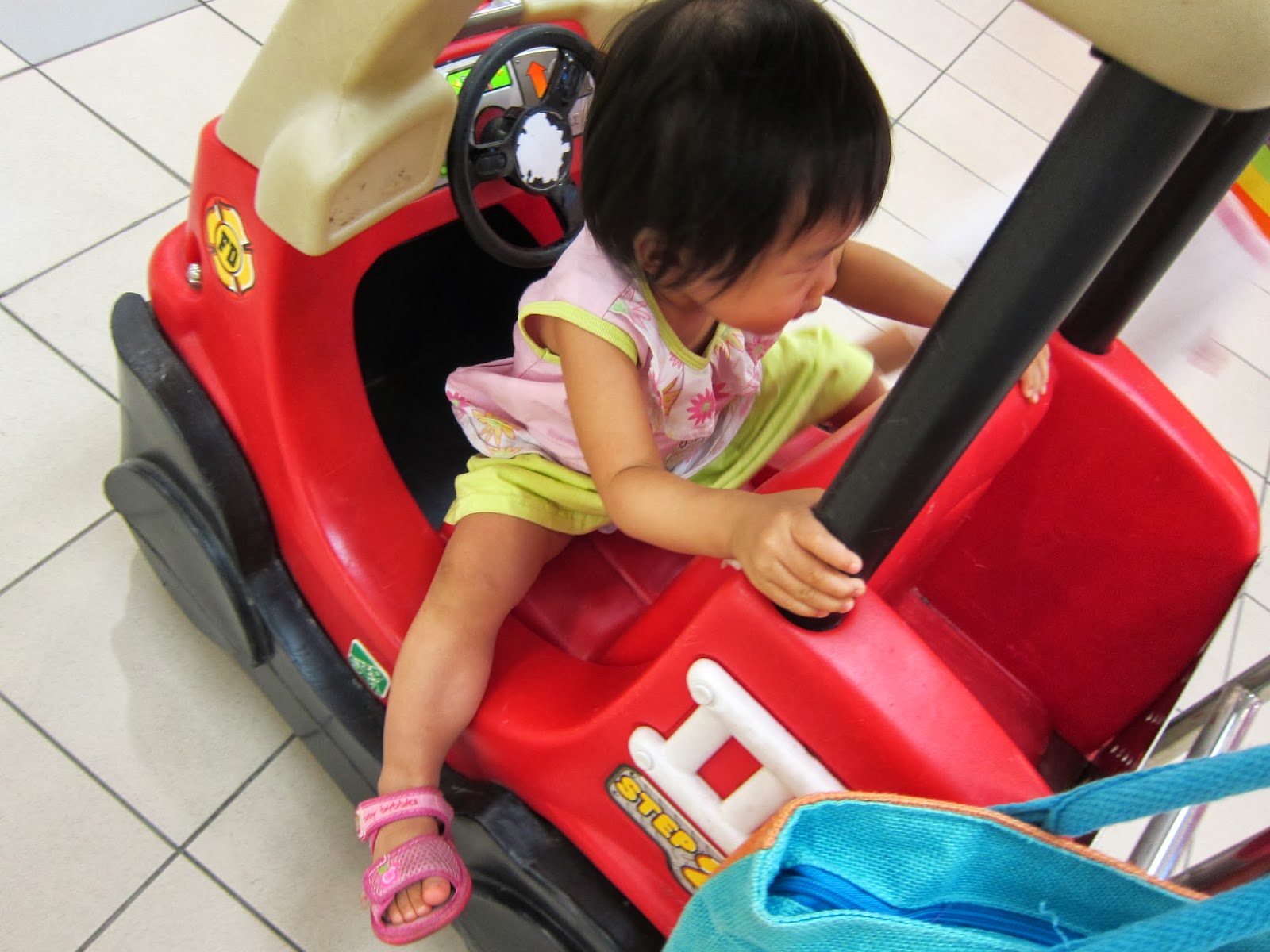 Aiyo how? Either need to get TWO pushcars or make it a lesson in sharing and taking turns!
Posted by Stacy at 9:30 PM 5 comments:

My girls crack me up when they play. Here JE has stuffed her doggy and tiger cub soft toys up her shirt, and helped SE stuff the octopus toy up her shirt.  She said the toys were their babies and they were going to the hospital so that the babies could come out. 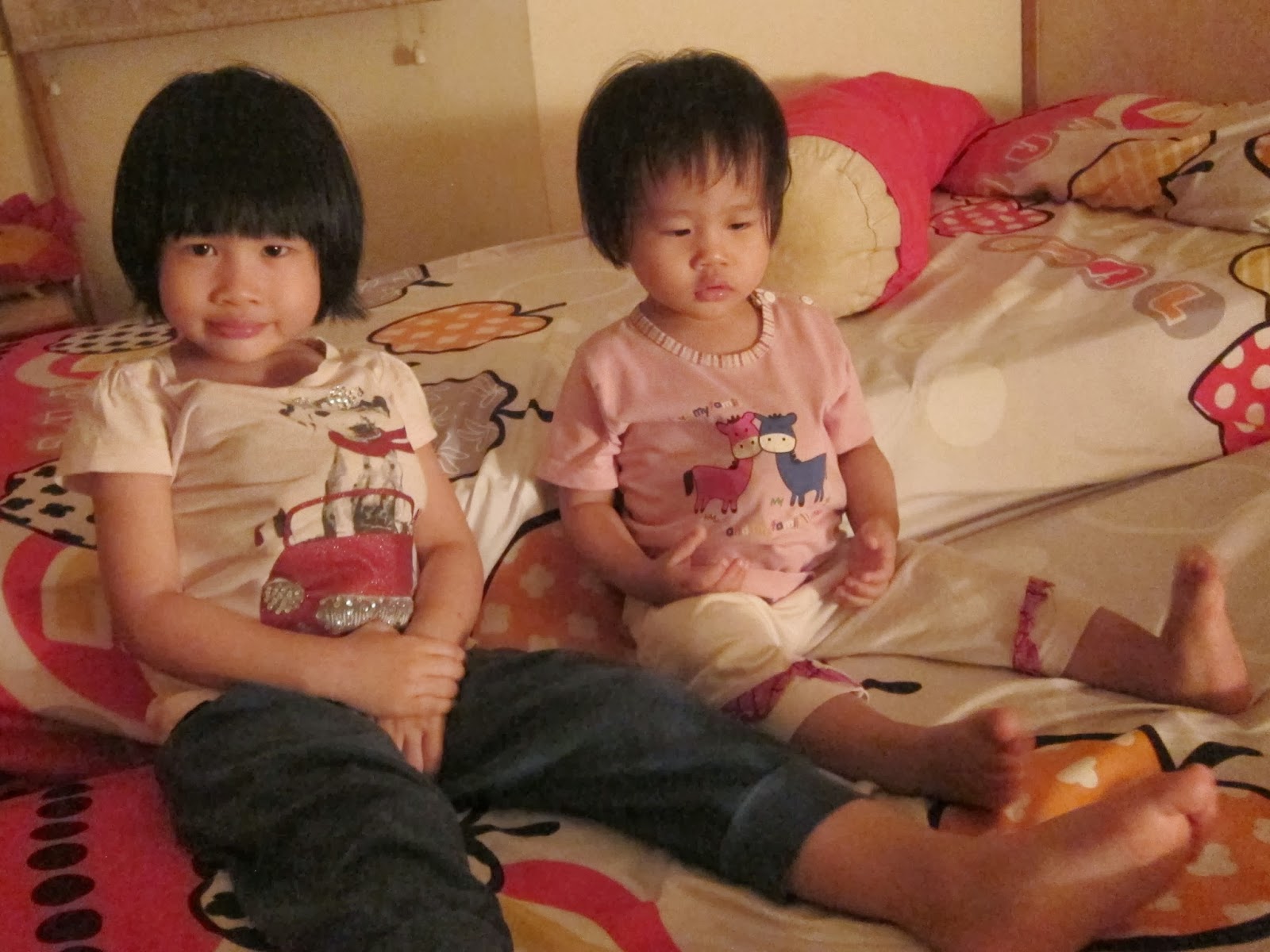 We're going to have our babies in the hospital 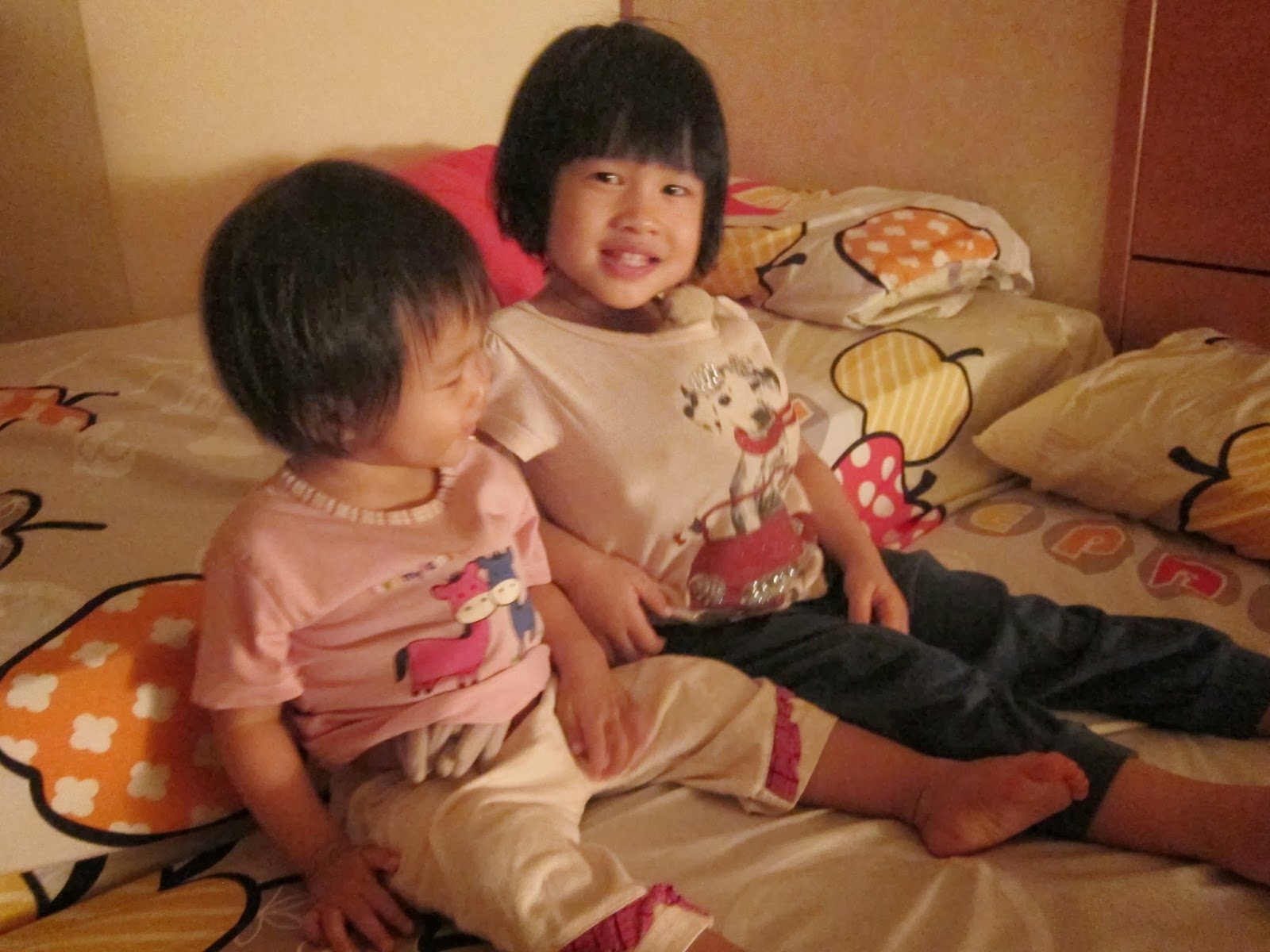 SE: The legs of my baby are coming out!

JE also sometimes stuffs her doggy up her shirt and says it's drinking milk. That's my breastfed girl! *proud* Heh heh.
Posted by Stacy at 12:40 AM 2 comments:

Recently in my kitchen... 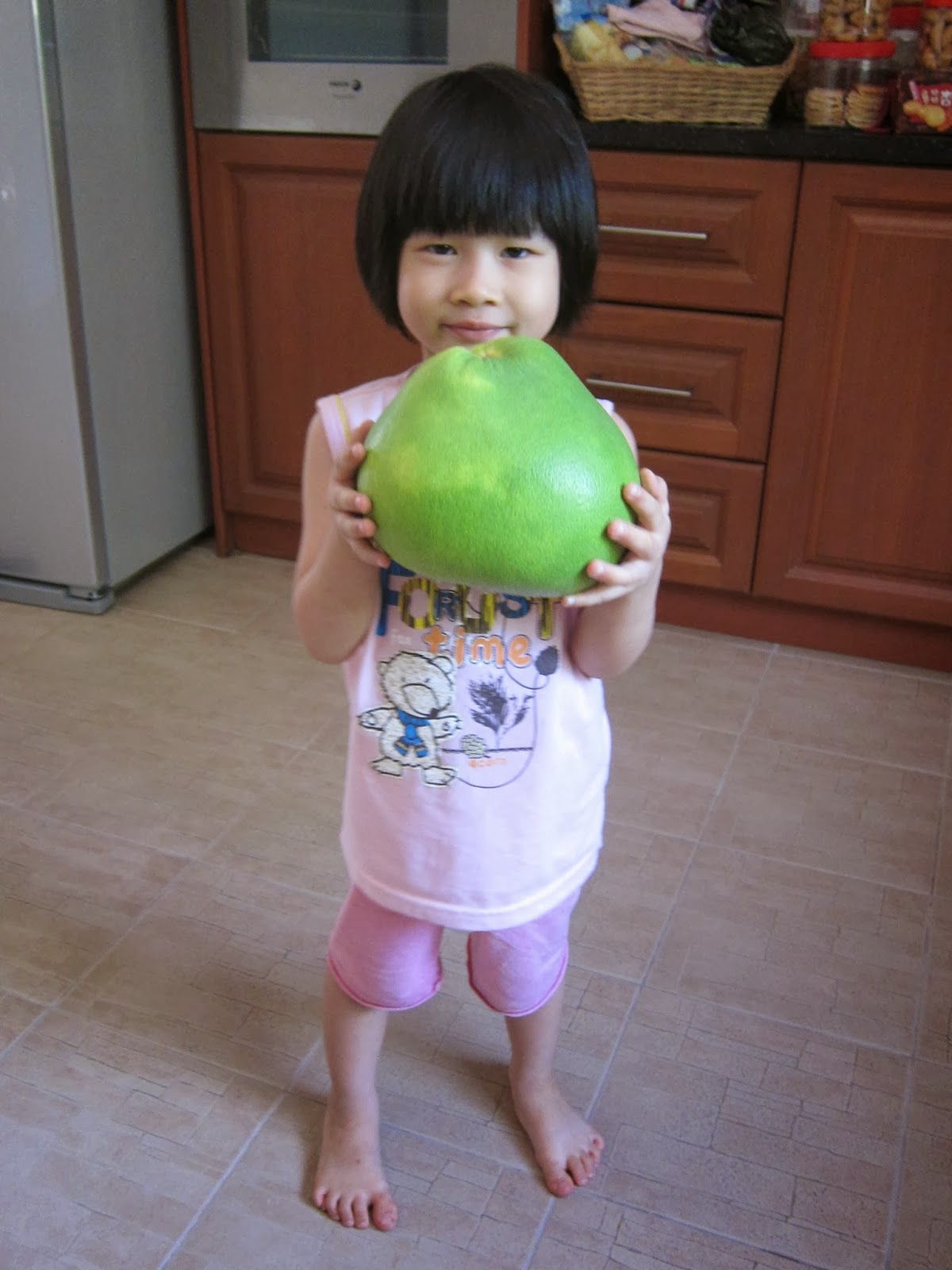 We got this pomelo for Chinese new year! 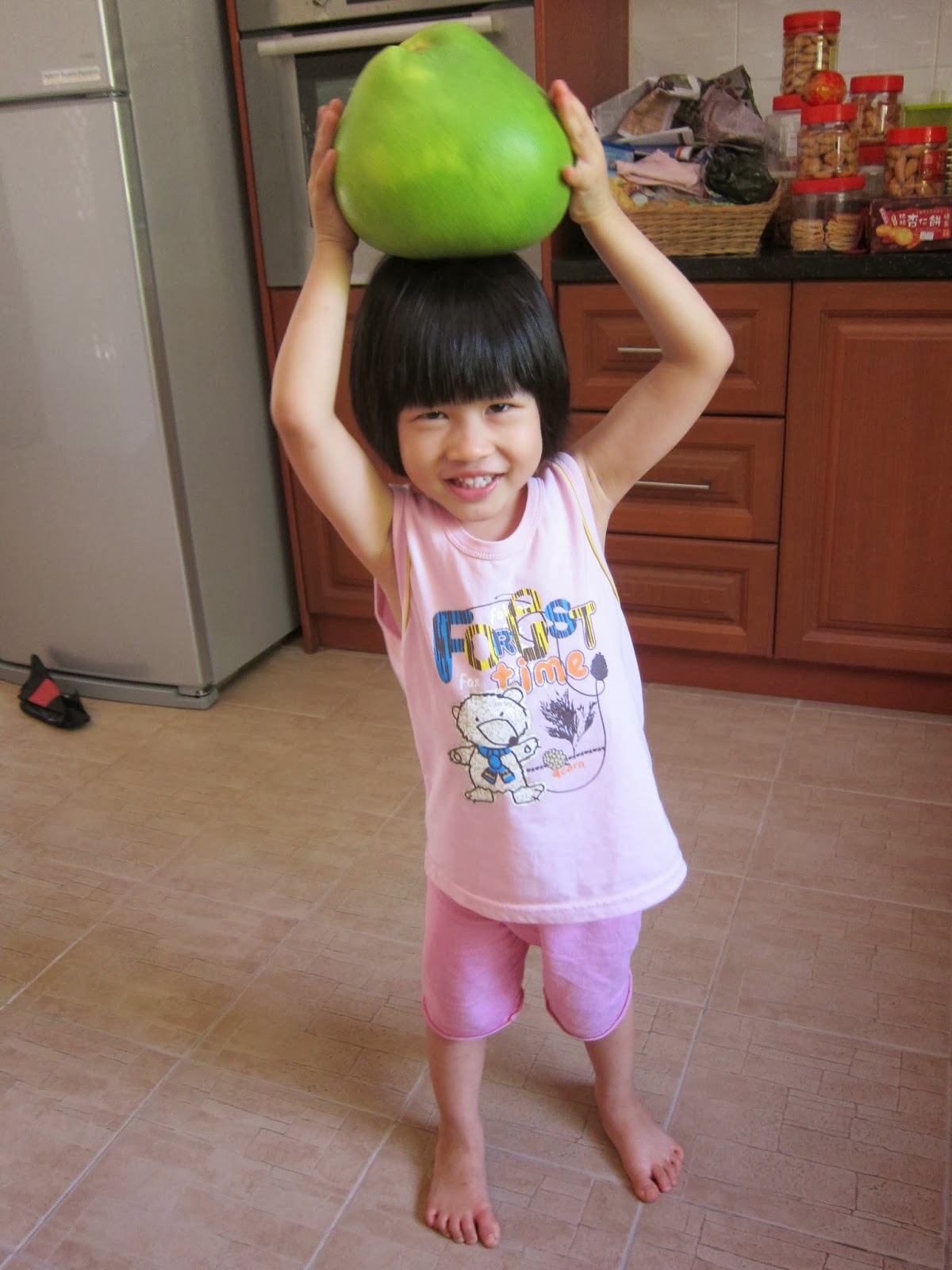 I can put it on top of my head hehehehe 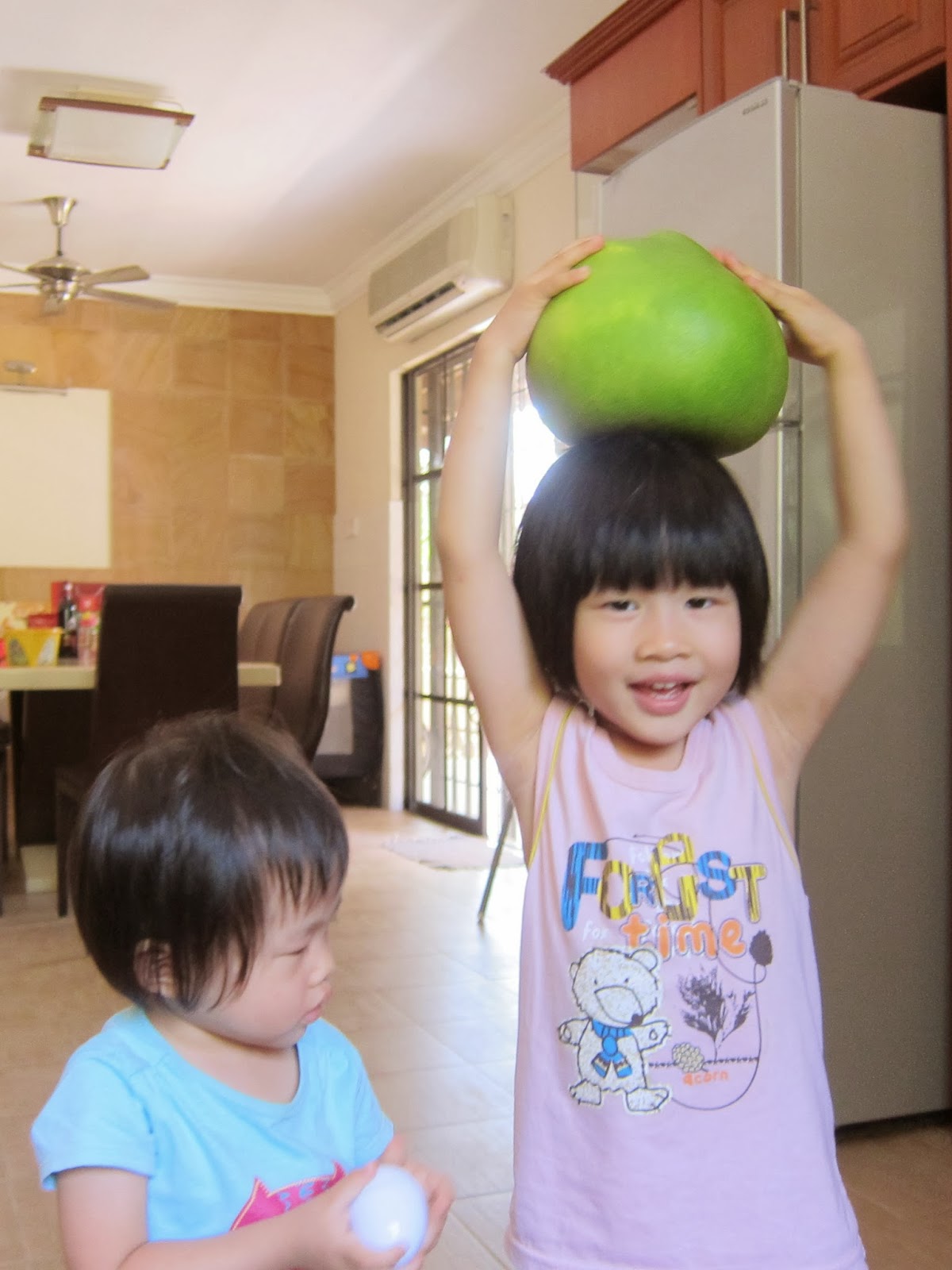 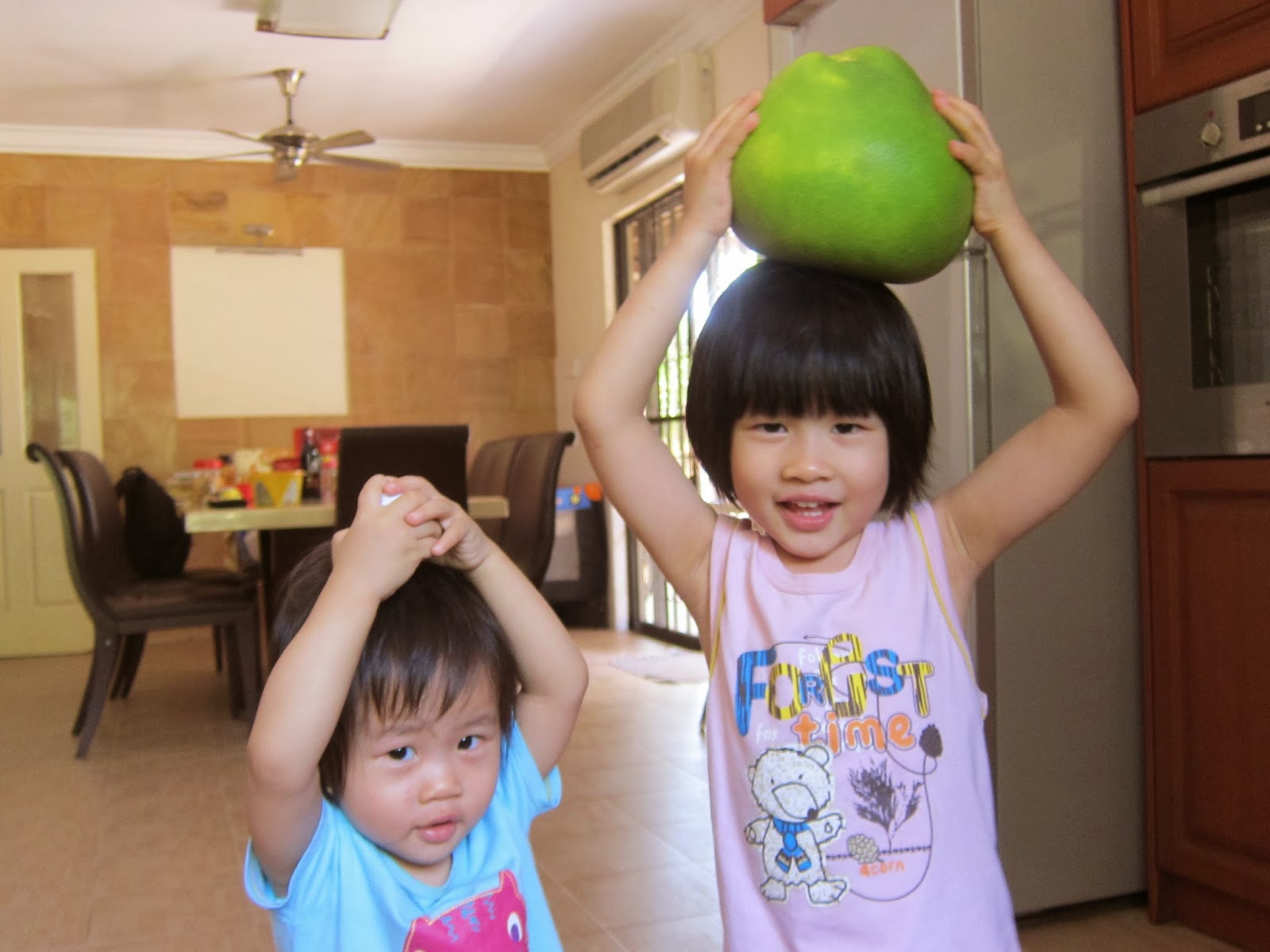 SE: I can put this toy egg on top of my head too! 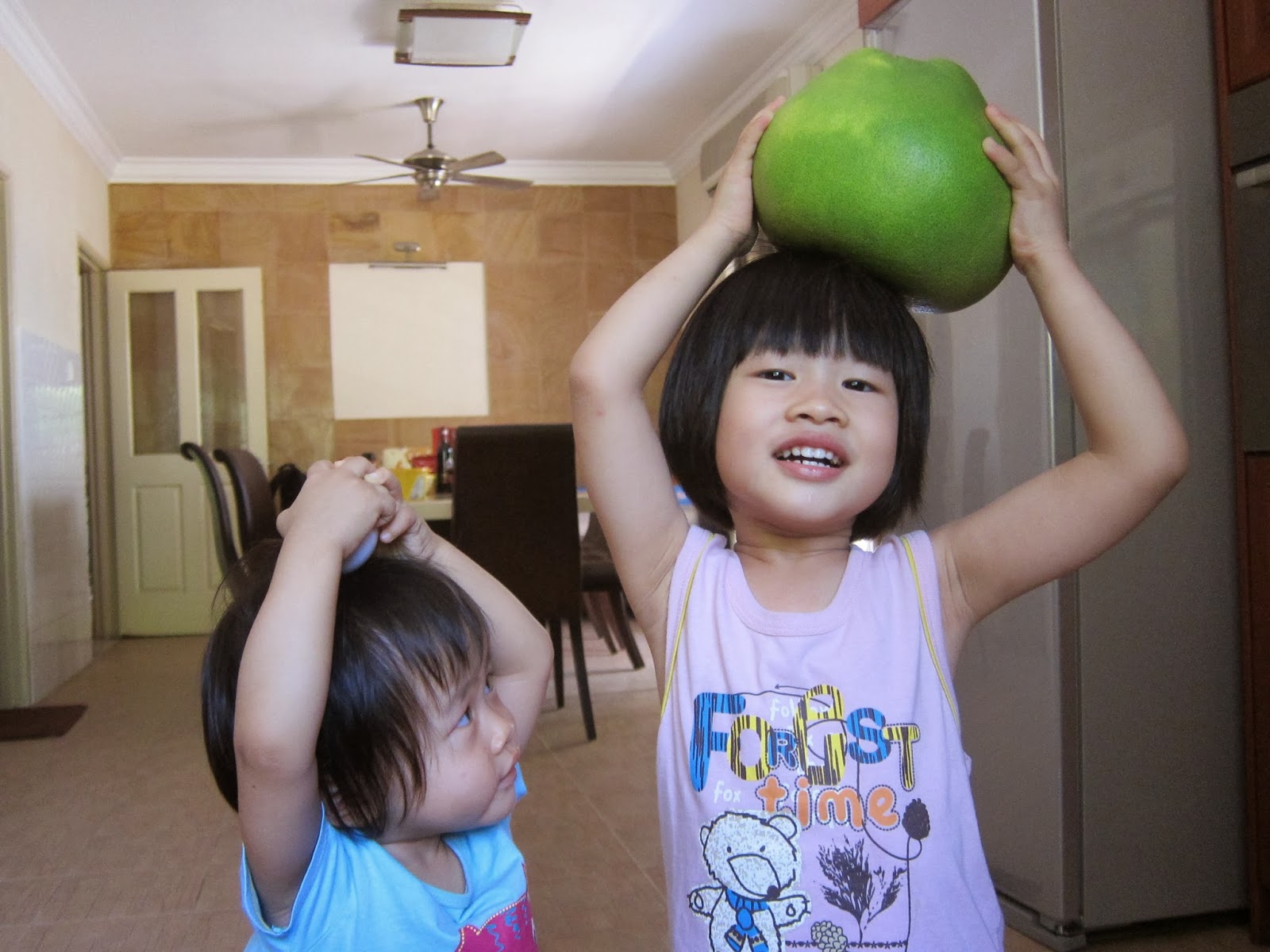 SE is referred to as 'the small one' in our household. And she's growing up. It's nice having more time to myself now that I've stopped breastfeeding and don't have to schedule my routines in 3-4 hour chunks in order to nurse her or pump milk. And I feel rested now that I can sleep without waking up 2-3 times every night to feed her. But I'm aware that these precious baby/early childhood of my girl will go past only too soon.  For now, I am relishing kissing her still-baby-soft hair, having her small body fitting snugly in my lap and being able to easily lift and cuddle her.

SE at 21 months:
1. Is still super-LOUD.  Heard her cry for the first time after we brought her home (actually to my parents' place for my confinement) from the hospital at 3 days old. Hoo the sheer volume from that tiny baby! Now, you can easily hear her bawling from far, far away! 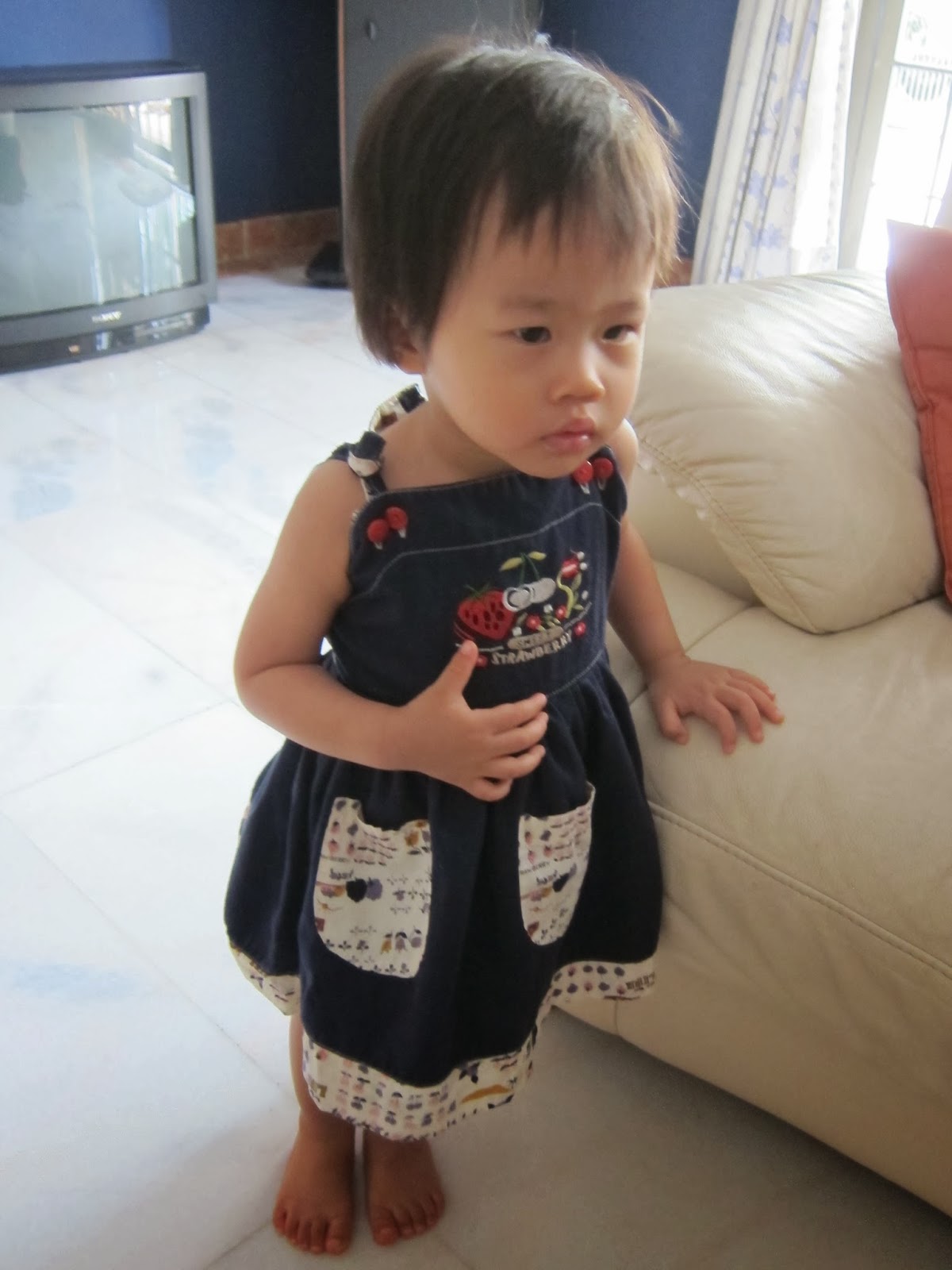 Let me get ready to test my vocal cords

2. Loves to eat. Ahh I am SO glad to have a kid who likes her food. She still finishes her two 5oz servings of  homemade baby food but gets some rice/veg/meat/soup as well from our lunch and dinners. 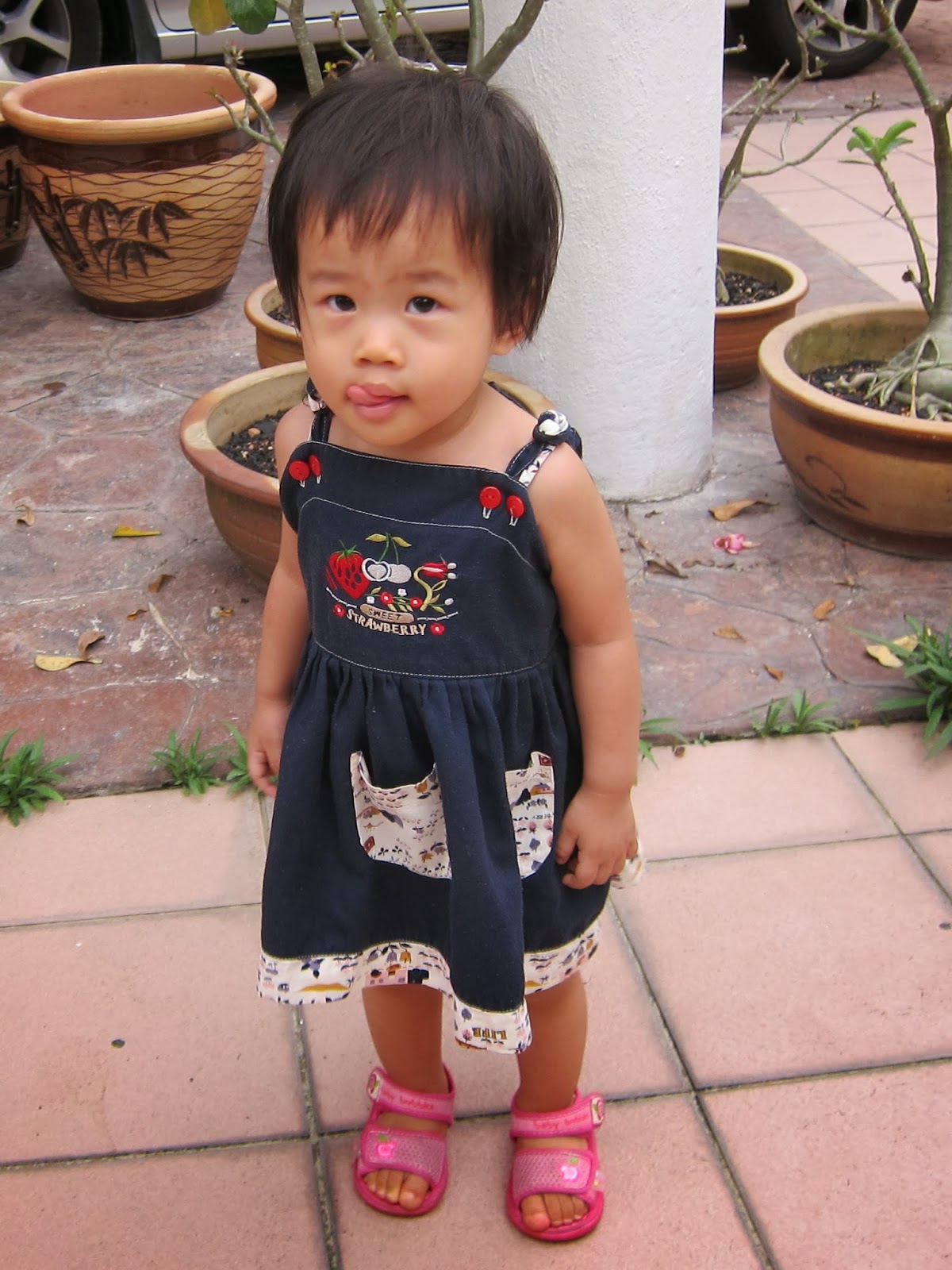 3. Is very stubborn and determined to get what she wants. That includes wanting things other people are having, or insisting on a particular person feeding her using a particular utensil. Or you could be minding your business sitting comfortably and she'd come and try to push you out of the way as she'd decided to walk that way or put something right where you were sitting. 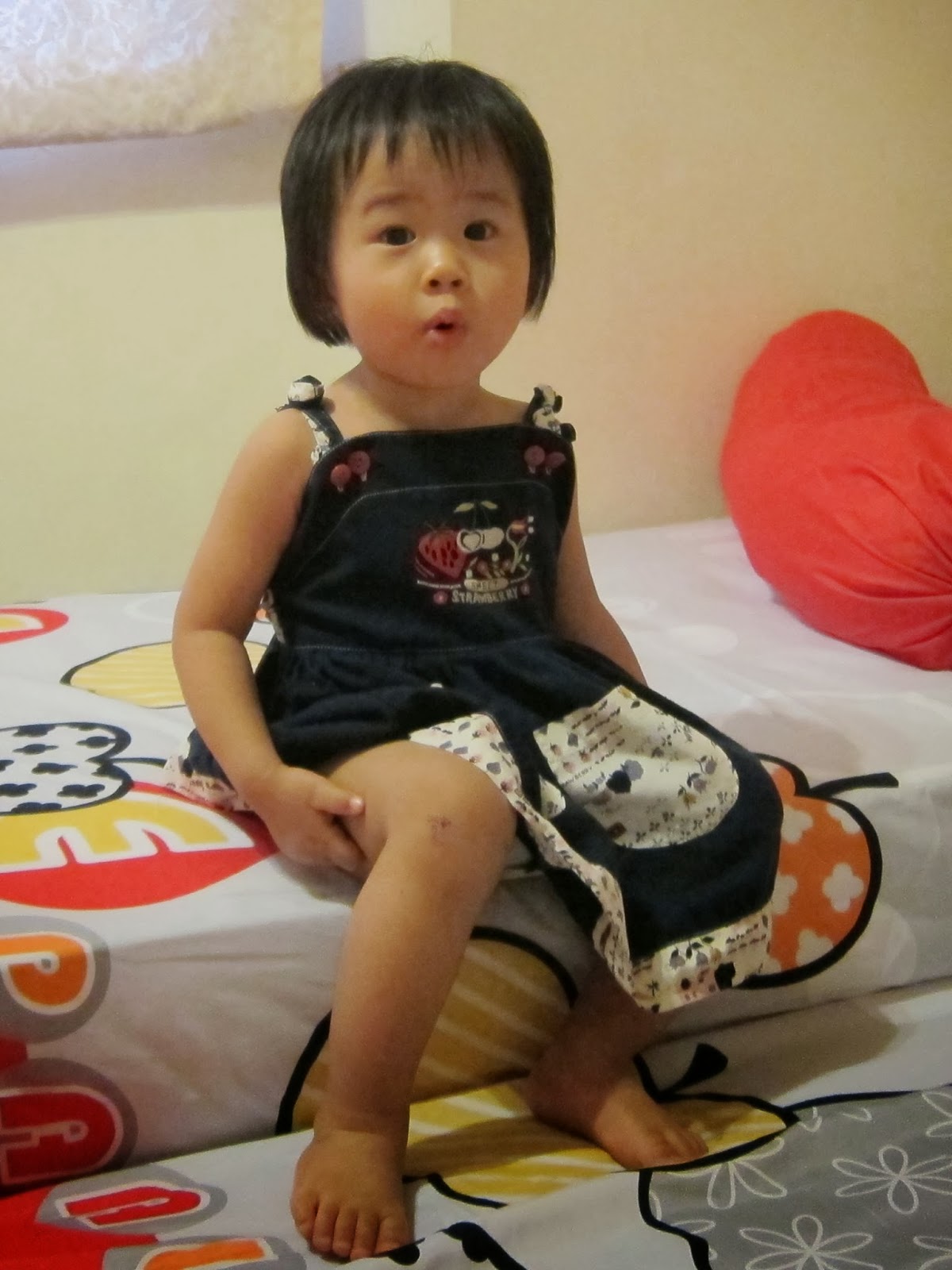 Oo I think you're having something I want. Gimme!

4. Likes music. She'd sway her head, shake her arms and move her body. Sometimes I move her arms for her to music. And sometimes when there is music, she comes over to me with her arms out-stretched for me to move them. Gotta teach her some moves! 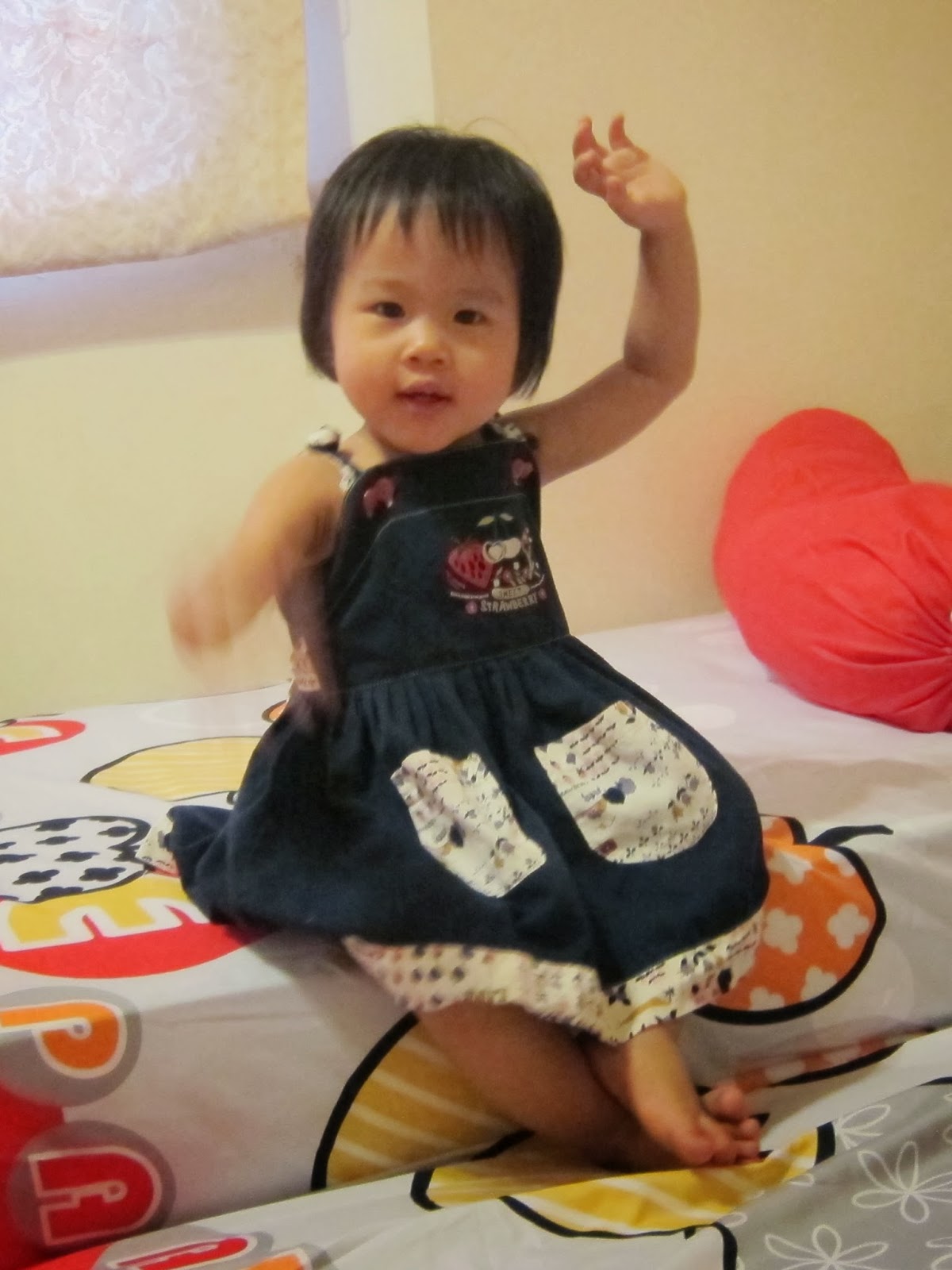 What else... she's a very slow teether. At 1 year old, she didn't have a single tooth yet. Now she has barely 8 teeth (not all are fully out yet).

She's starting to talk as well. All in all, a very cute package, this one!
Posted by Stacy at 1:46 AM 2 comments:

I just have to post this up! So hubby invited a few friends over for a CNY eat/drink session. He agonised for days over cooking the lunch ourselves, or eating at a restaurant then adjourning home for drinks. Eventually he decided on the former 3 days before the event.

The focus was his vintage wines, the best few bottles retailing at RM300-400 each. Served together was to be a variety of cheeses and good snacks. Lunch was supposed to be light.

But hubby kept adding to the list! He made porridge as a 'test' before the lunch. And also bak kut teh. When I protested that porridge and BKT doesn't go, he went all defensive and said you must have lots of food when you invite people over. Oo-kay.

The day before the lunch, the man was like a jack-in-the-box. He went to the market. Some stalls still weren't open. He came home with whatever he managed to buy.  Then he went out again to the shops for BKT herbs. Came home and went out again to Tesco (which is pretty far from my house).

The night before the lunch, hubby was missing for a long time. I only realised later that he was in the kitchen busy cutting up cabbage, cucumber, peppers and tomato for his salad. He'd also commandeered our maid for the task, resulting in 'tiok tiok tiok' chopping sounds issuing out from our kitchen. I commented on the quantity that was being produced, he got cranky and asked me to let him do what he wants to do. Oo-kay.

The day of the lunch, he went out again to Jaya Grocer and came home with a huge mango, pears, 2 green papaya and 1 green pineapple. When I enquired if the green fruits were for the salad, he said they're perfectly ripe and asked the maid to cut them up. Oo-kay.

What happened to the green papayas and pineapple? Well they were too raw to be eaten! And the salad? Only half was served, the other half is still sitting in our fridge today. Keke last laugh for me. Even hubby agreed there was overkill in quantity and variety. On the bright side, guests gave loads of compliments so hubby was happy.

Phew. I think if there had been more time, hubby would have snapped under the stress! And my fridge would be stuffed full of leftovers.

NB forgot this at first... Waiting in the wings were cocktail sausages with imported mustard. Also waxed duck steamed with Chinese sausages. Both of these were not needed. 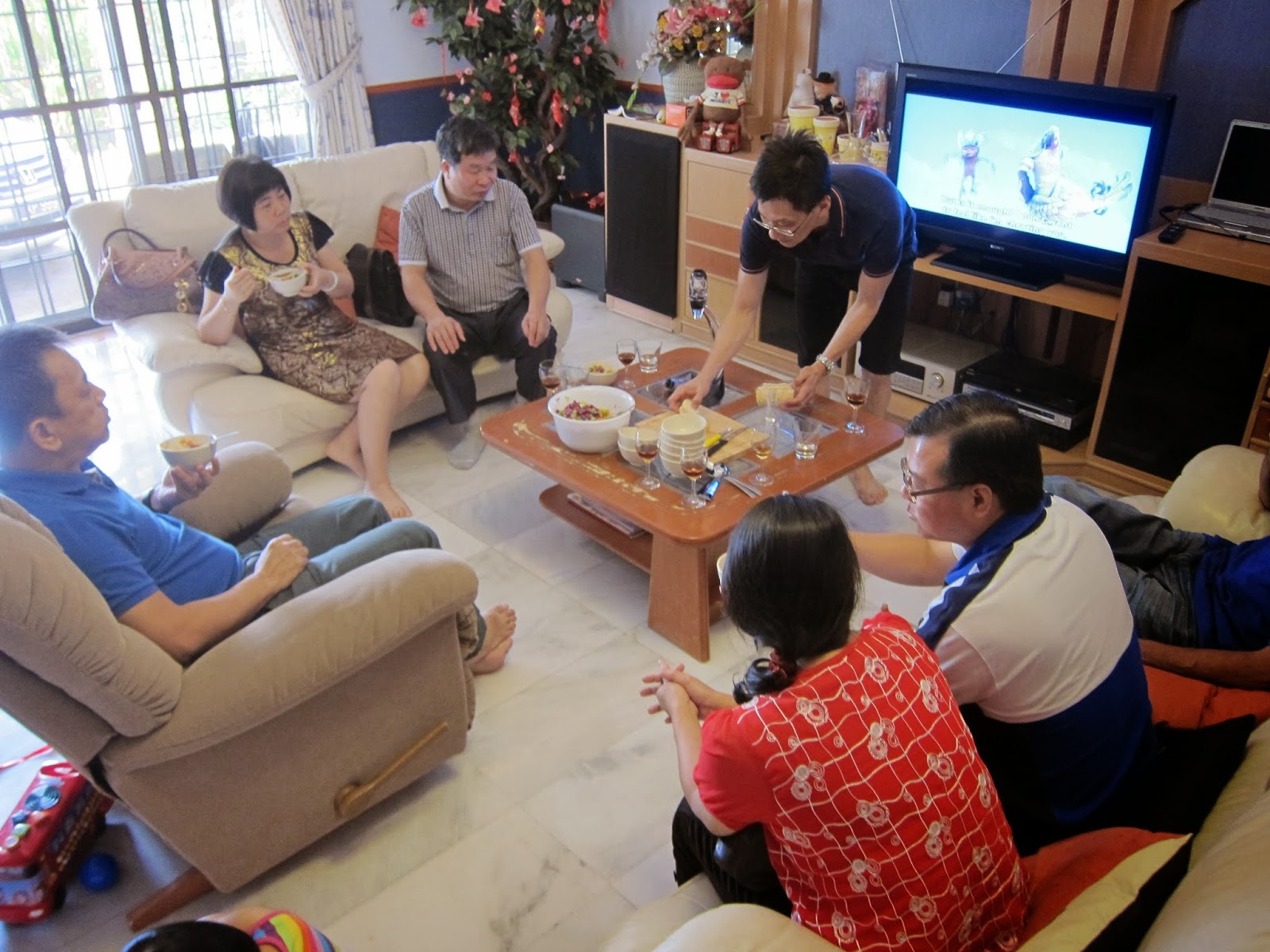 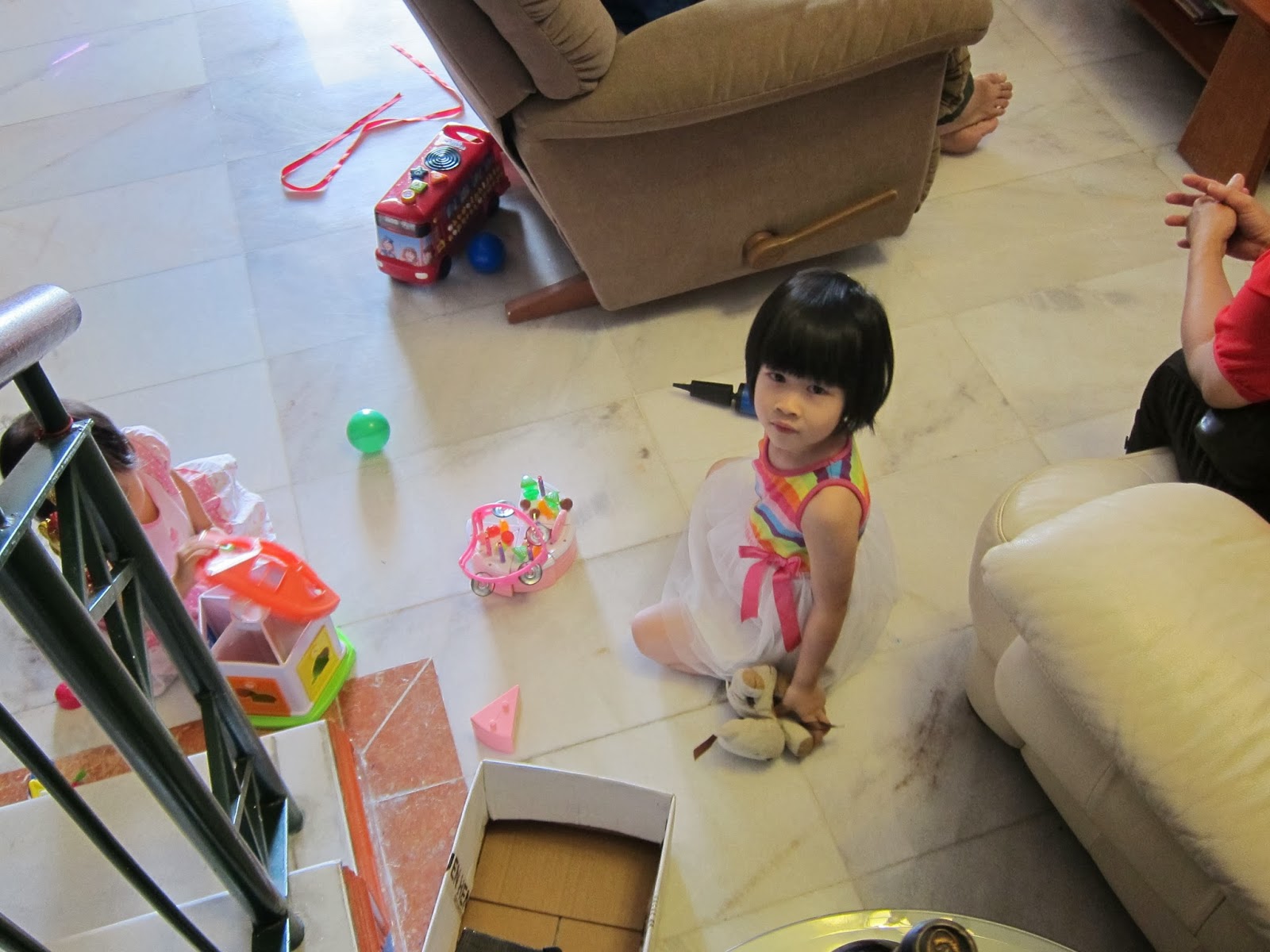 And in the corner, two girls doing what they do best... PLAY 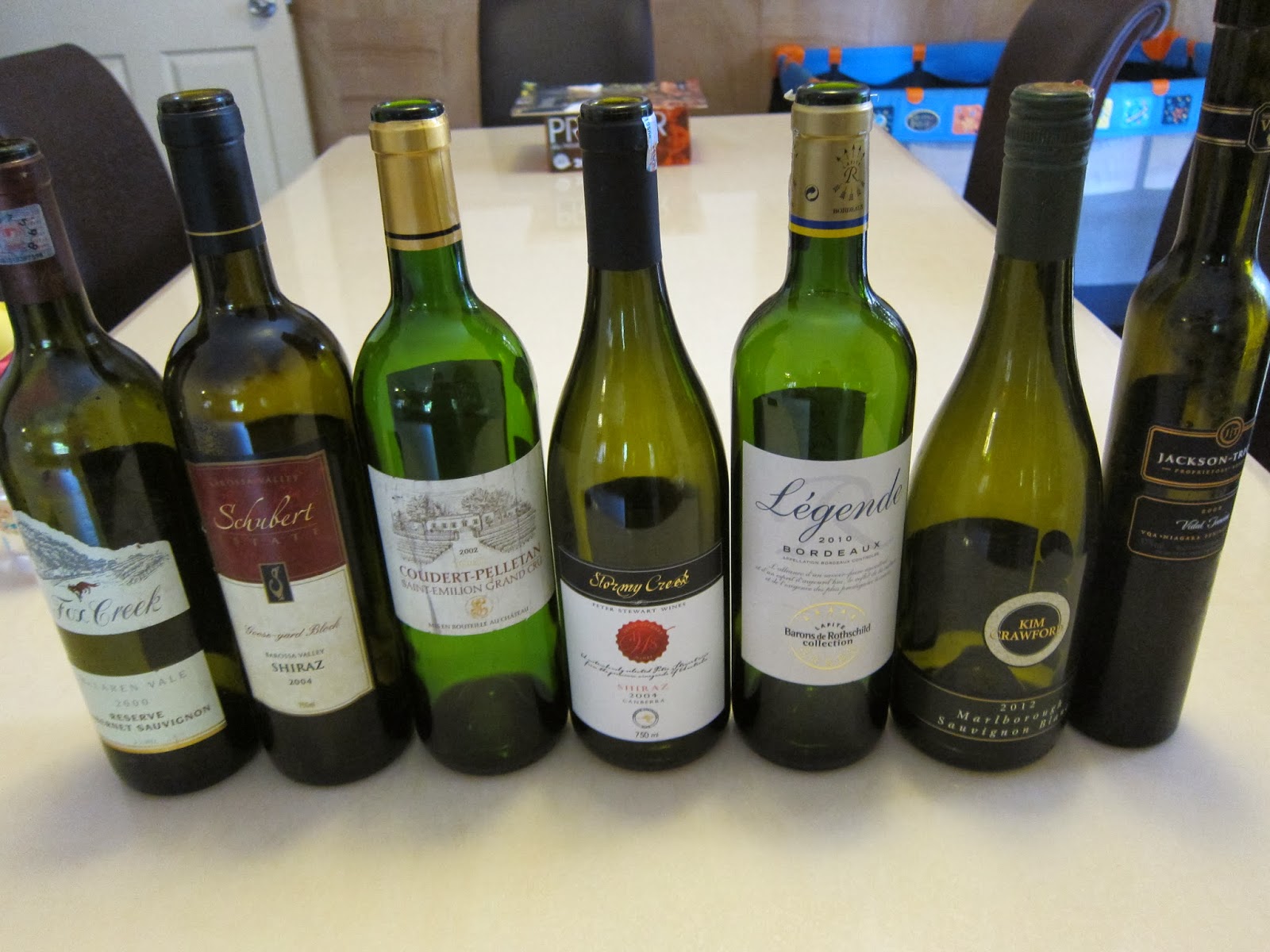 Some of the wines consumed

Shall we make it our CNY family tradition? Did this place last CNY too. This year, there wasn't a soul around besides us.  JE went into her usual sour mode when told we were taking photos. But the various things to see - flowers, weird plants, guppy fish, water - soon perked her up. 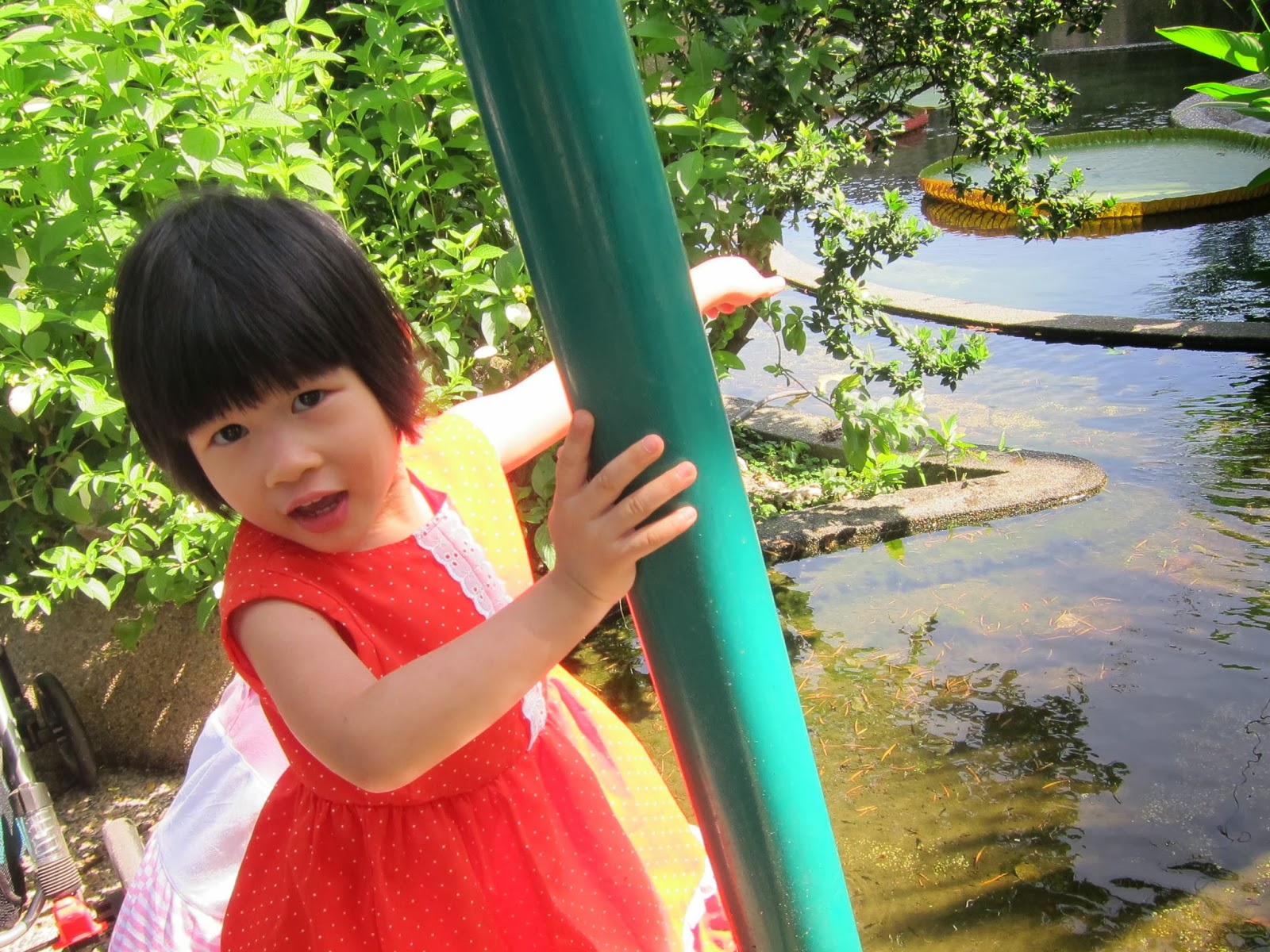 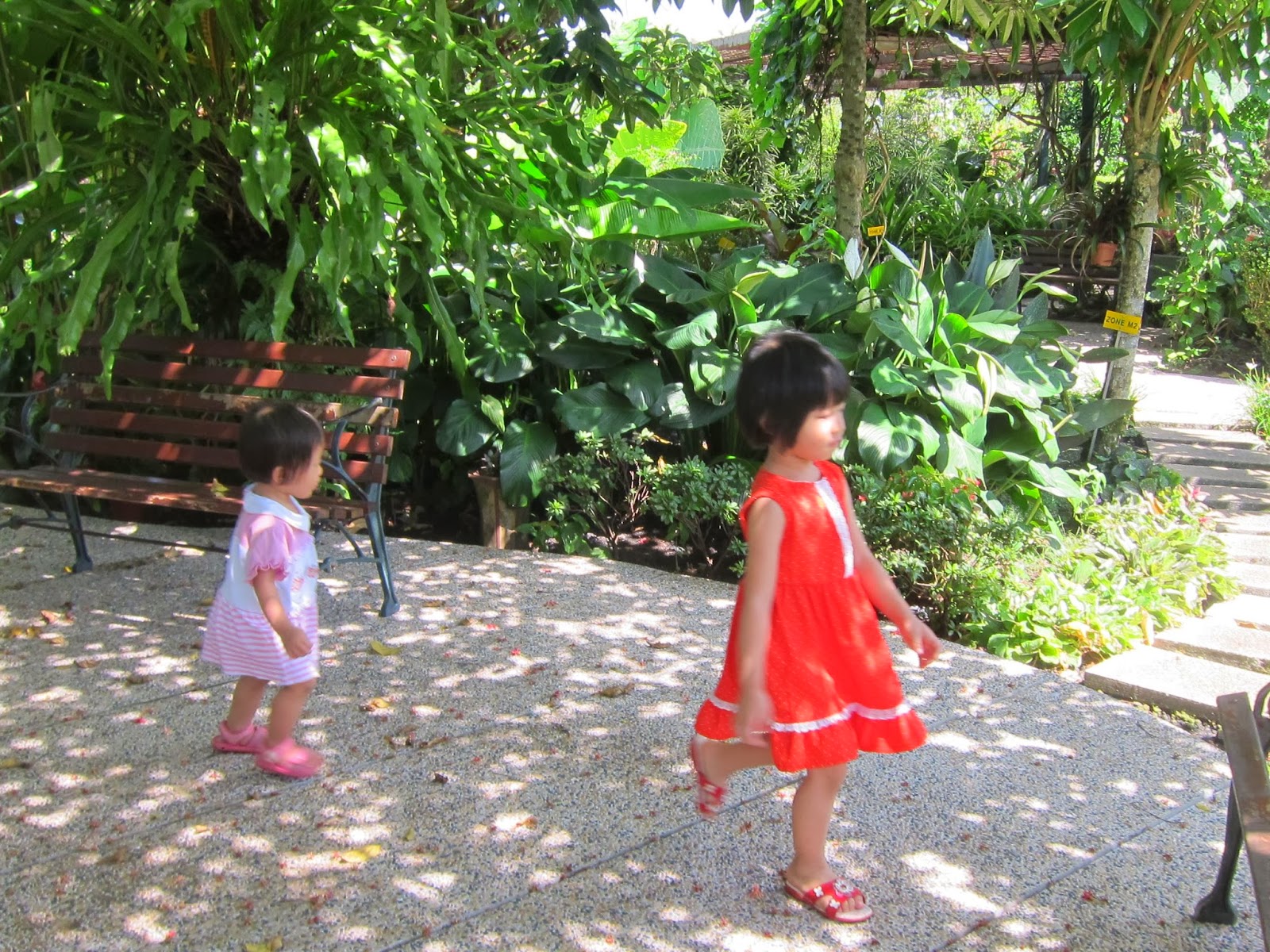 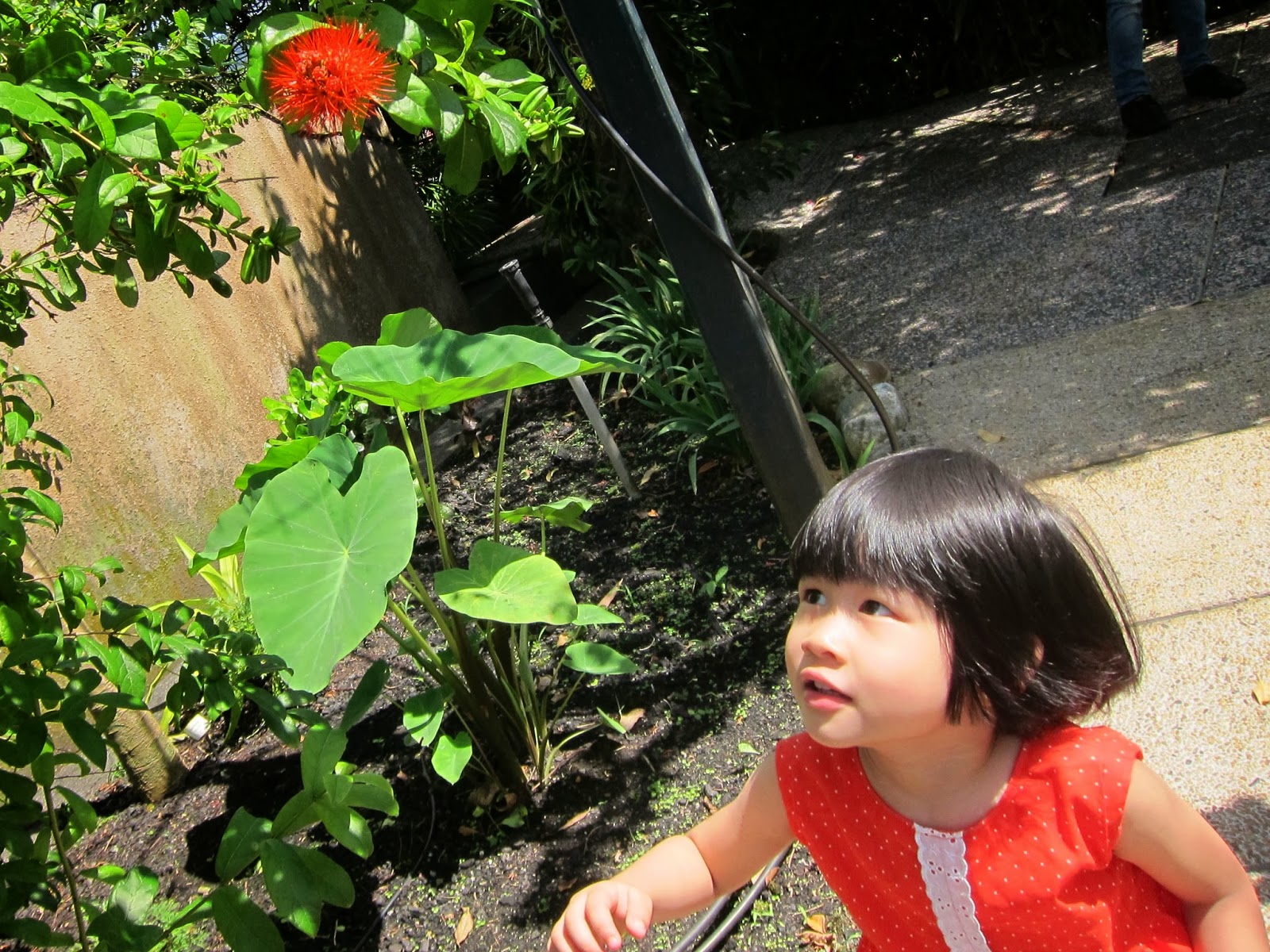 *Jump! Jump!*  I can reach that red woolly flower! 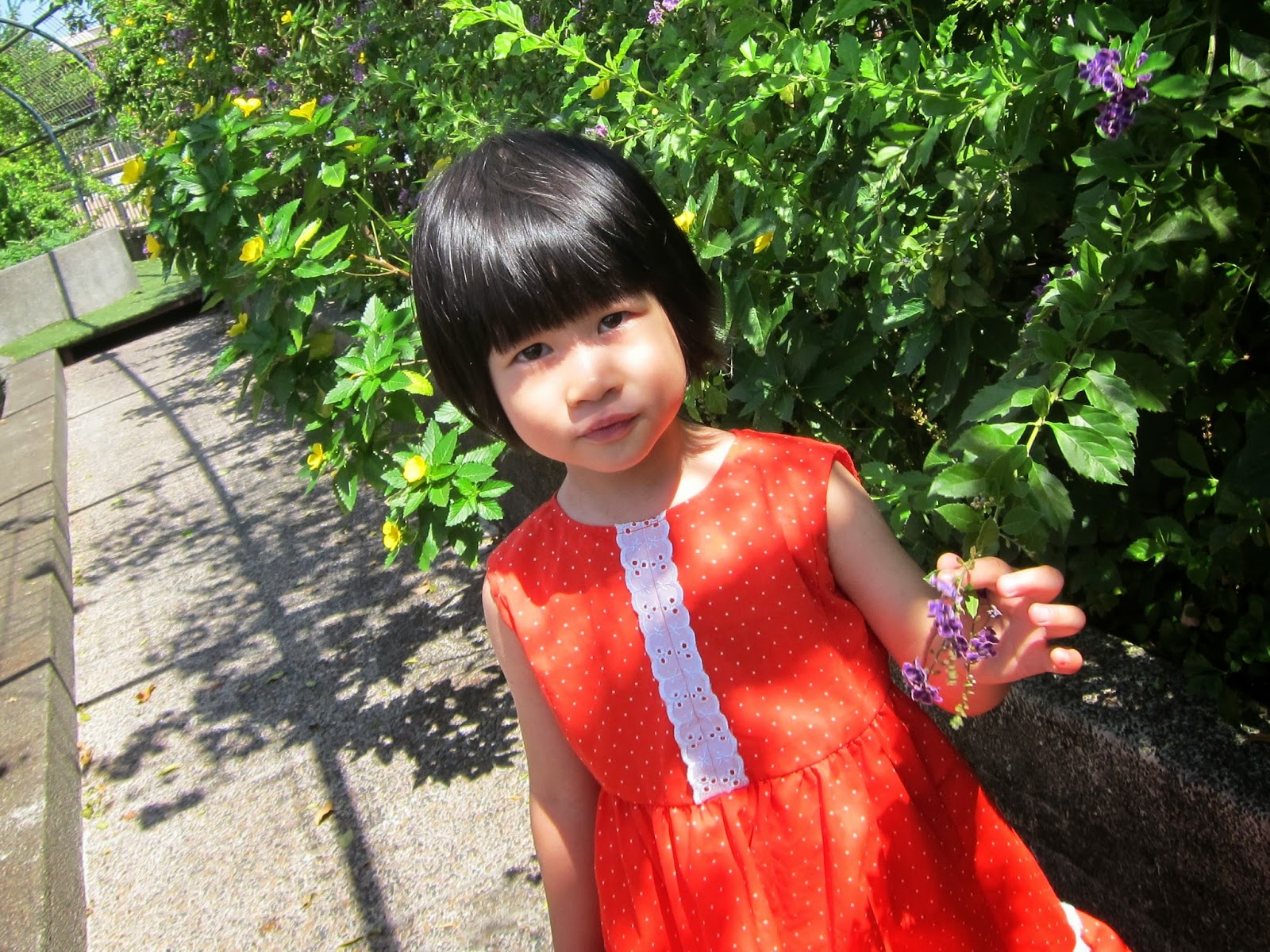 Mumm! (Yep that's what this kid calls me) We have this flower too! 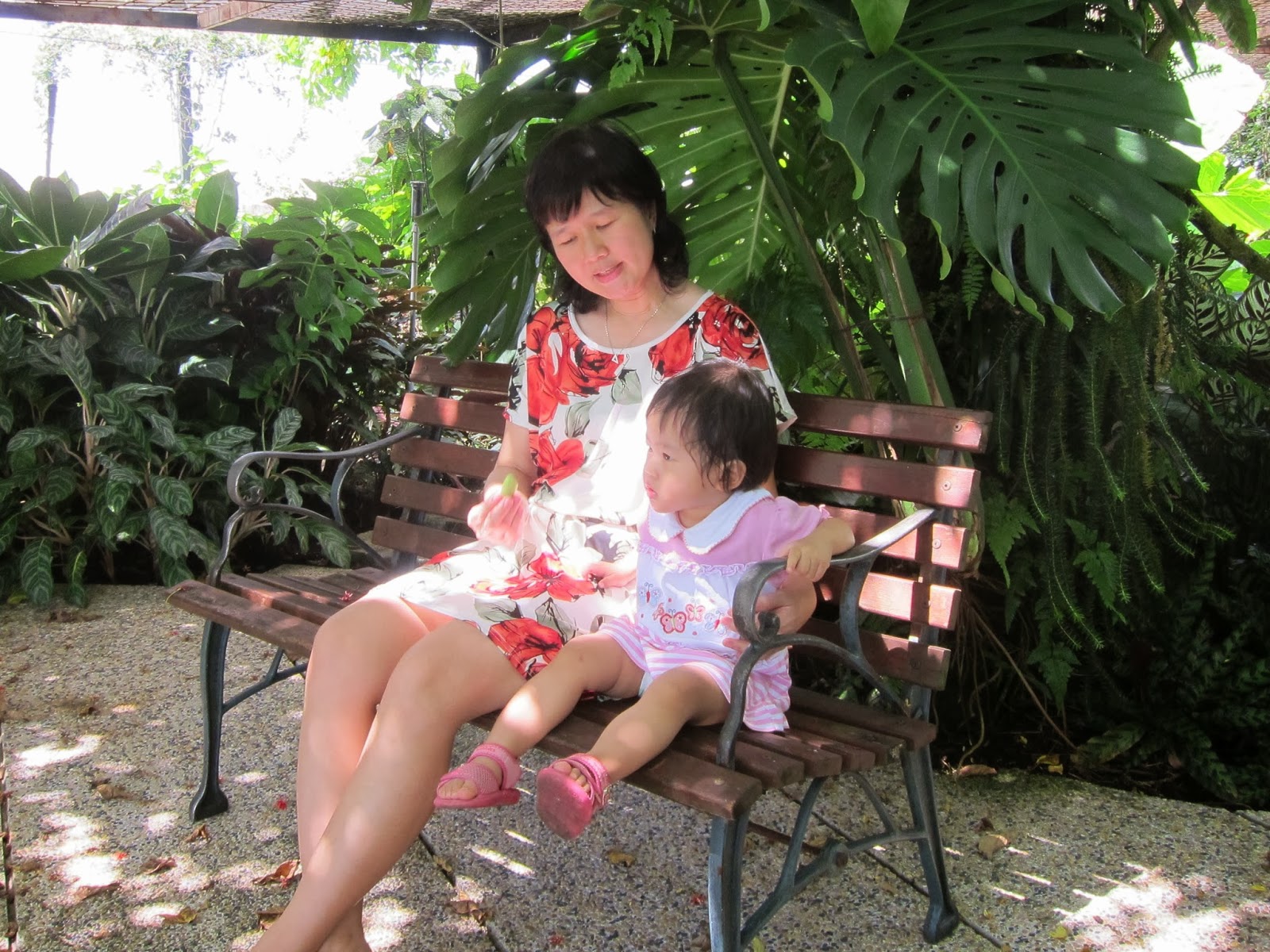 And a nice quiet moment with little SE

The sun was scorching hot, but being there wasn't too bad with the many shady plants around. It's a nice time-out from our CNY excesses of feasting, drinking and chatting. 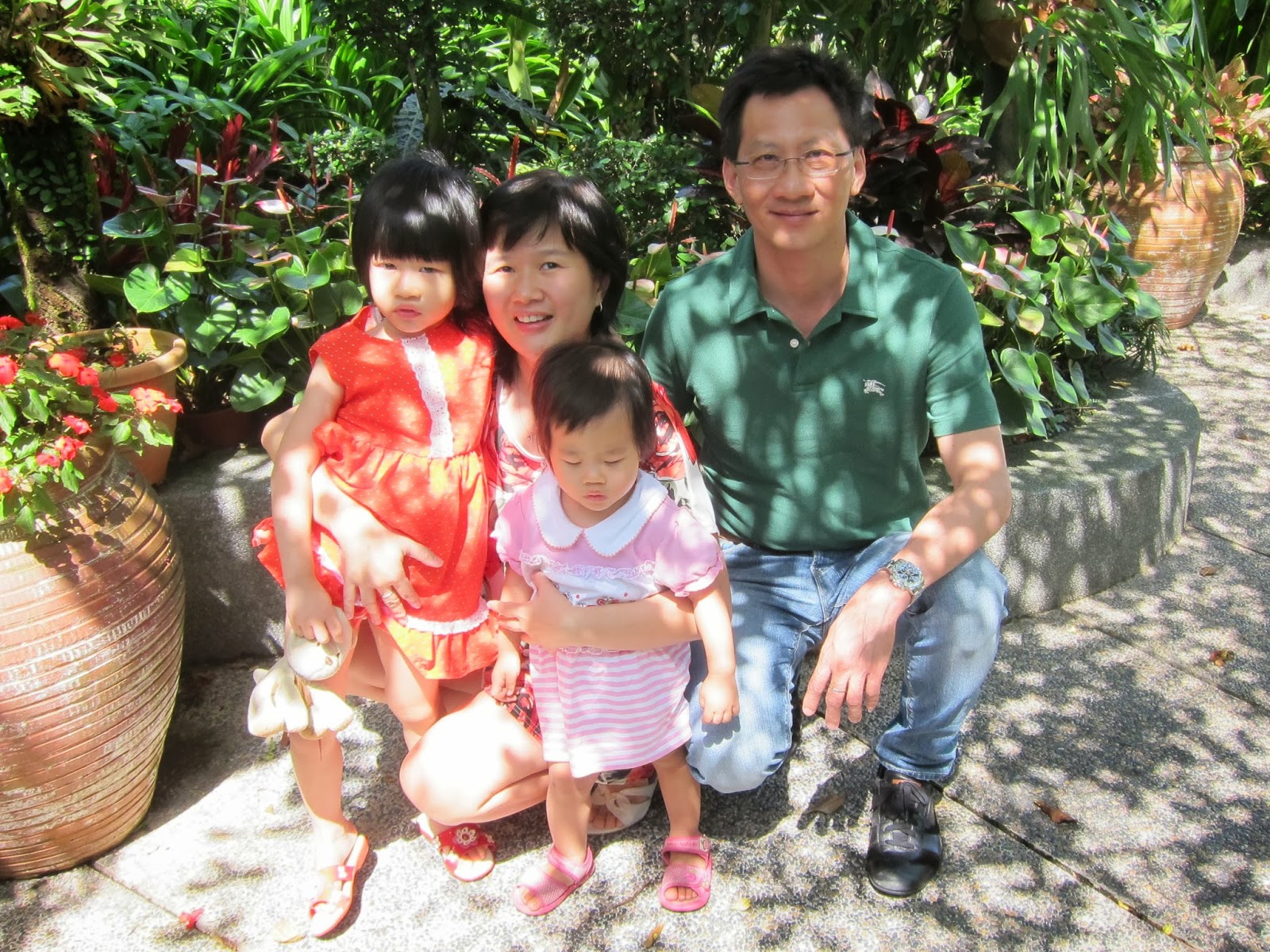 We are all wearing new clothes!

Just read back my CNY 2013 post and noted the part on planning to do more for CNY 2014. Heh the reality is... I did even LESS! I was busy at work and couldn't take leave. The preceeding few weekends were filled with something. Life with my 1-year-older girls remains busy. (Plus I was a bit lazy teehee.)

Reunion dinner was at my house as usual. Attendees were 9 adults and 3 toddlers. The menu:
1. Yee sang with extra salmon (pic taken before salmon was added)
2. 'Poon choy' from the famous shop LYJ
3. Stir-fried broccoli
4. Lotus root soup
5. Fried fish - contributed by guest
6. Leek with roast pork - contributed by guest
7. Lots of alcohol 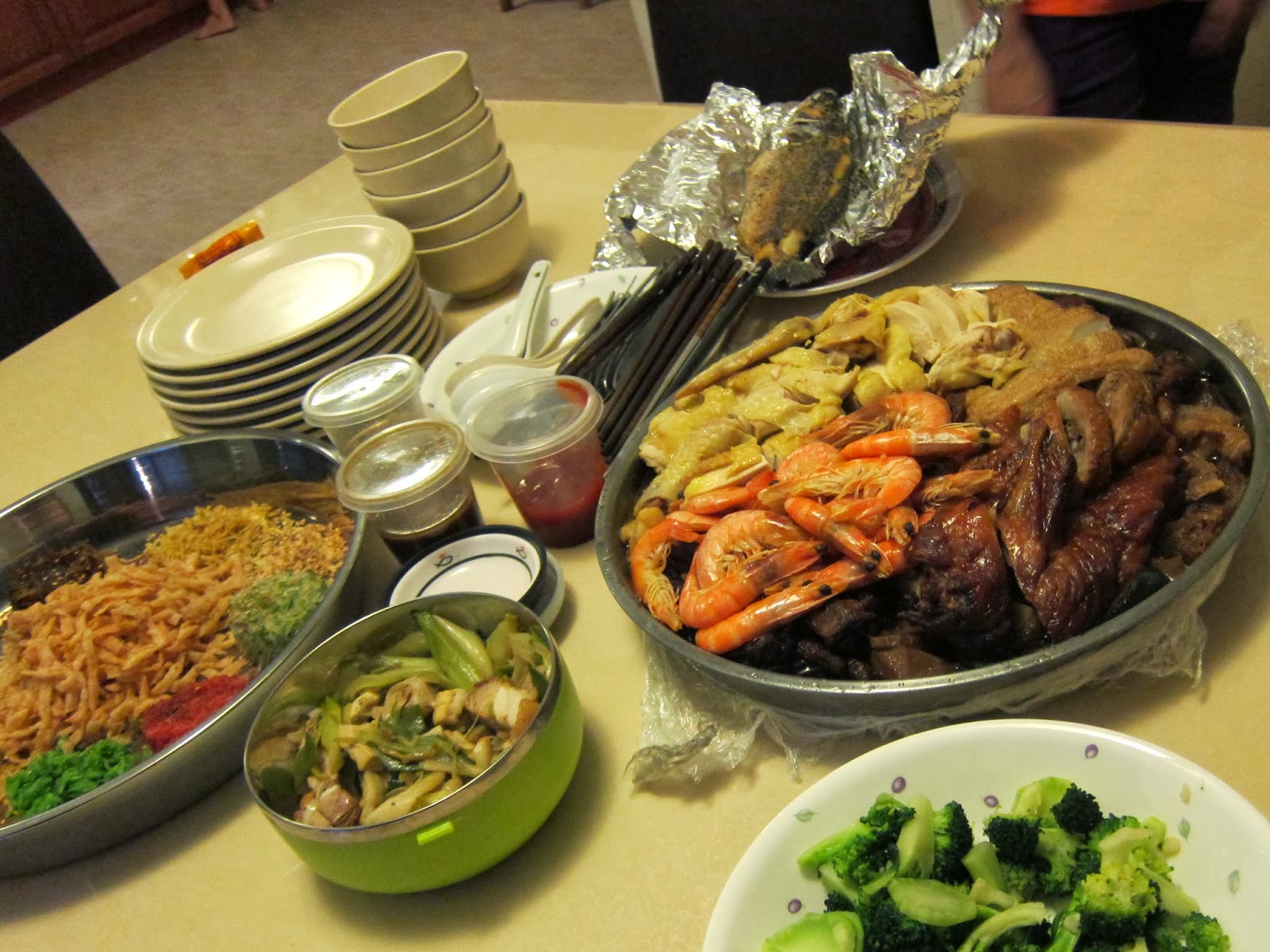 Hmm while this 'poon choy' was BIG (not that you'd notice from the photo. We only managed one-third of it that night), it didn't have luxury ingredients like abalone and sea cucumber. Hubby's family prizes such ingredients so guess we won't be getting this for CNY again. The prawns weren't fresh either.

The 1st day of CNY, we got into our new clothes and took pictures. Strangely enough, there are no activities on hubby's side of the family this day. So I took the opportunity to suggest going out to 1U's Secret Garden again (could be the start of our family tradition!). Had a sushi lunch at JE's request. 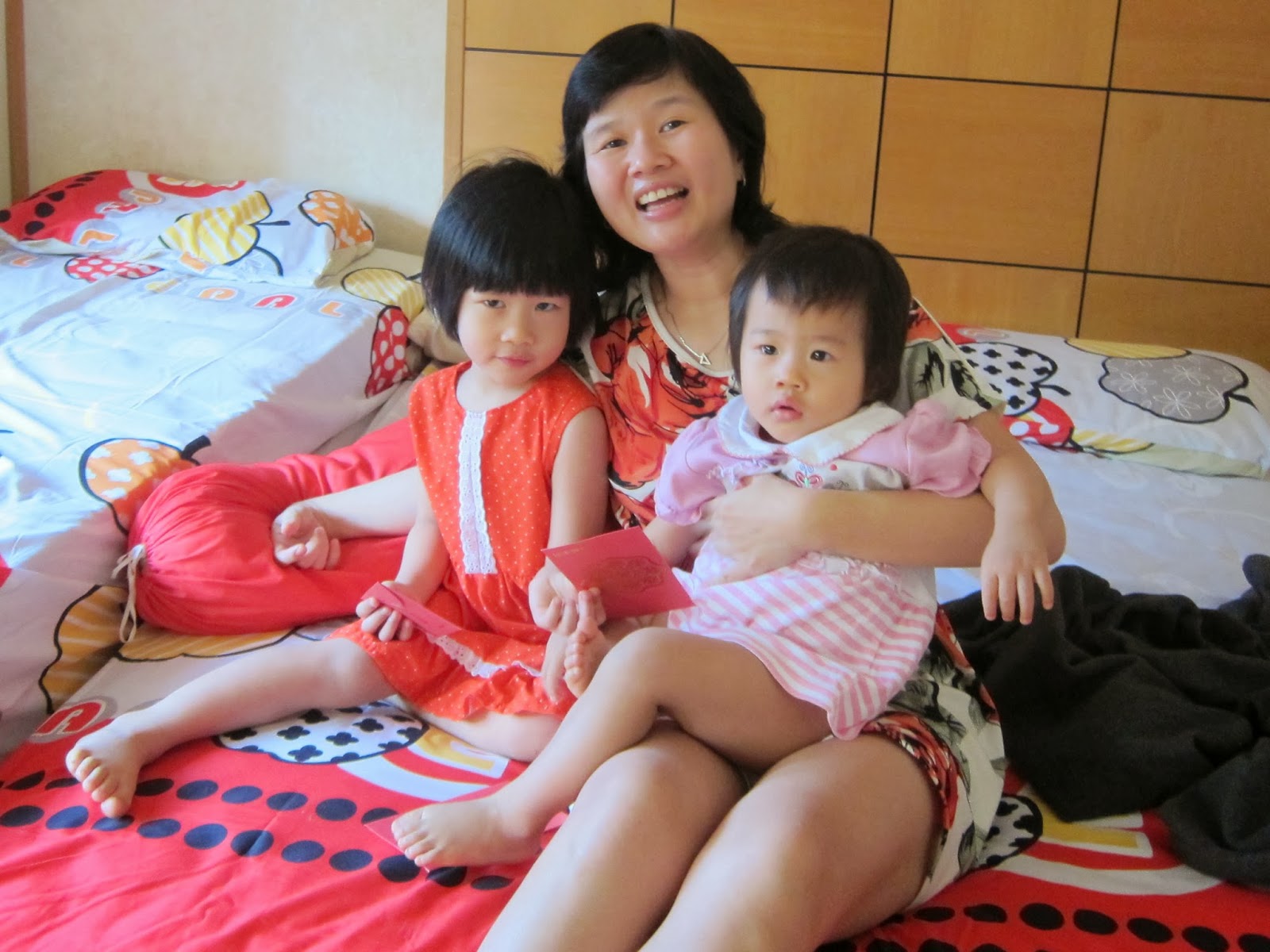 Me and my precious girls 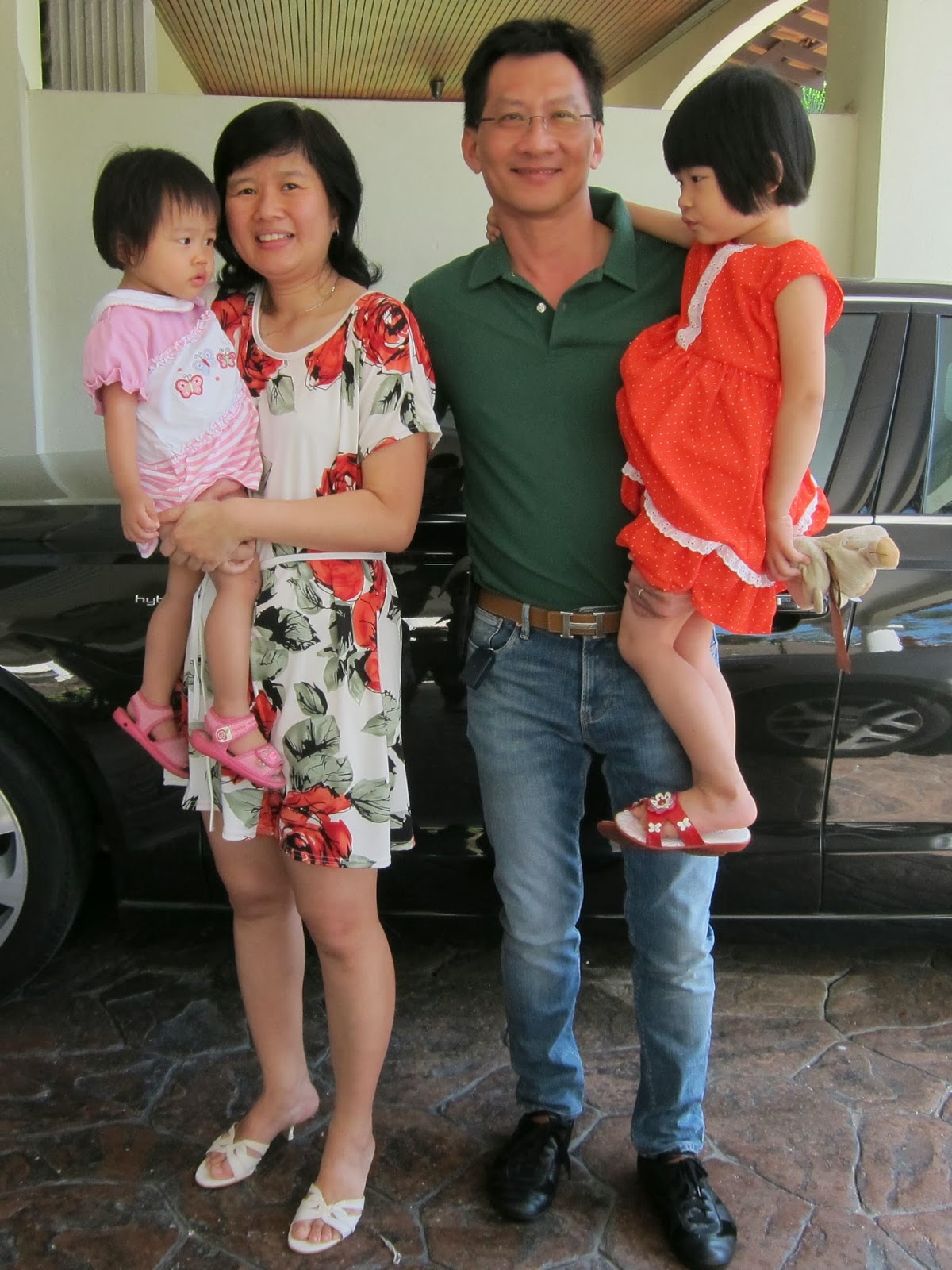 Dinner on Day1 was with hubby's side, as was lunch and dinner on Day2 and lunch on Day3. Hubby got roaring drunk at the session afterwards, sigh. Dinner was with my parents (had to cart hubby there where he ate some dinner and then went off to sleep. Carted him home again when it was time to go). After four meals with hubby's side, I must say it was nice to be with MY family! No offence meant to anyone hehe. 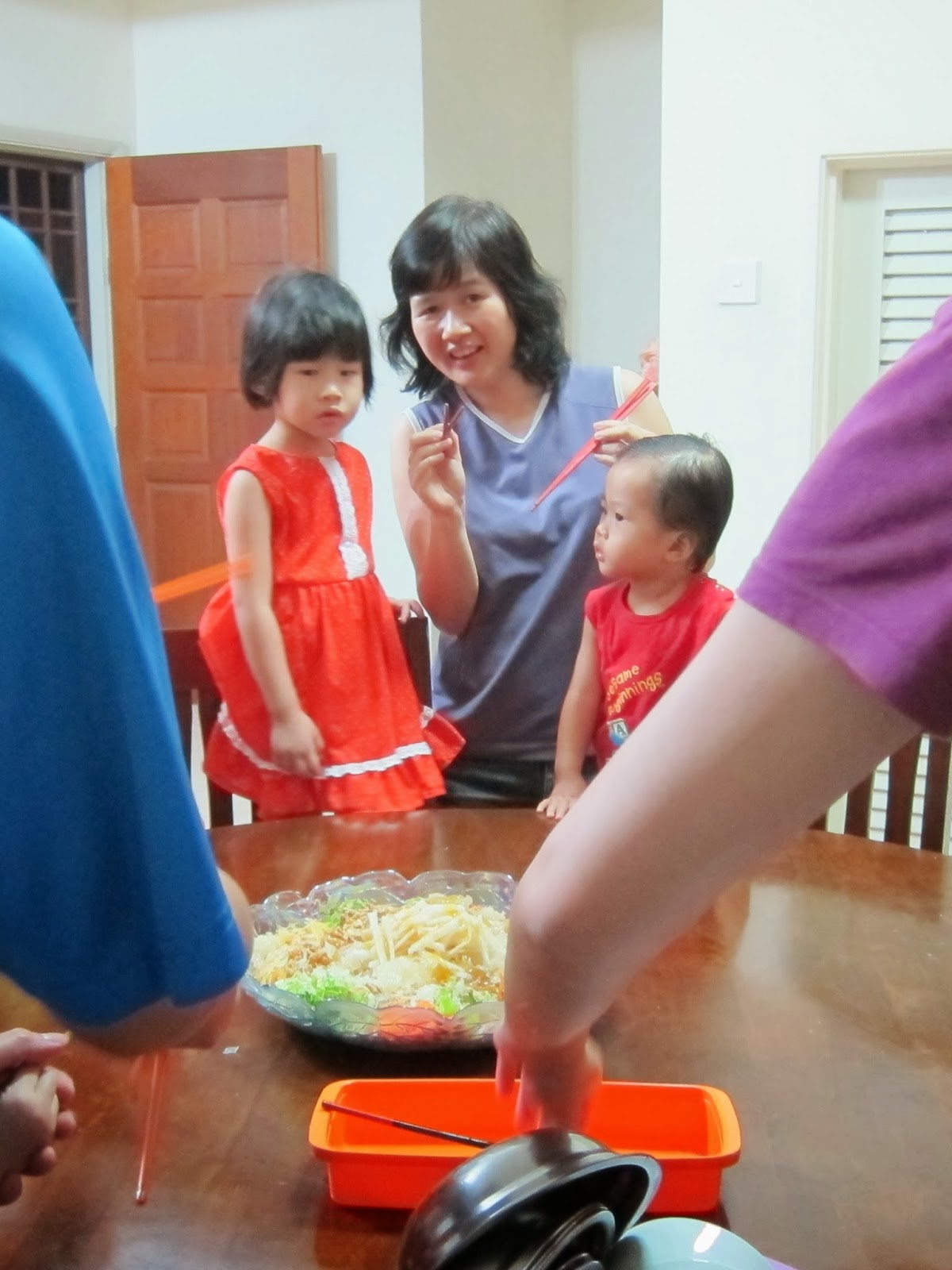 Let's plan our strategy on this yee sang