It all started when I wanted to buy a birthday present for my nephew Justin.  Not knowing what a 7yo would like, I asked and got the answer... Lego!  So I looked at Lego. After buying his present, I continued looking.  Then I bought one set, then another and another.  For my girls to play with next time. For now, all mine.  :) 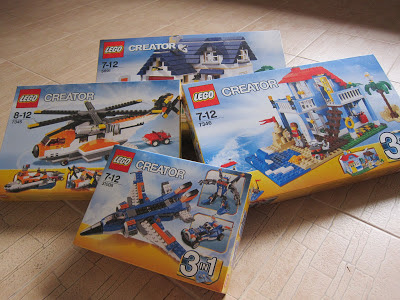 All mummy's! For now anyway.

The sets sat in the storeroom untouched for some time. Then one day I took annual leave and finally had time to open one set. It has been donkey's years since I'd built with Lego and I had fun, chuckling to myself occasionally.  One thing, I'd forgotten the pieces were so SMALL. Good thing my girls were at my parents' place - I happily spread everything on the floor without worrying anyone was going to eat a piece or put one in the nose.

2.5 hours later, my house was built. To my surprise, JE has been rather interested in it - opening the windows and doors, pushing the lawnmower around. Being a clumsy and inquisitive toddler though, she has to keep fiddling with parts and going 'Oh-oh!' when something inevitably dropped off. 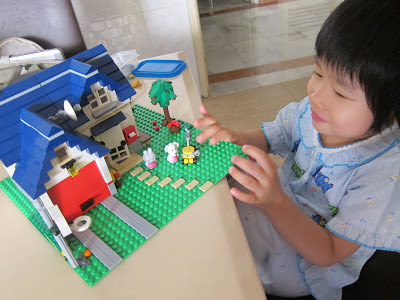 I enjoyed myself so much I opened up another box the next day and built a second house. 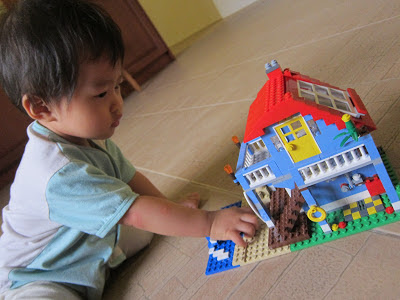 Mummy, this house for me ok?

Trying to stop myself from buying more Lego now hehe. I have only bought 2 more sets since the first pic.
Posted by Stacy at 8:47 PM 7 comments:

We attended two birthdays last weekend.  The first was for MIL, who turned 90 years old. I hardly mention this other grandmother of JE and SE even though we visit once a week and stay practically the whole day each time. She isn't a kid person. She addresses JE mainly to tell her not to play with things, not to go there, not to take this, not to touch that. Could a 3yo possibly sit with her arms at the side, for hours?  Luckily MIL speaks Cantonese and JE speaks only English for now, so most times JE doesn't understand her. I don't bother to translate, heh.  And I'm glad she's not the one taking care of my kids! 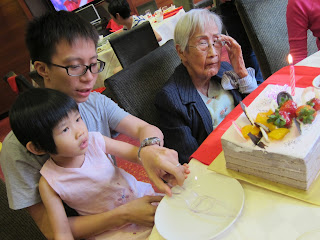 The second birthday celebration was for 2-year old Erin. That's an 88-year gap compared to our first birthday girl! 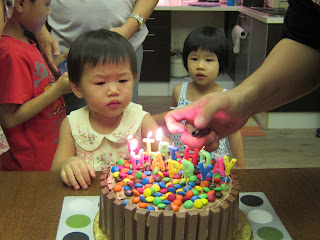 I made a point of taking photos of the cakes for JE.  She didn't want to take photos at MIL's do but condescended to take a photo together with the cake. She likes reciting who had what cake for their birthday. So this time Mah Mah had a yam cake and Erin an "Emm Emm" (M&M) cake.
Posted by Stacy at 11:43 PM 1 comment:

We have been out to the plant nurseries. Well actually a single nursery, the only one that specialises in desert roses. And most times, we come home with a full car load!  There will be plants, pots, soil and fertiliser bags. 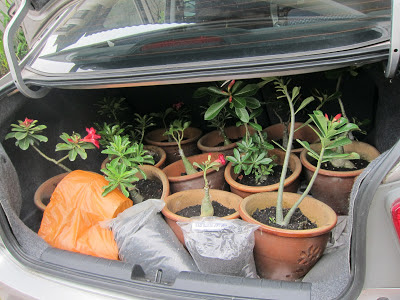 Heh, hubby doesn't do things by halves! But I admit it's quite fun looking for pretty flowers and deciding which ones to buy. And it's a change from going to the malls. JE gets to wander up and down the numerous plant aisles and SE gets to be carried the whole time, everyone's happy. 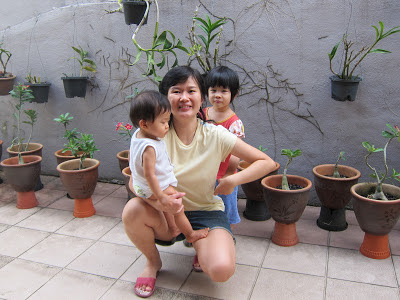 A selection of the blooms we have now: 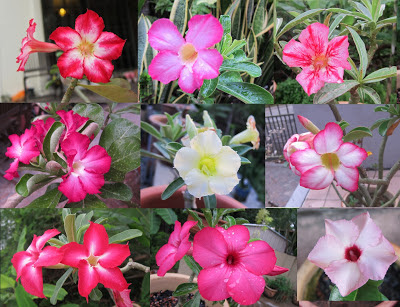 We have way more plants, but most are small and will take time to flower.  Not a cheap hobby... the smallest ones cost RM16 each, next size up (not very much bigger) RM25 and mid-sized ones are RM55.  There are very nice big plants with plenty of flowers but those are really expensive. Will just wait for these babies to grow!

(And yes, I do know the sap from these plants are toxic. Gotta watch the kids around them)
Posted by Stacy at 11:38 PM 2 comments:

Last weekend, SE didn't finish her baby food.  It's a first for this baby who has chomped down almost everything happily since she started solids. She clammed up and looked up or away when offered her food. When repeatedly offered the same thing, what happened was... 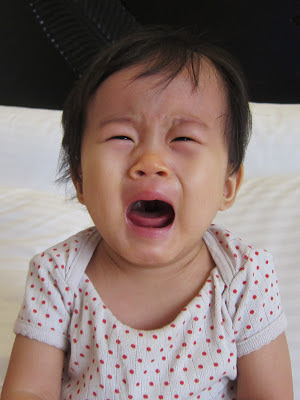 My food is not nice! 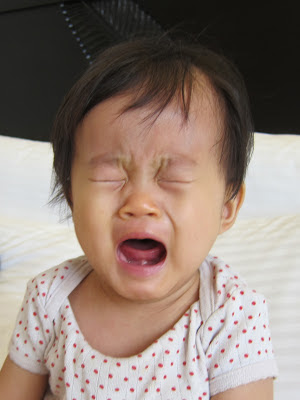 I cannot eat it! Take it away!

What could be the problem?  Maybe she's teething?  But baby food doesn't need chewing.  Maybe she's not well?  She has no fever and seems active as normal.  Maybe it's time to add seasoning to her food?  Or just maybe, the cause of the problem was something else... 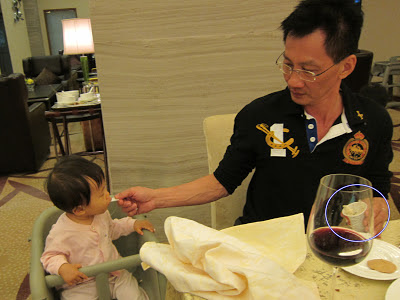 Hubby: Nah, papa give you something to eat

Notice what hubby is holding behind the wine glass (circled area). That is not her Avent container of baby food but... Haagen Dazs ice cream! 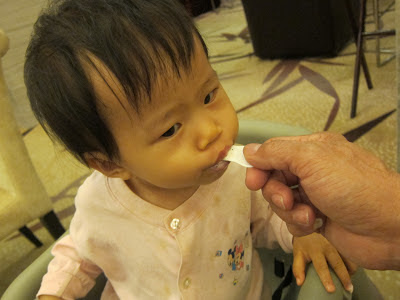 Heyyy, this is delicious. Mmm-mmmm 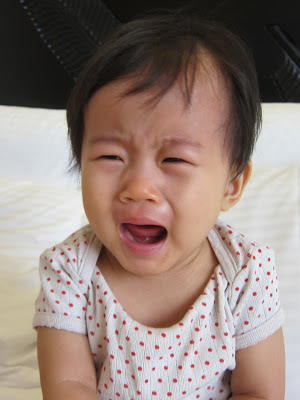 She didn't totally go hungry.  At dinner she pulled apart our potato wedges and spread them on the table. Then she started putting them in her mouth. After a while I noticed there really wasn't much potato on the table, even piecing together the dismembered parts. Wedges are pretty salty and I suppose they met her newly-elevated standards!  Need I start adding seasoning to her food?  Will wait and see how the next few meals are received.
Posted by Stacy at 7:11 PM 7 comments: 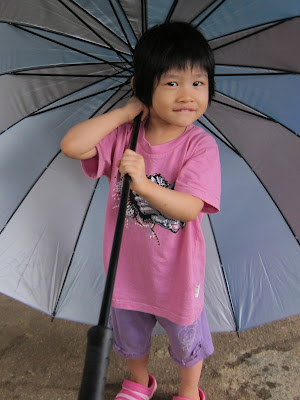 RaindropS keep falling on my head...

JE had a pronounced lisp when she started talking.  She'd say 'in-chide/out-chide/back-chide' for inside/outside/backside.  She'd ask for 'chup' instead of soup and 'choy chosh' instead of soy sauce (not that she gets this one).  It could be hard to understand her when she was making a sentence which happened to include a lot of the letter 'S'.  Like, 'Thee chaw-chage ee chawty' for This sausage is salty.

When my father had a knee problem and had to inch slowly upstairs, she informed me, 'Jo Ern walk fah-fah, Ah Kong walk cho-cho' (JE walk fast-fast, Ah Kong walk slow-slow).  And SE has been 'Chu Ern' since she was born!

It was hard to teach her new words when she couldn't differentiate 'S' from 'F' from 'CH'.  So it's a good thing that her 'S's are in.  They crept in slowly without us doing anything. Phew! 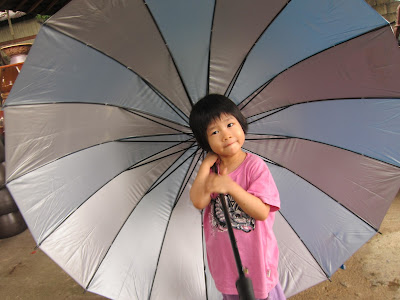 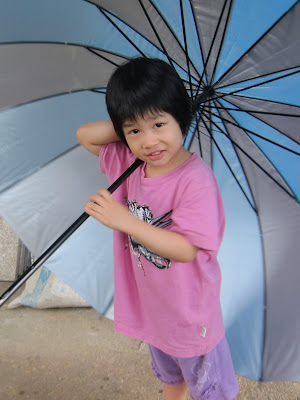 Took Su Ern to the paedi for jabs last weekend.  When JE was this age, we'd already brought her to the doctor 4 times... the first as we were worried that she wasn't drinking milk, the second (picked up useful info on dealing with fever in kids) and third for a fever, the fourth for fever again.  Partly because SE didn't get sick as much and partly because we learnt from experience with JE. 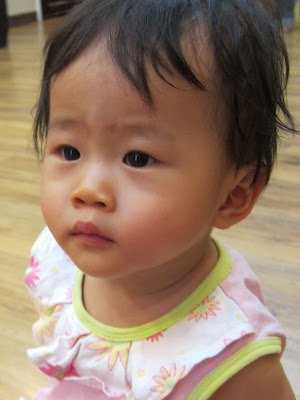 What is the doctor going to do to me?

She had the 4-in-1 jab for measles, mumps, rubella and chicken pox. The nurse distracted her with a toy and she didn't even flinch when the jab went in!

Paedi said she looked yellow. It's not jaundice - she said when you see beautiful whites in the eyes, it can't be. :)  It's just mummy going overboard with coloured foods again - pumpkin, sweet potato, beet and carrot. Paedi said that's actually fine, but I think I'll scale down a bit. Don't want my poor SE going around looking like a yellow teletubby. Heh.

Her weight at 8.5kg is below average though.  All right then, looks like it's time to start pumping up little SE!  I've been very focused on stuffing more calories into JE. That takes time as JE doesn't like eating very much and will run away/cry/adopt funny postures which doesn't give access to her mouth.  But SE... this one does like to eat. 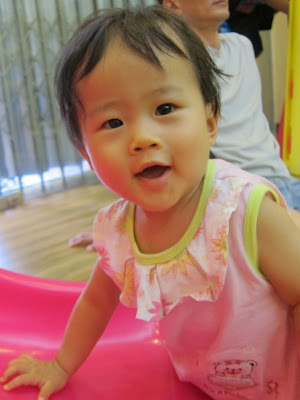 
All right then... let's get to work... *rubs hands together*. Last weekend I gave her cheese, egg, bread-sticks, cornflakes and organic puffs as snacks.  All were happily finished. :) I have teeth already! OK, one tooth. Still counts.

Oh, and she's no longer toothless. One finally came out at the bottom!

JE is rather a crybaby these days.  Any little thing sets her off, numerous times throughout a day. 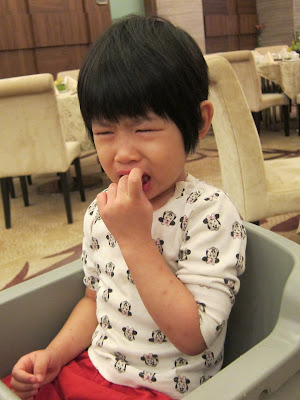 When in Genting recently, she was playing in the playground set. A smaller girl came up to play with the same thing and JE started crying. Sigh. 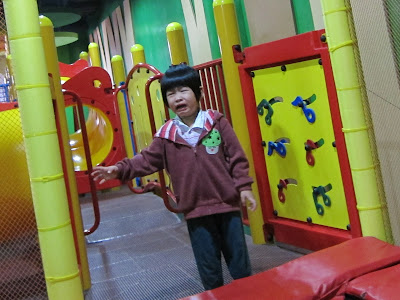 Often it's followed by "Pa-paaaa! Pa-paaaaa!"  It was always 'Mummyyy!' before. I wonder, when did I stop being the centre of her universe?  And how did it happen? On the bright side, hubby is the one who has to console her. But I'm still a little sad.

Things have to be placed high up in my house. Got one little busybody. 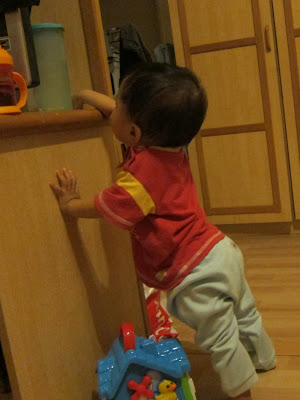 What's this up here? Let me check.

The other girl? Can reach even higher these days by dragging furniture wherever she wants. 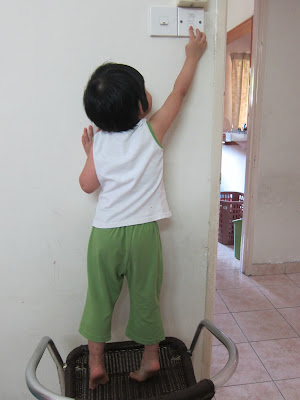 Sigh. Fast running out of high horizontal space.
Posted by Stacy at 7:57 PM No comments: