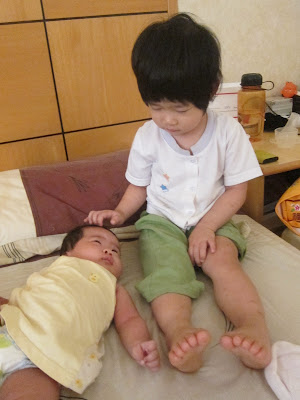 During my confinement month at my parent's place, JE mentioned going home 'with Papa and Mummy. Baby tee-ter al-cho'. At least she didn't expect SE to be left behind!

So far, Jo Ern has been good with her "baby tee-ter", whom she calls "Chu Ern". I was in the bathroom last week and heard SE start to bawl. I was afraid she would wake JE up and hurried through my morning toilet. When I came out, JE HAD woken up. And gone over to SE, squatted beside her and was busy patting her tummy to comfort her. :)

I told JE that next time SE will play with her and she can teach SE to do things. Now when I bring SE over when she plays with her toys, she says "Chu Ern yoookk (look)! This one can turn" and "Chu Ern yoook! Put like this". I think this one might be a good big sister!

JE: Mummy! MUMMY!!
Me: What?
JE: Tongue (sticks out tongue and points to it) 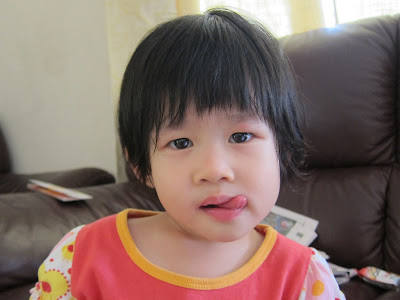 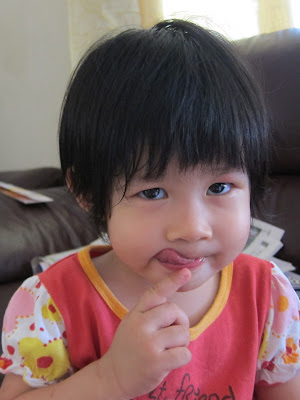 This one started way before Su Ern's arrival. :)

When I started my confinement for Su Ern, I was thinking of my confinement with Jo Ern 2 years ago. Cousin Elyssa then was 2yo as well and she could talk way more than JE.  But suddenly, in the space of that one month, JE's verbal skills improved by leaps and bounds. Going into the month, she was only stringing a few words together. Coming out, she was quite the chatterbox!

Now I can't talk over her head any more. She repeats what people say, often not quite correctly. She doesn't mind repeating herself and asking for attention endlessly. She's really entertaining when I am free. But can be rather annoying when I'm trying to get something done! 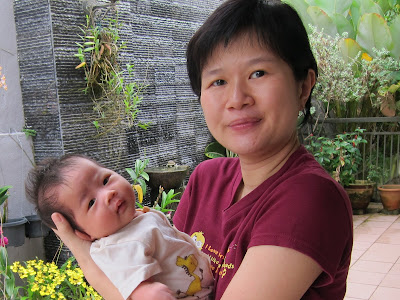 Mummy, I think it's time for my milk

There are a few things I'm glad not to have to go through any more.

1. Being pregnant. I can drink tea now without it leaving a bitter aftertaste. I can stand against a sink/counter without having to turn sideways. I can wear normal clothes instead of cycling through limited pieces of maternity wear. Yay!
2. Parceling out time into 2-hour chunks. I can hardly believe when it's time to feed her AGAIN.
3. Pacing up and down trying to lull baby to sleep while bleary-eyed from lack of it myself
4. To a lesser extent, putting things on hold. We took Jo Ern to Singapore, Phuket and Hanoi. I was pregnant during the latter 2 trips and was feeling tired and queasy. Stopped overseas holidays after that. We did go for a domestic trip to Ipoh but I associate queasiness with that too. Now I'm looking forward to resuming going for holidays!

When I cuddle Su Ern, she feels so soft and warm in my arms. Everything about her is tiny yet perfect. And when she makes her little snuffly, grunty baby noises, I am a bit sad that she will be my last baby. After the years of longing for a child though, I am thankful to be experiencing motherhood. And not just once but twice over.
Posted by Stacy at 8:45 PM 5 comments: 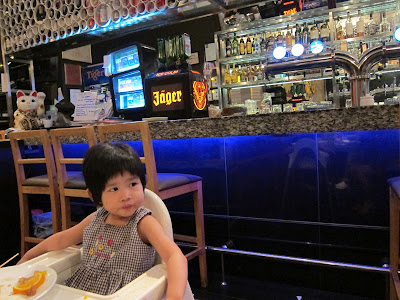 This is different from the other places Papa and Mummy take me... 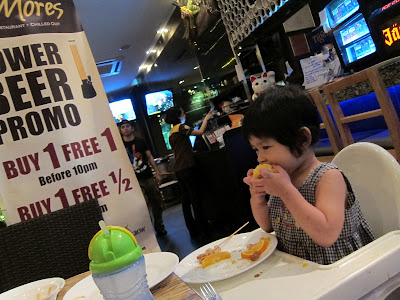 The food is ok though

Somehow we ended up taking Jo Ern to a bar last night. :) To start from the beginning, I bought an online coupon a while ago. The deal was completely oversold - luckily the bar/restaurant honoured the deal by opening up more slots for coupon redemption. So while I'd planned to go well before Su Ern's delivery, the first available slot was way after. Going with 2 kids and without maid would be a challenge. What to do, I'was quite determined not to waste my money. Worst case we could eat real fast and hightail it home haha.

Last minute hubby suggested we leave Su Ern home with the maid. Previously we would never have done that with Jo Ern! Well this maid has proven to be reliable, there was someone else at home in case of emergencies and we wouldn't be gone all that long.

So off we went. The place was definitely a drinking venue, one with a BBQ buffet. There were no other kids in the whole place. It was a good thing we didn't bring a 1-month-old as well as a 2-year-old!! Actually I did ask for a baby chair when making the reservation and they were available, so it's not that bad lah.

I had a margarita, hubby had a couple of draught stout, Jo Ern dipped everything in mushroom sauce and we all had a good time. :)

We came back home on Wednesday afternoon after a trip to Tesco to stock up on groceries. It was a full car load - 3 adults, a toddler and a baby. Stuffed everywhere were groceries, baby equipment, frozen milk, clothes and everything else brought for the one-month stay at my parents' place.

Got home and faced the daunting task of unpacking, cleaning our long-neglected house, changing bedsheets, getting toddler and baby settled in, feeding baby on a 2-hour schedule, putting away groceries, getting dinner ready. Hubby neglected to mention earlier that he had a dinner appointment. Oo-kay. I shifted to Capable mode and multi-tasked. Wasn't easy... Jo Ern alone was a handful. She was excited at coming home and was very active - asking questions, climbing everywhere, requesting to play things/eat things/do this/do that the whole evening and night. Su Ern wasn't used to the new environment, cried and had to be carried a lot. Even with the help of the maid, I was exhausted by bed-time!

Bed-time (this time without maid) was another challenge. JE couldn't sleep, SE kept screaming. I carried SE around the room and JE followed me around. I tried to keep SE quiet by feeding her, JE got up to see what I was doing. She was actually very tired. She requested help at one stage... 'Mummy, need pat-pat'. Poor girl! It was over an hour before lights were finally out at 11pm. Phew.

Luckily I was in Capable mode. It was like being at work - "Deal with crisis A, ok do this with crisis B, crisis C can still wait, now how are we doing on crisis A etc". Me in Whiney mode would have been "Lousy hubby went out to enjoy himself and left me with all the work! And maybe cry angry tears". Heh. *proud of myself for handling situation*

OK Thursday hubby only came back past midnight. I had been trying to get the girls to settle down for two hours without success. It was 2.30am before everyone got to sleep. This time I shifted to Whiny mode. Heh. 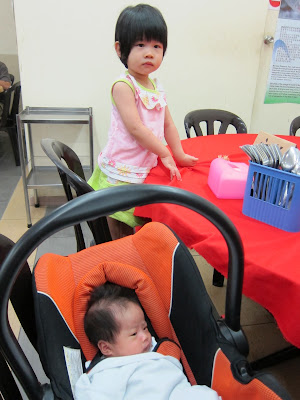 We may be small but we can be a handful!

Su Ern is one month old already! How time does fly! 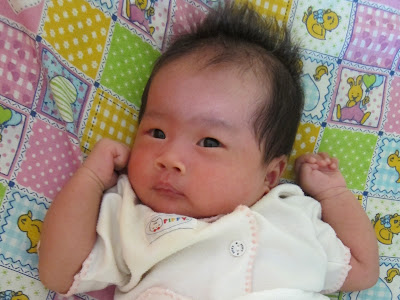 Feeding
Milk intake quantity is fine so far. For the first 3 weeks she had EBM. She couldn't latch on properly, and somehow I would get pains (uterine contractions?) while trying to breastfeed. Was easier on both of us for me to pump and her to have a bottle! She was also sleeping A LOT then and expecting her to WORK for milk would be too much.

At 3 weeks, I tried feeding direct again and was surprised when she managed it. But unlike Jo Ern who would continuously suckle and suckle, Su Ern drops off after 5 mins. Then she would stretch, wriggle, fart, wrinkle her nose in distaste, stretch some more, fart again. Sigh. Now I'm playing it by ear. If she has very little for a few feeds in a row, I pump and give her EBM. Hopefully we get a workable routine down by the time I start work.

Sleeping
Although she is awake more now, she still sleeps a lot. She can be fast asleep a whole morning, afternoon and evening. Sometimes she also sleeps the whole night after that.

Lung power
Has strong lungs. The first time she screamed, everyone was surprised at the volume pouring out from this tiny creature! Jo Ern by comparison doesn't have a loud voice at all.

Mosquito bait
Like Jo Ern, attracts mosquitos. Poor kid has red marks all over her face at the moment. Today her shirt rode up a bit and shortly after, there was a mosquito bite on the small area of tummy exposed.

The back end
Is extremely fussy about diaper cleanliness. While Jo Ern couldn't be bothered, this one cries whenever her diaper is dirty. She poos often and pees often too, so diaper/nappy turnover is high. Heh.

Overall she ranks as easy to care for. The only harder part is feeding - pumping then feeding is double work. At times she cries while I'm pumping, and since I can't get to her I just have to hope someome is available to check her diaper or carry her a while.

So far we have been staying at my parents' place. We return home soon, will see how things go then! 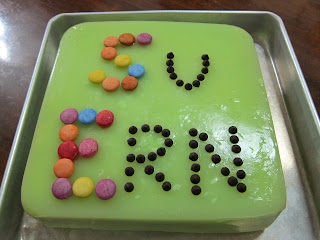 Cake baked by my sis for Su Ern's full moon.

Thought it was time to post something about Su Ern, then saw these kiddos at play this morning. So post these pics first, heh. I came out of the house to see them carrying their shoes around like this... 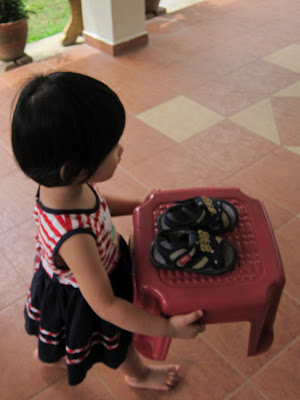 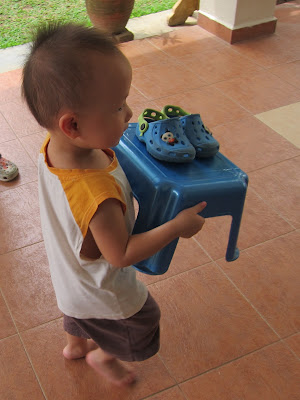 '
And there goes another... 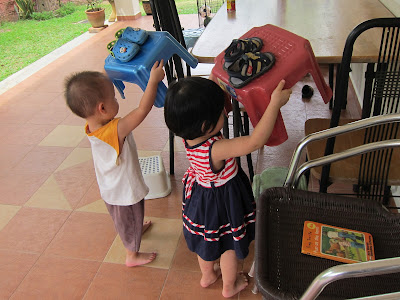 What on EARTH they are doing I have no idea!!


These days Jo Ern requests to "watch TV" morning, day and night. That's to put on one of the kiddy CDs - Barney, Smurfs, Rupert etc. Luckily she doesn't watch too long before going off to do something else.

I much prefer her to do such things (whatever this particular game is!) than watching TV. 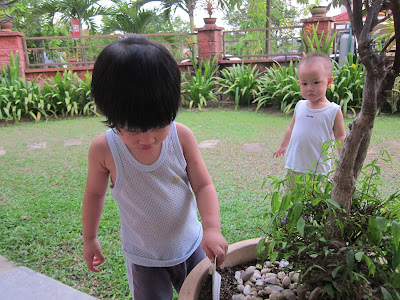 What are you doing, Ern? 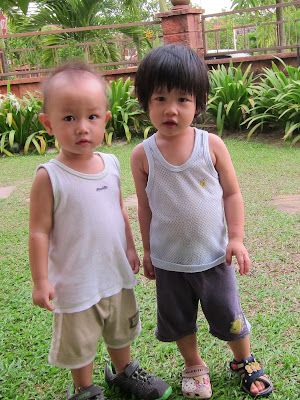 Let's take a picture together, k?

I am thrilled with the last photo. This is the very first time both kiddos have willingly posed for a photo. Hopefully no more battles whenever the camera is out... where I want to take photos and Jo Ern wants to grab the camera and see old photos!

These cousins were born exactly 2 weeks apart. My mum says they're the best of friends and also the worst of enemies. :)
Posted by Stacy at 2:51 AM 5 comments: