JE remains hard to feed.  She roams all over during mealtimes, flops on her tummy or lies down on her chair, etc etc. Exasperated one day during such a session, I told her:

Me: Next time when Mummy is old, you must feed Mummy ok?
JE: *slight pause*
JE: Ah Mah and Ah Kong old already har, they can eat by themselves. So next time you old har, you can also eat by yourself. 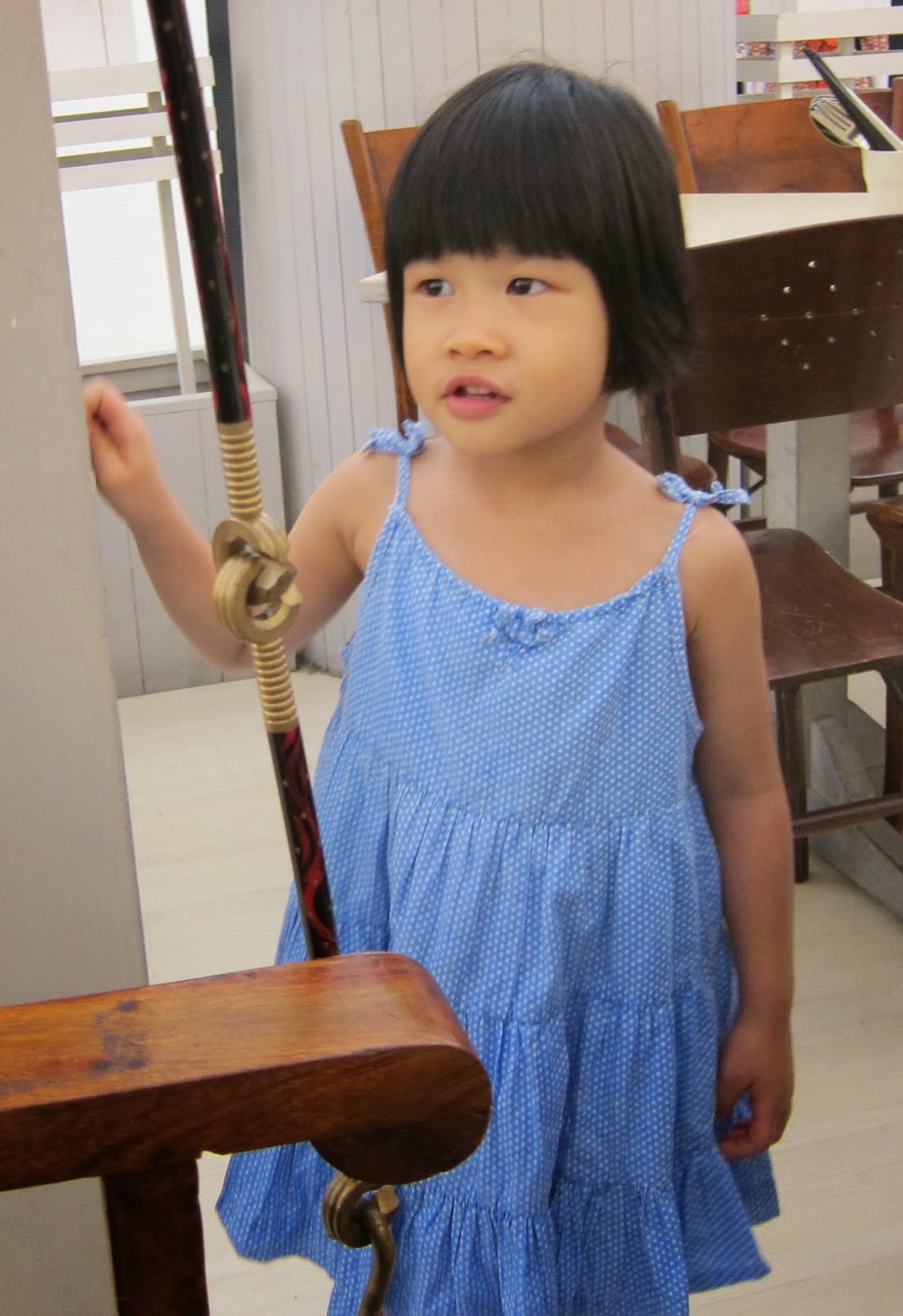 Why this Mummy ask me to feed her...

Heh heh.  OK I also hope I never get so old that I need to be spoon-fed!

We've been going out to the plant nurseries again. :)  Hubby wanted to get nice plants for CNY and me, I like plants!  The girls... well, one of them is more enthusiastic than the other. 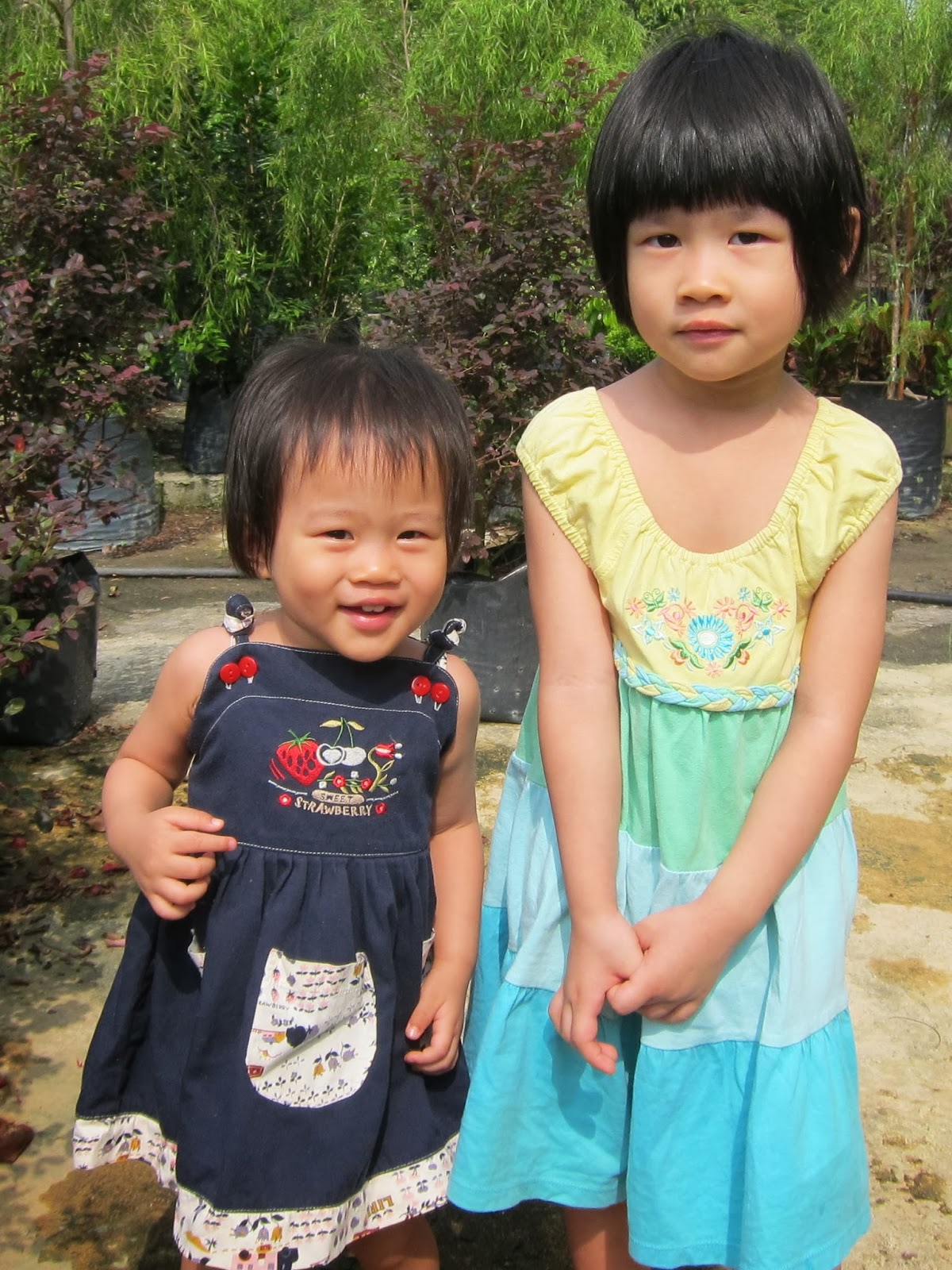 Part of our recent loot: 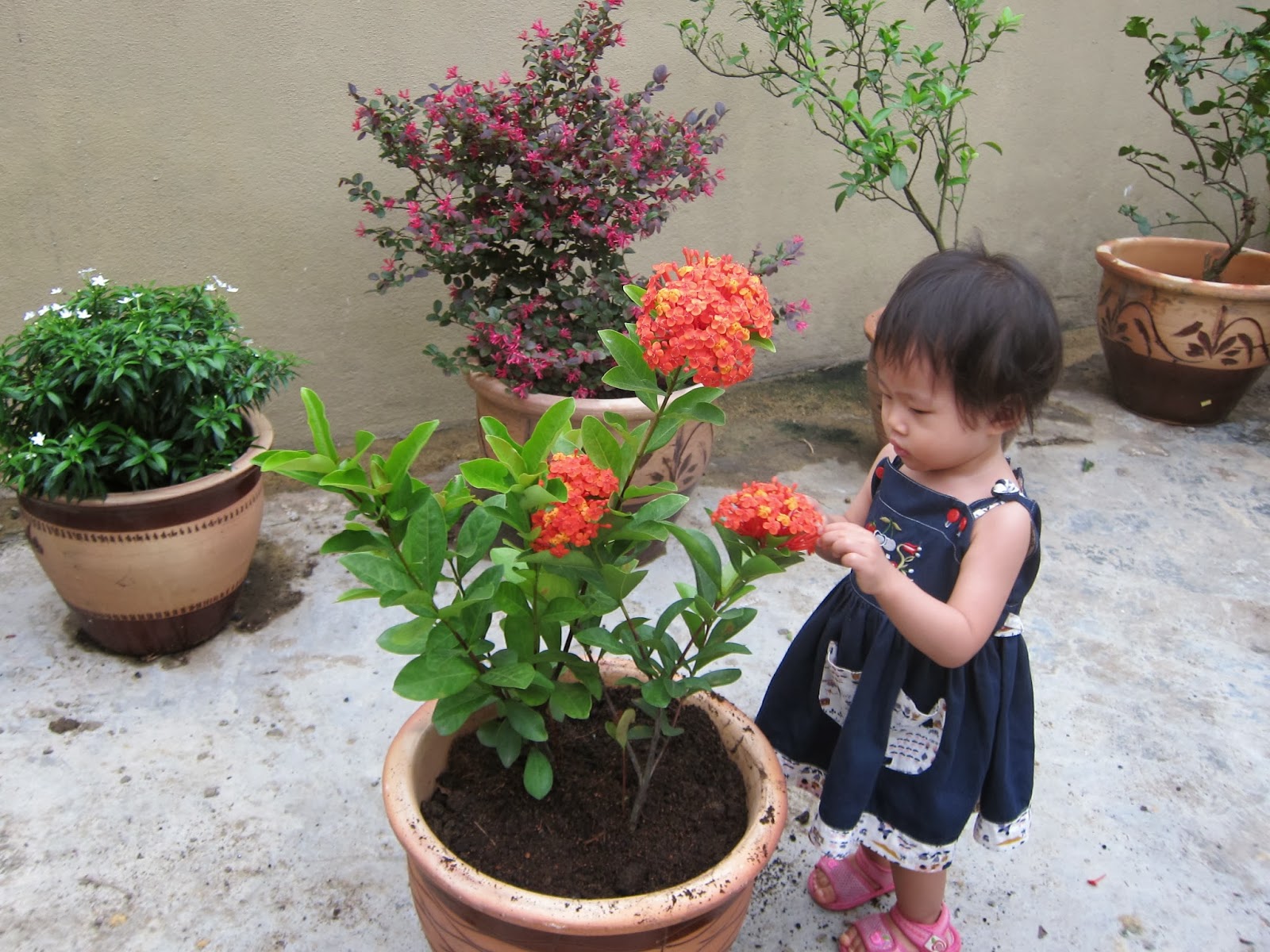 I do like the look of these tiered lime plants. They didn't have price tags (probably all sold) but I'm sure one would burn a big hole in my pocket! 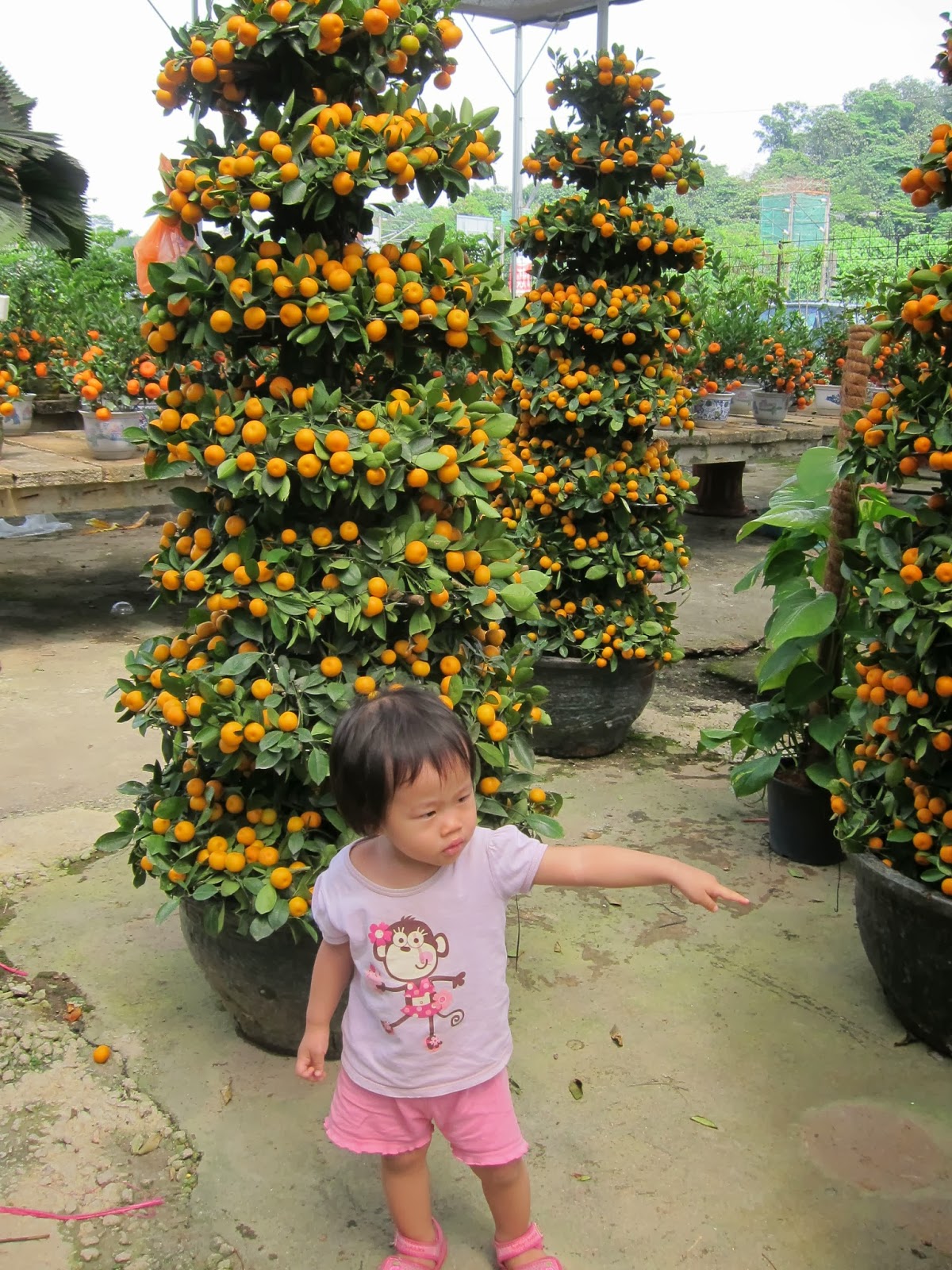 I'll take this one and that one

Halfway through one trip, JE was complaining she wanted to go home already. To watch TV. Aiyo. This one is following the footsteps of TV addict hubby... 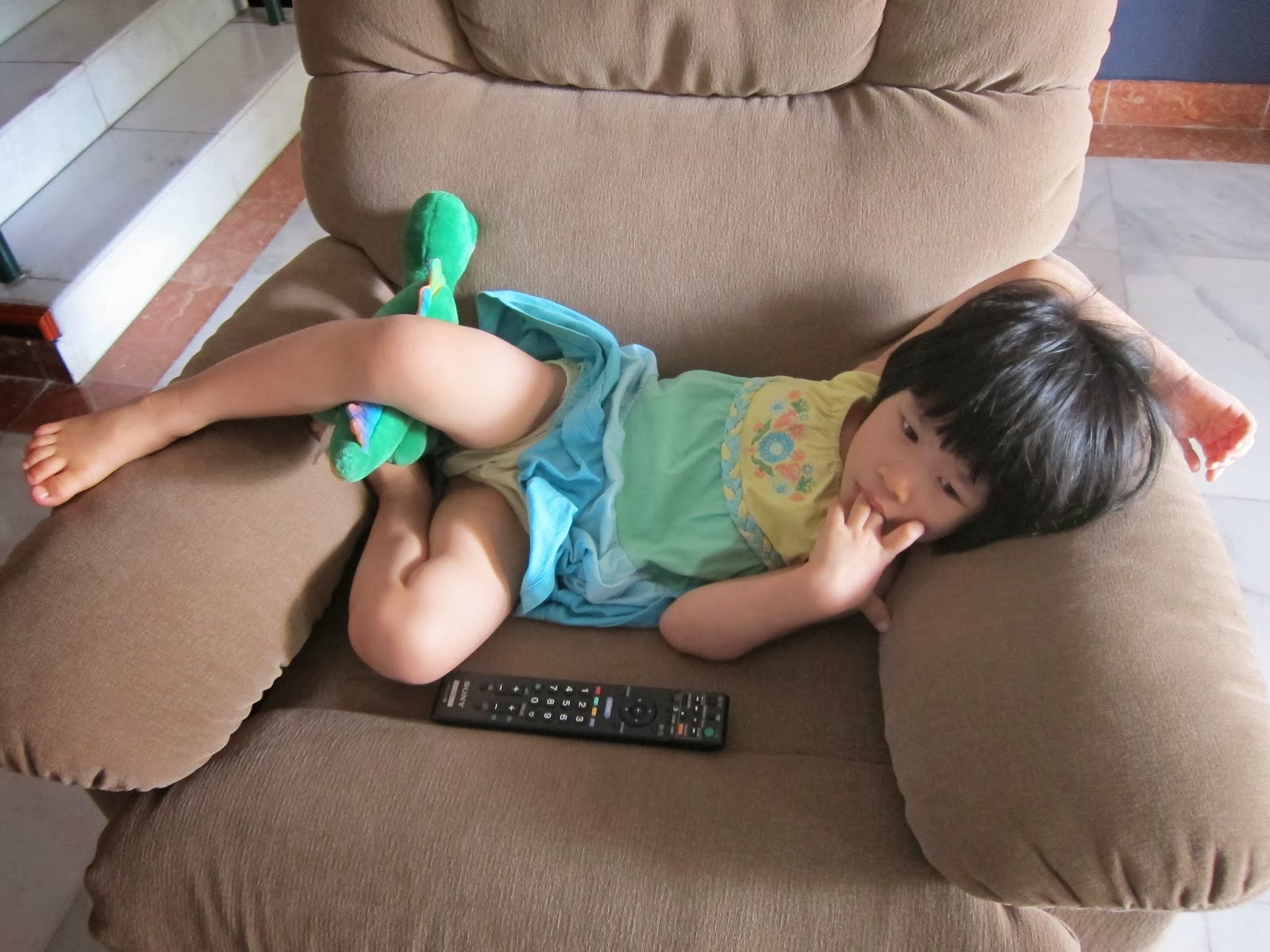 Now THIS is a better way to spend time

I must get her away from the TV more often!
Posted by Stacy at 5:49 AM 3 comments:

This day seemed so far not so long ago... but SE is sleeping through the night now!  She was waking up twice every night for milk.  My problem is, it's hard for me to fall asleep once I'm awake. So I was pretty sleep-deprived!  I didn't dare take afternoon naps on weekends either for fear it'd be even harder to sleep that night. 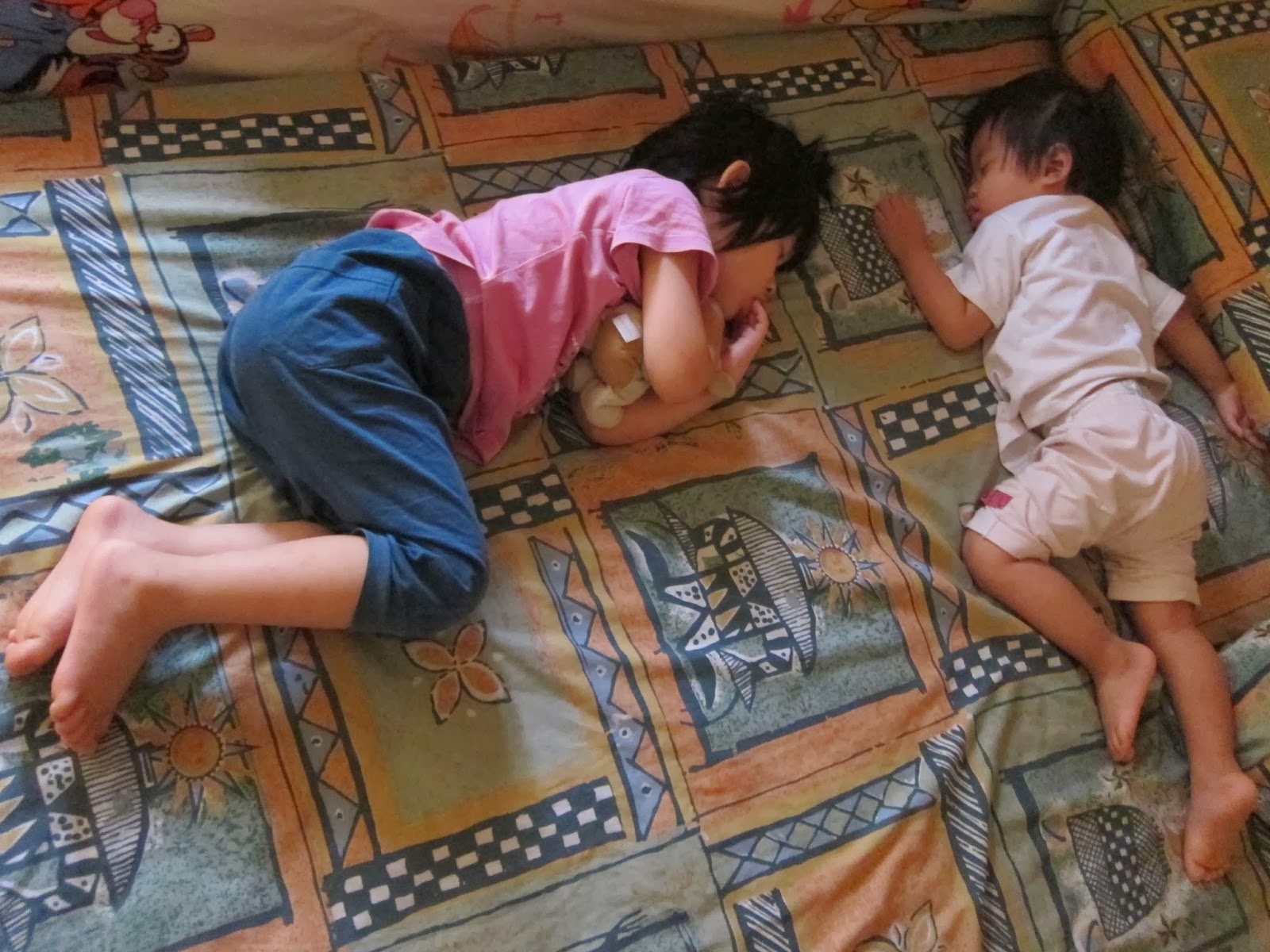 And because she does STTN... I could stop breastfeeding. :)  I stopped pumping and it was just cold turkey. She didn't ask to nurse that day nor the few days after, and after that I just told her 'no milk'! With JE, I stopped pumping but continued direct nursing for another 2 months.

So now I can sleep through the night and don't have to go off twice a day to pump milk. Very soon I can stop making 2-3 rounds of baby food weekly too.  Wow I'd have so much time to myself! Heh heh.
Posted by Stacy at 5:34 PM 2 comments:

JE goes gaga over lollipops. My lifesaver: mini-Chupa Chups! The size is half the usual and she still gets 'a lollipop'.

Anyway, got her to take a picture with these. This kid shies away the moment I take out the camera. Either she runs off or she will pose very reluctantly - shaking something, sticking out her tongue, looking away... sigh. You'd think she'd have gotten used to mamarazzi by now since I've been constantly taking pictures of her since birth! 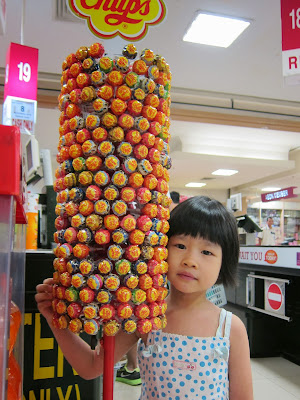 Back to the subject of food, she is still super hard to feed. What kid takes two spoons of ice-cream and doesn't want any more? Two sips of Ribena and says she's had enough?  During ONE typical dinner-time these days, she will have to go off once to pee, another time to poo and will complain of stomach ache (necessitating the rubbing of oil on her tummy).  I have a dose of deworming medicine ready for her heh.
Posted by Stacy at 8:46 PM 1 comment:

Balloon from a professional

Hubby is pretty good at making balloon sculptures now. I should take more pictures... only have those of creations here and here. But if we encounter a clown making balloons, JE still wants to stand in line for that. Well if the queue isn't too long, why not.

So we waited for this clown one day. When it was her turn, the clown asked her what she wanted. And she replied, SAUSAGE. Even the clown grinned. He was nice enough to make her a flower balloon. Handed it to her and no, she didn't want it. So he made her a sausage instead.

And everyone was happy. 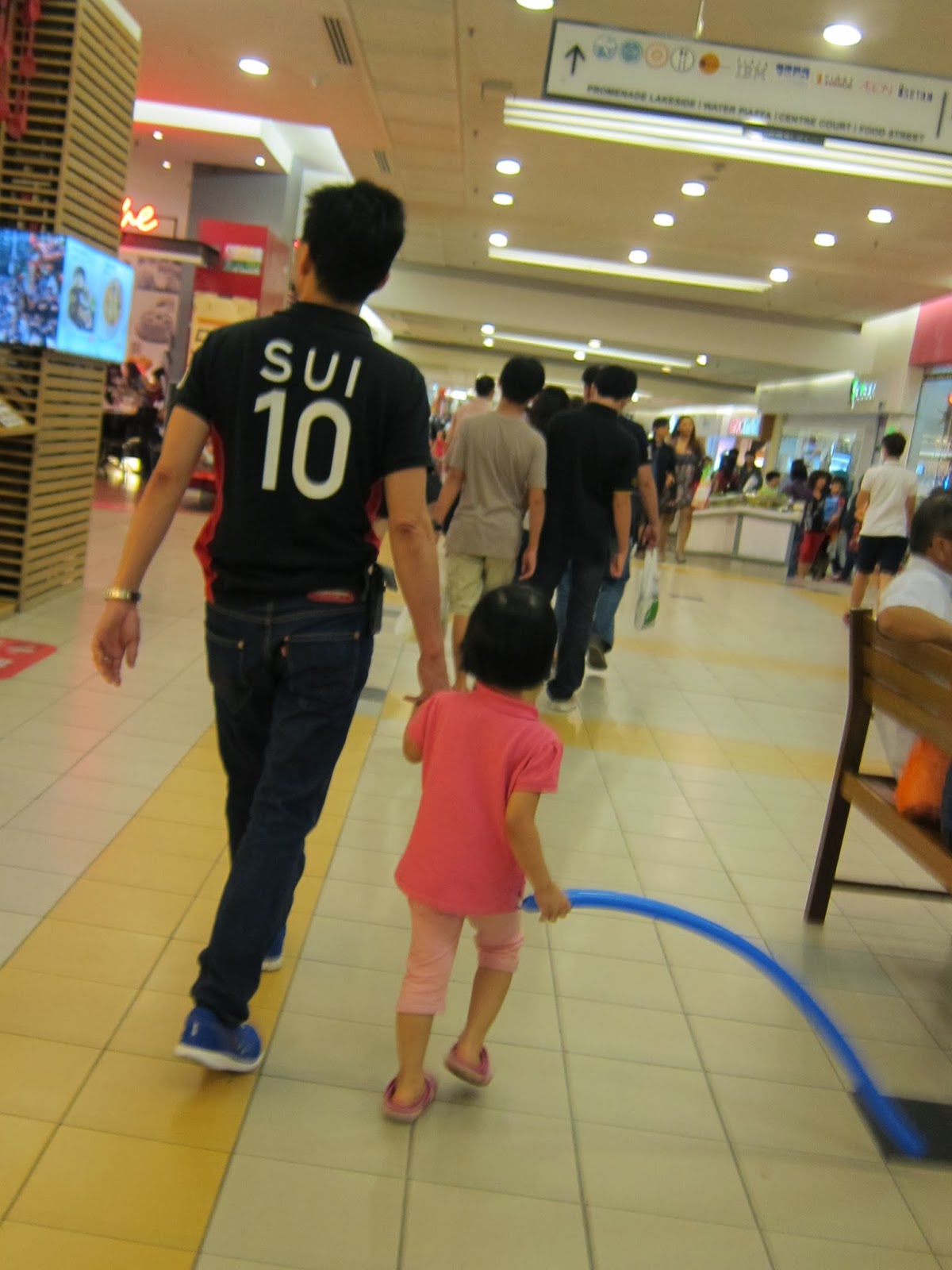 Just what I wanted
Posted by Stacy at 5:25 PM 3 comments:

SE has been saying 'Papa', 'Mummy' and 'jie-jie' clearly for quite some time. But she didn't know how to refer to herself. Then last week when I asked, who turned on the small light?  She said 'Su... Su..' and then pointed to her tummy. First time for my baby girl, yay!

Since then she's been happily referring to herself as Su-Su. Hmm not quite what we want her to call herself as 'Susu' literally means 'milk' in the Malay language. But hubby calls JE 'Jo-Jo' and calls SE 'Su-Su Ern-Ern' so I guess she naturally picked that up. 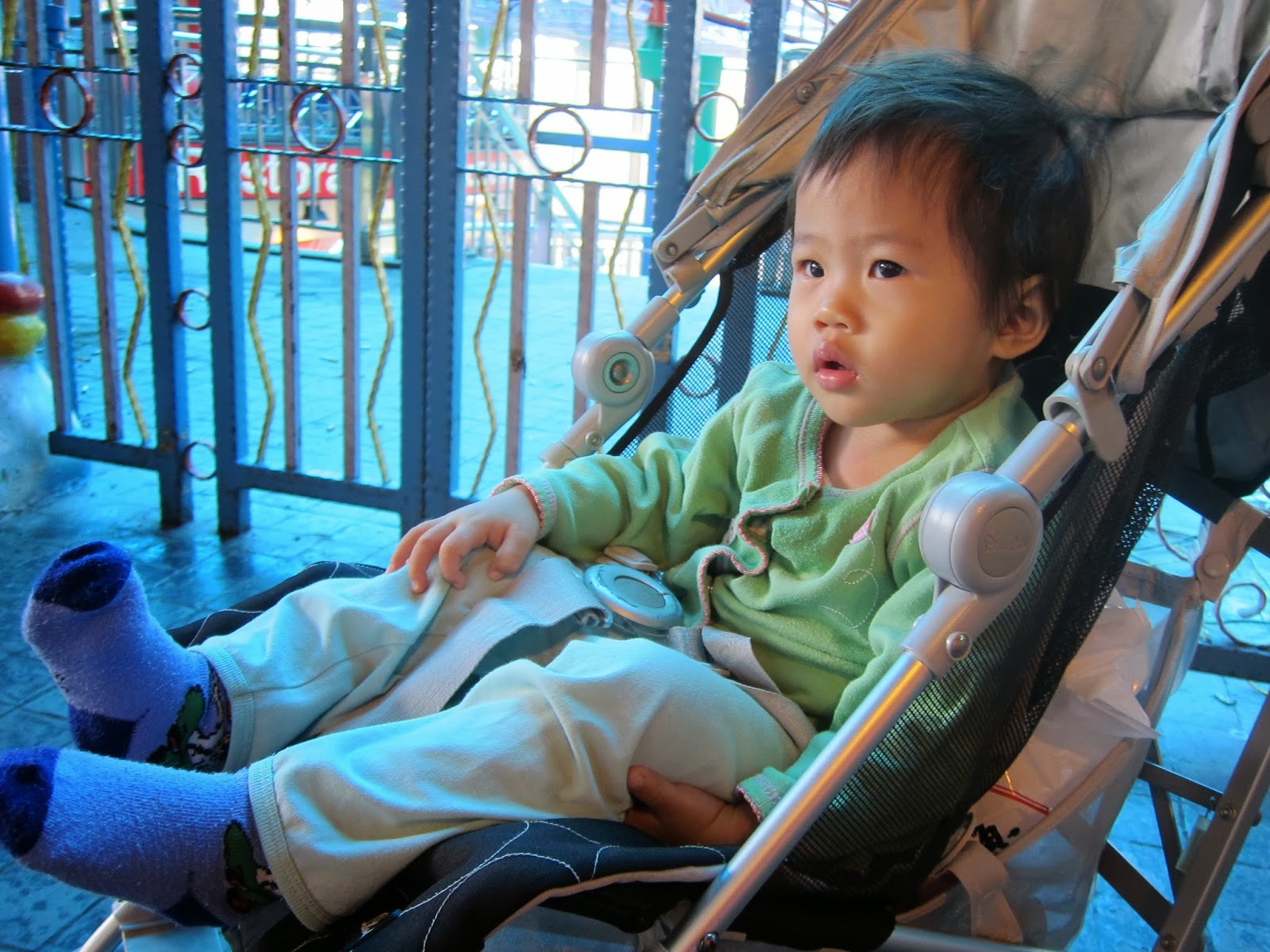 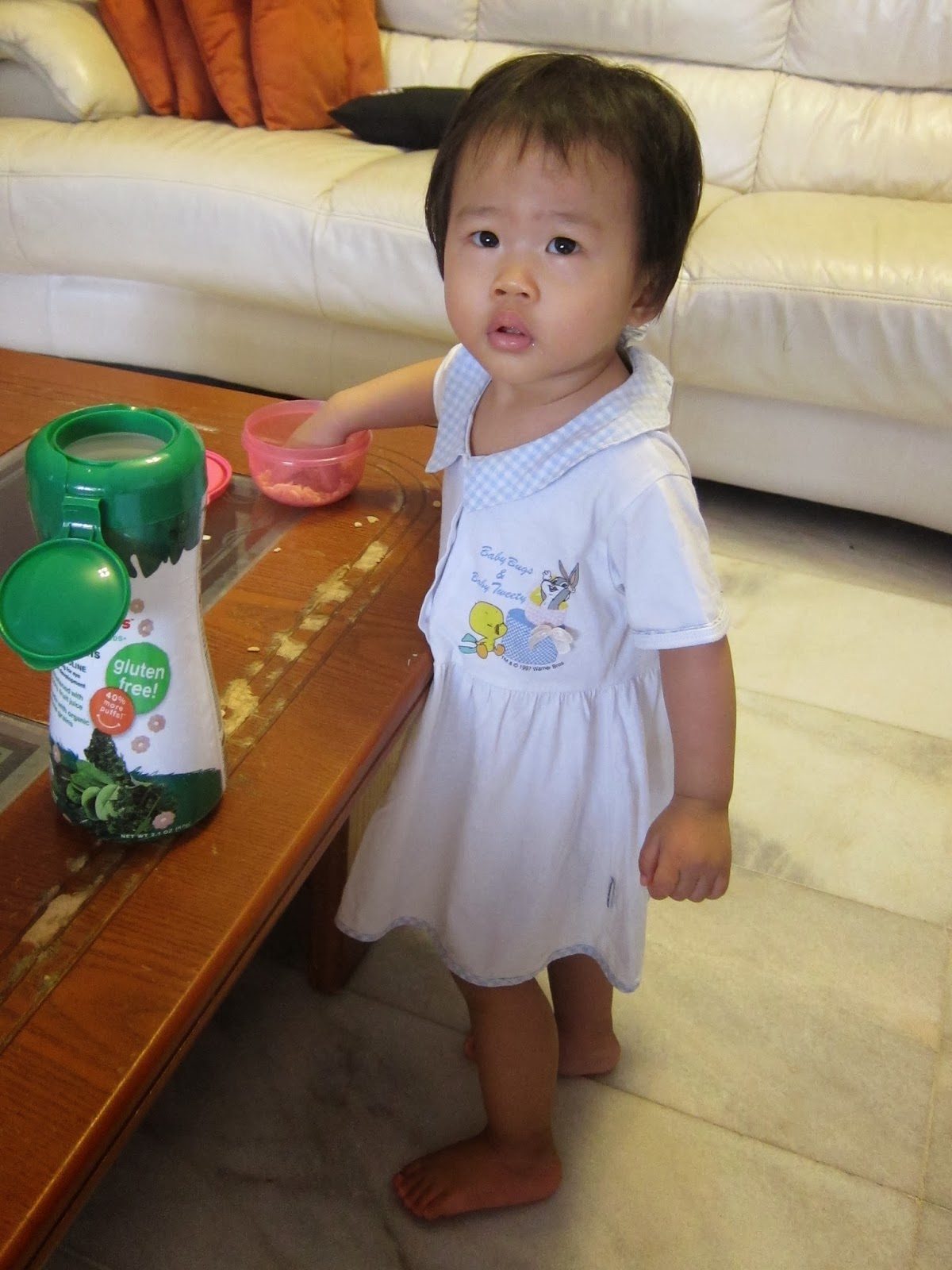 When she wakes up in the morning and everyone else is still sleeping, she often lies there and recites softly to herself:  Pa-Pa.... fooooo.  Ma-meee.... foooo.  Jie-jie..... fooooo.  Now there's a new category!  Su-su...... fooooo.  Heheh.  (The 'foooo' part changes. It can be another sound like 'jeek', sometimes it's a cluck of her tongue. Yesterday it was 'yeh yeh yeh')

We hadn't been going to Genting for a while now.  Well actually I didn't blog about the last couple of trips but... by our standards, it HAS been a while!

So off we went last weekend as hubby wanted to try his luck at a draw for luxury cars. In my defence for what happens next, hubby confirmed this trip rather late plus I was coming down with fever/flu. First thing I realised when we reached the building, I'd forgotten to pack pants for SE. Plenty of long-sleeved shirts but, nope, no pants at all.

Oh dear oh dear. SE had on these 'auntie' pants (put on by the maid) that were too short for the weather. Not to mention being thoroughly unfashionable! 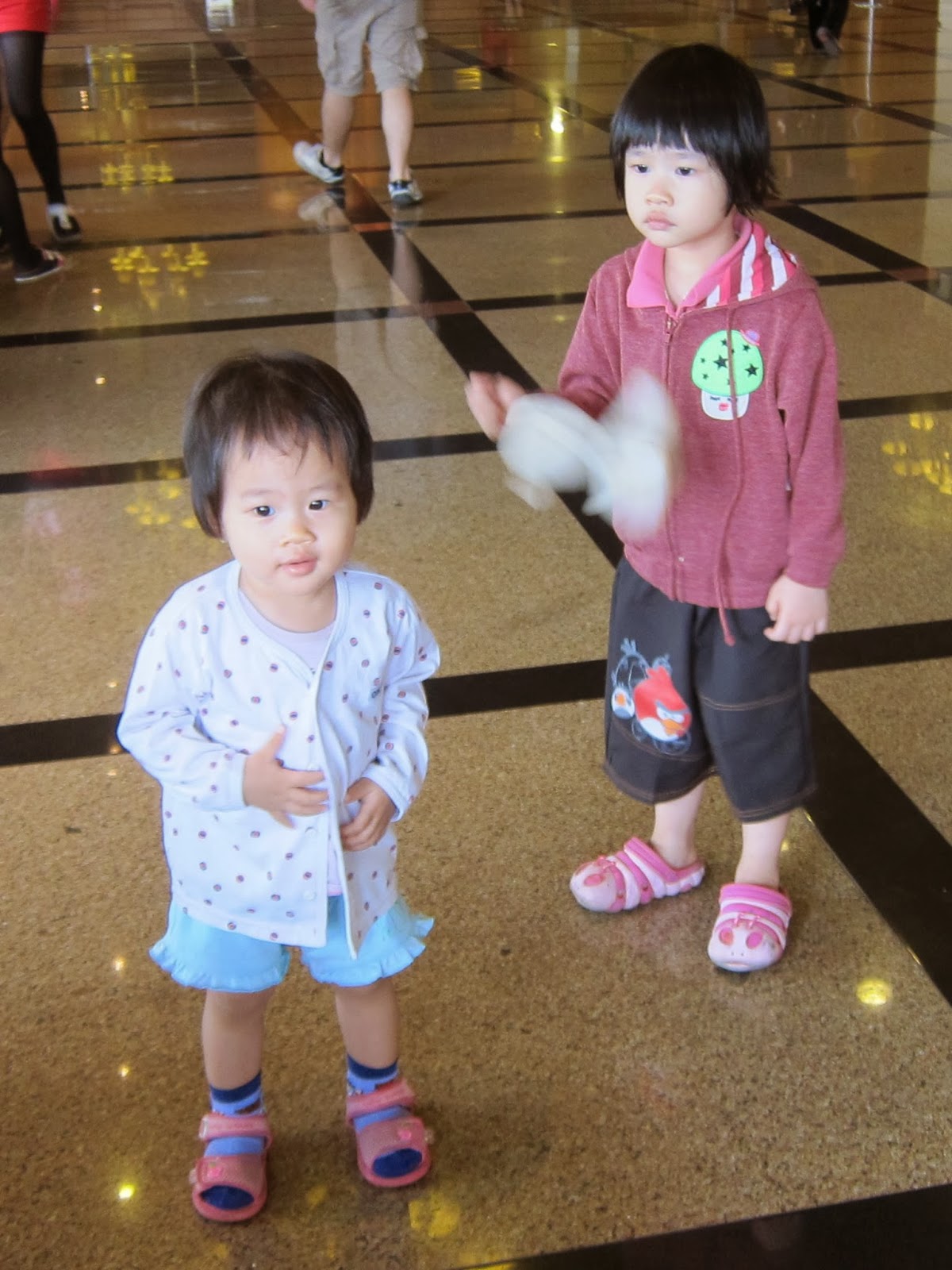 (Dotted shirt is on SE)

O-kay, never mind, I could use JE's pants on her - after all, it's just to keep her warm. A few minutes of scrabbling in the bag revealed... no shirts for JE, nor pants either!

Breathe in breathe out... luckily, I had thrown a pair of denims for JE into the food bag at the last minute. And SE's dotted long-sleeved shirt was rather big and could fit JE.  And yesss, there was a pair of pants for SE in my backpack which is part of my emergency stash. Phew. When you have little, every little bit counts! 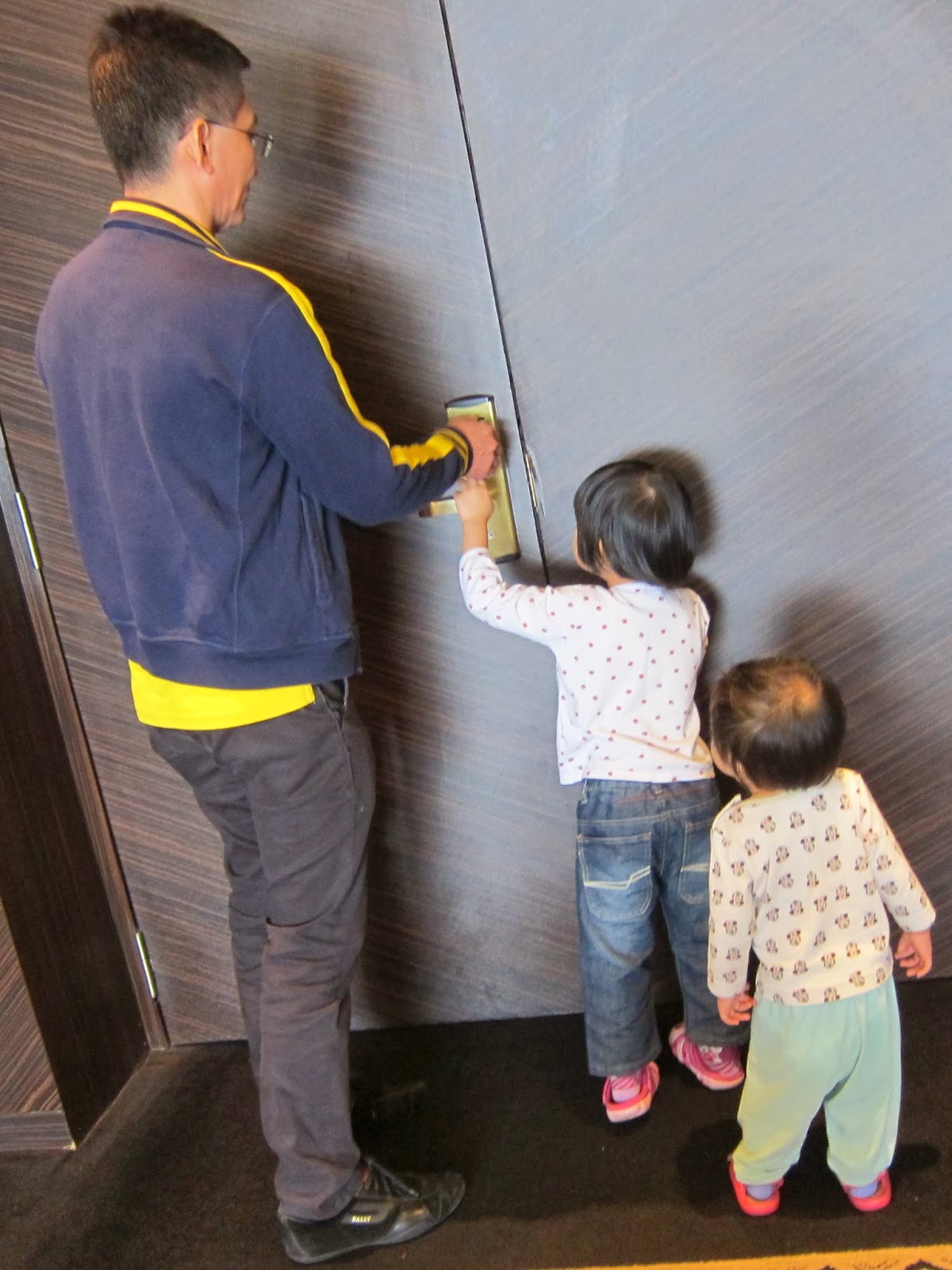 Papa showing JE how to work the card. SE being a busybody
(Dotted shirt now on JE) 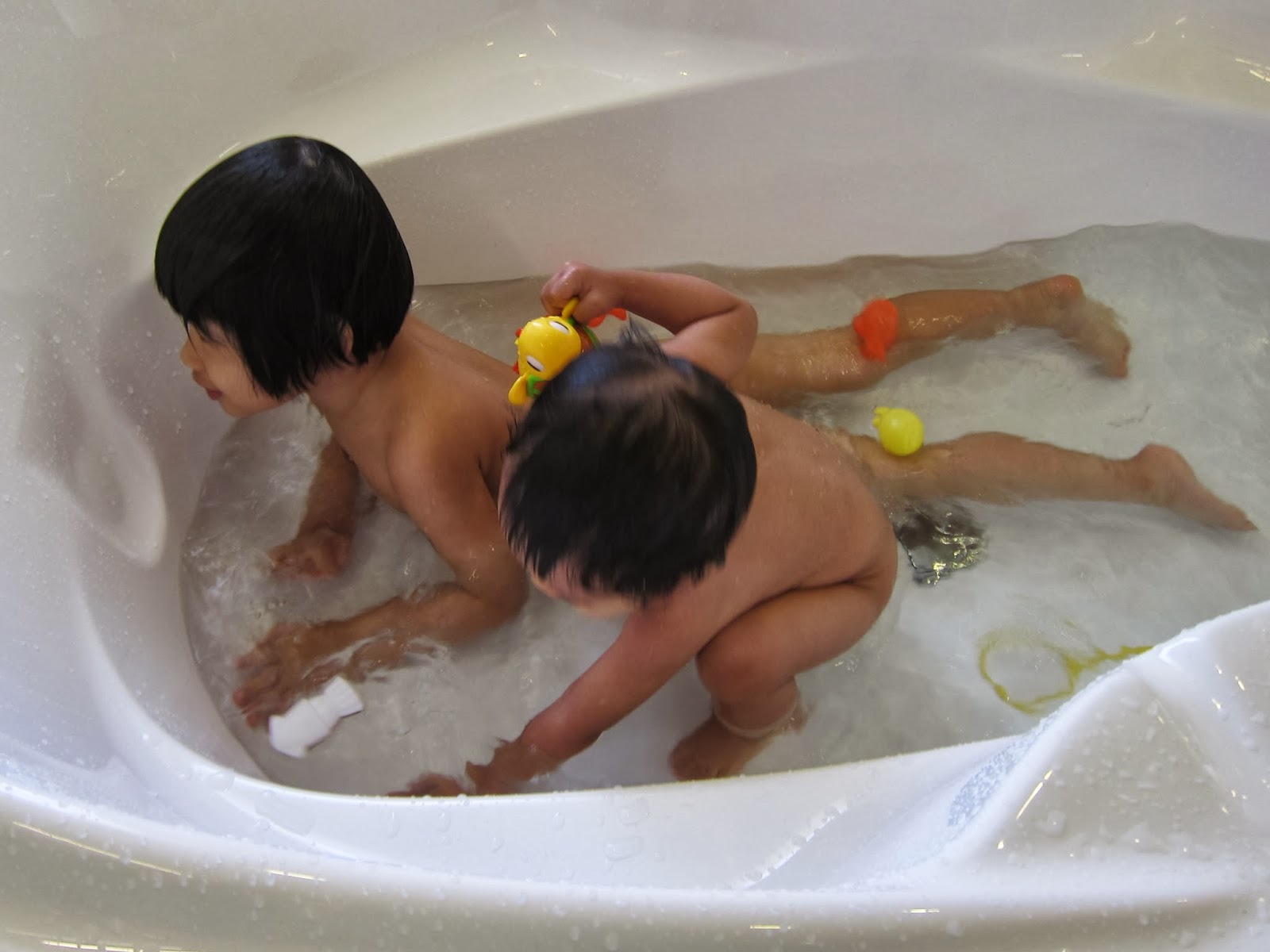 We say, you don't need clothes to have fun!

Kids being kids, they dirty clothes pretty fast. JE's angry bird pants got wet that night and I washed them. She slept in her denims. Next day, SE got her pants wet as well. OK, angry bird pants were already dry. Ta-dahh... 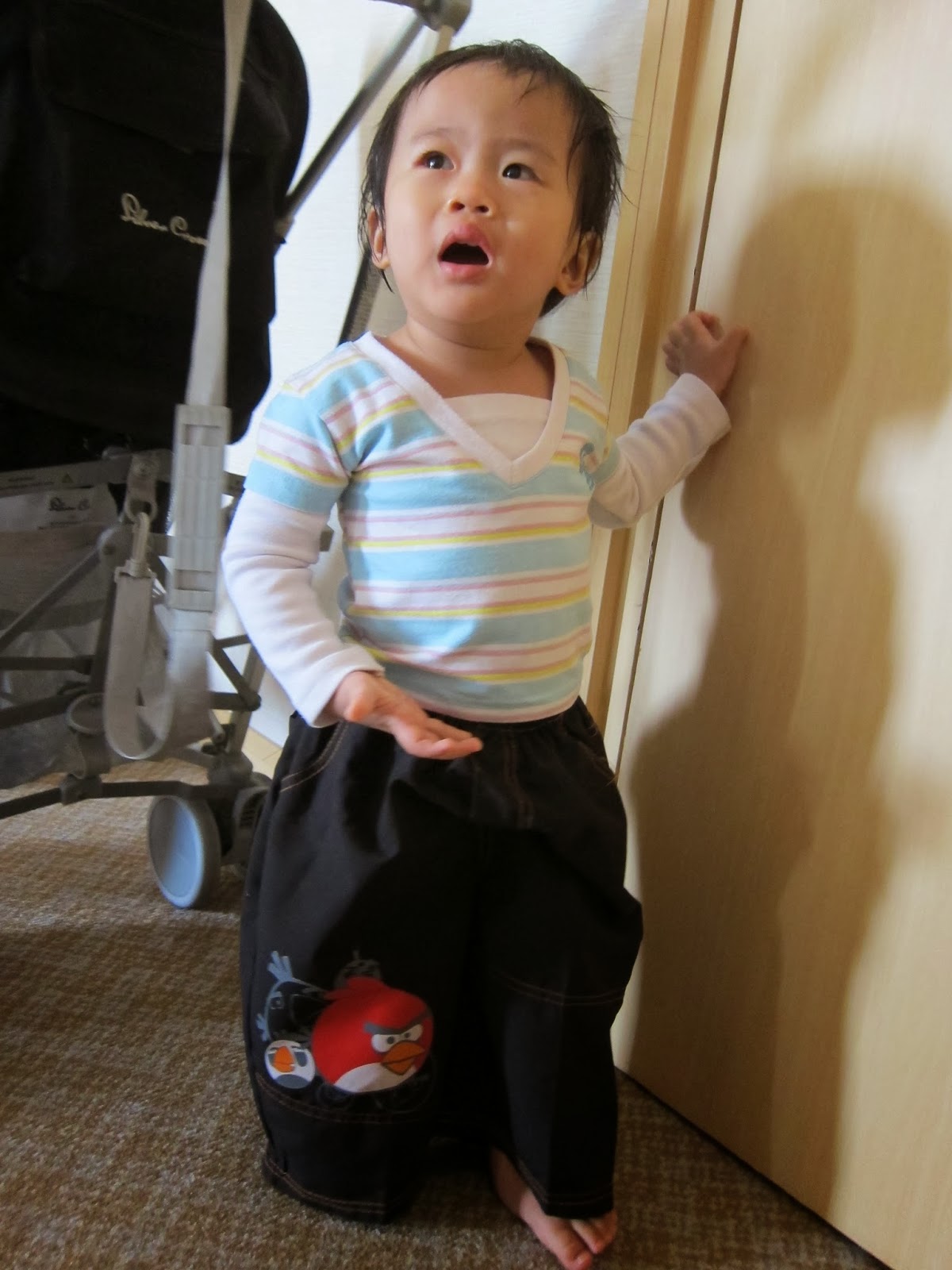 You don't expect me to go out in these??

Scrapped the idea after the pants fell off her hehe. Turned off the aircon in the room and let her roam about in her diaper while I used the hairdryer on her pants.

What else happened... oh I found no underwear for myself either. Hubby offered me his briefs. I was desperate enough to try... and oh, they fit! Very comfy too! Heh heh.

We got through the weekend and got home. And what did I see lying in the middle of our room floor? A pile of JE's shirts, pants and my underwear. Hubby professed to know nothing about how they got there. Next time, I shall double-check that nothing 'falls' out of the bag!

I have been rather lax in taking pictures of my girls. The good thing about having a blog is, I need photos to keep it going so once they start running out, I know it's time to take out the camera!

Some pics from one evening. One of their favorite things to do is this:  JE climbs up this pot, pulls some elongated leaves from this plant and passes one or two to SE. 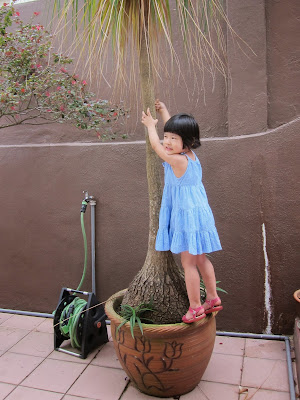 Gotta pull this from here. Erghhhh 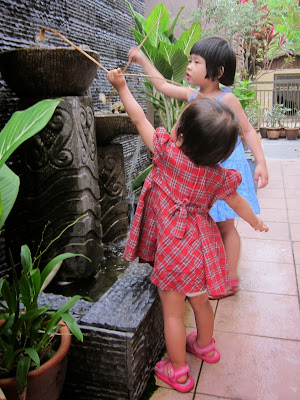 Need the leaf to cook-cook-cook

The girls love messing about with the fountain. They pick flowers from the garden and float them in the water, take stones from the pots and throw them in the fountain, hold these leaves and pretend to be cooking something. Or just hold their hands in the flow of water and get themselves all wet. Certainly didn't plan for this to be a kiddy plaything when building it last time! So now it's more value for money hehe.  I do keep an eye on them, especially on little SE, just in case of mishaps. Can't be too careful with kids around water! 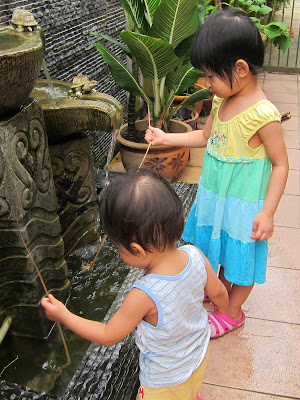 We are cooking something nice for Mummy!