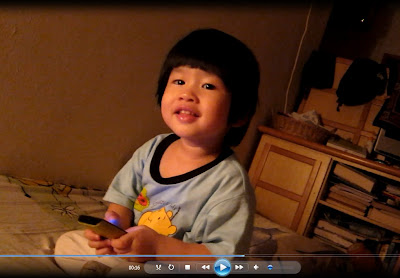 Play with Mummy's phone then only oi-oi
I'm glad Jo Ern actually LIKES bedtime. She has her routine starting 10pm - drink 3oz milk, happily show off empty bottle to me and hubby, walk to kitchen sink to plonk empty bottle in, brush teeth and then announce "Oi-oi time!" before climbing the stairs.  Hubby would typically still be watching TV (the man stares at the screen for HOURS!).  Previously I'd take Jo Ern upstairs while he continues with the TV.  Now that Jo Ern talks, she'd go and tell him, "Papa!! Oi-oi time! Papa oi-oi time!!" until hubby actually moves his butt to bed.  Heh.

What she likes isn't actually the sleeping part.  I'd switch the bedside lamp on and the main room light off.  While the bed is bathed in the glow of the lamp, we read her books and do the 6-pc jigsaw puzzle that sit on the bedside table.  She hands her toy octopus over to hubby and her toy dog to me.  If hubby tries to nap the dog instead, she would cry.  She takes back both animals when she wants to sleep.  Sometimes she grabs my phone to play with and then it might be a short battle getting it away from her.  My policy is to hold off giving her gadgets as long as possible, seeing the affinity she has to phones/ipad/computer!

Eventually we turn the light off.  Sometimes it's another battle as she wants to play some more.  But this won't be long and soon she goes quiet.  She sleeps through the night, this one.  :)
Posted by Stacy at 7:28 PM 2 comments: 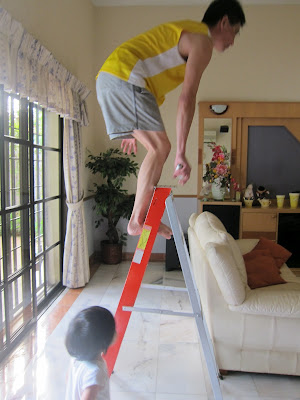 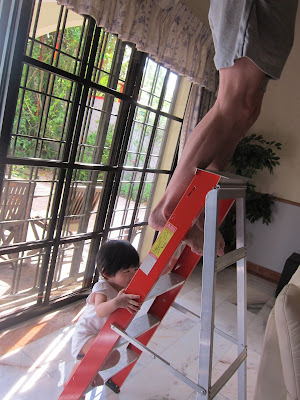 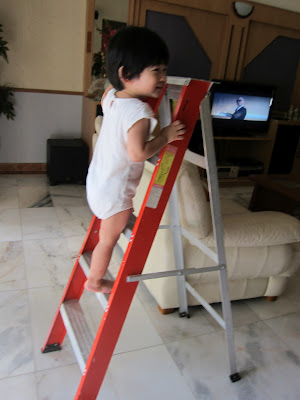 Yayy I am climbing up and UP!
Jo Ern loves to climb! She has always been pretty agile and would try to climb things much taller than she is.  She'll have a huge grin once she succeeds.  She climbs up the piano stool at my parents', hubby's Lazyboy chair, my kitchen drawers using the handles as a ladder, our door grills etc.  My dad warns that she's heading for a big fall one of these days...

When hubby took out this ladder to change some light bulbs, it was fun-time for Jo Ern!  She doesn't always know how to climb down again though. :)
Posted by Stacy at 8:36 PM 5 comments: 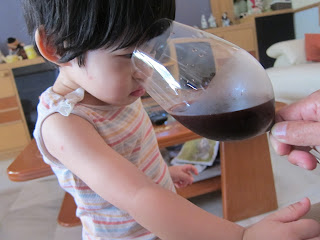 Yes... this is a very good vintage
Pic shows Jo Ern inhaling alcohol from hubby's glass.  Future wine connoisseur or alcohol junkie?  Hmm... I personally wouldn't encourage this at all.  Told hubby that addicts get high from sniffing glue just like this. But hubby decided that's a completely different thing.  And will offer Jo Ern his glass to smell.  She on her part already knows that she won't get to actually drink, and will still happily stick her little nose in the glass and breathe in deeply.  Sigh. I shall compromise and take a step backwards.  Maybe it's good to have a counter-point to my overprotectiveness.

Since I'm on the topic... couple of other points on which hubby and I think differently:

1. I am following my mum's rule of no snacks right before meals. Hubby on the other hand believes in having many small meals and thus snacks whenever he likes. Only last weekend, with lunch to be served at 12.30pm, he made himself instant noodles with an egg around noon. On the bright side, this is someone who will never complain that meals are late!  I have basically come to terms with this. Well sort of, I do get annoyed when he doesn't do justice to a meal I've painstakingly cooked because he just had a big snack of roast pork washed down with Guinness Stout.

Jo Ern is showing the same preference for snacks vs meals.  Hubby says might as well let her eat what she wants rather than force her to eat what she doesn't.  He will give her the biscuits, bread and whatnot she asks for while I am cooking dinner. I do intend to fight this battle, to get proper meals into the kid!  (Hubby says biscuits and bread are also nutritious what... grrr)

2.  Hubby recently decided that a 2am curfew was right for an 18-year old girl.  I would freak out if 16 years in the future, my precious Jo Ern wasn't home by, oh, 11pm!  Heh. But I am aware also that setting unreasonable rules will mainly result in broken rules. Oh well, I still have time to enjoy her childhood innocence and will cross this bridge when it comes.
Posted by Stacy at 7:41 PM 9 comments:

I have yet to collect the actual photos from our photoshoot.  At first it was a misunderstanding - I was waiting for the draft photos which the studio thought they'd already sent and was waiting for my approval.  After we got over that, the place was closed for CNY.  Right, NEXT week I'm going over to that area again and shall collect.  In the meantime, here are 3 of the 5 photos we picked. 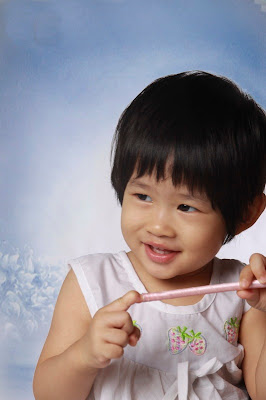 The only one with a smiling Jo Ern 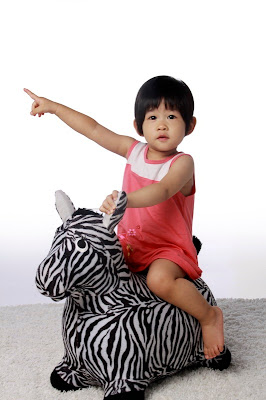 Strong pose this one 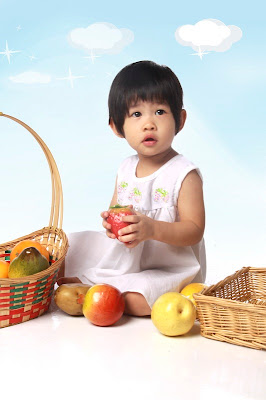 Portrait with fruit
For the last photo, there was a better photo in the series where she was 'eating' a fruit. Too bad that was a POTATO. *Smacks head*... why studio put potatoes in the basket la??! Put all fruit cannot meh??  I'd have picked that other photo if the fruit had been a strawberry or apple!
These photos were taken 2 months ago and she already looks different!  Overall, while the photos are not terribly nice, I guess they're decent enough.
Posted by Stacy at 7:40 PM 5 comments:

She knows what she wants... the terrible two's are coming!  I guess it has to be this way.  Before this she was barely aware of anything outside herself.  It is now that she has made enough sense of the world to know what she likes and that she has some influence. 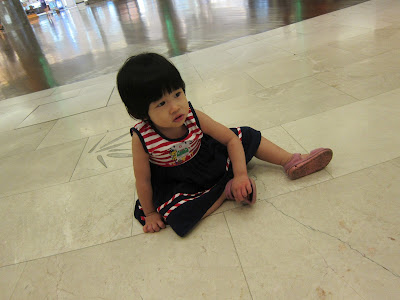 I want to ride the escalator again! And I WILL sit right here until that happens!
I'm glad she's small enough to just pick up, even while kicking and screaming!  And she's still easily distracted.  Like with a box of raisins.  Preferably don't plan on removing the box before it's empty. 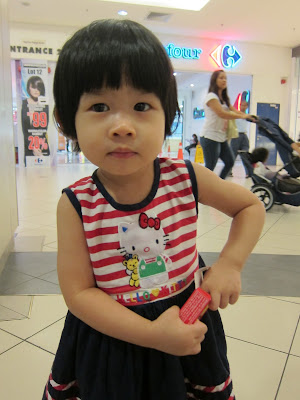 Hm? It's my box. What is it you want with my box?
Luckily for me, she is overall a sweet child.  When she's in a normal mood, she keeps her toys, takes out diaper and mat in preparation for being changed, regularly brings water-bottles to respective owners.  And she likes to share her food. :) 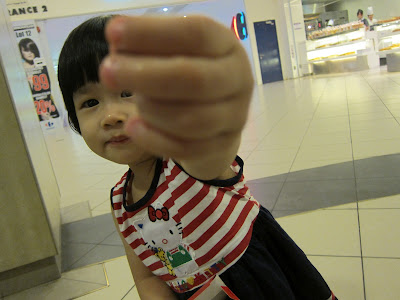 "Ern give Mummy" - she says this whenever she sees this photo!
Posted by Stacy at 7:05 PM 3 comments:

See this happy little girl?  She loves sitting in these things and turning the steering wheel or pressing buttons or whatever is available.  Whenever she spots one of these contraptions, she'll point excitedly and ask to 'chit car/cat/horse/duck etc'.   I am sooo NOT gonna put any money in them, for as long as possible!

I took these photos which she loves to look at... sometimes going 'Pwog! Pog!'.  Which I didn't decipher for some time. 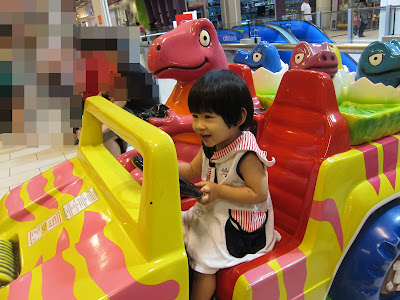 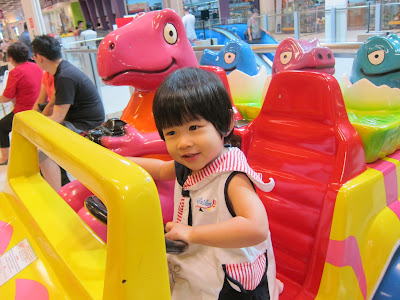 It's proving to be the usual hot CNY weather.  Jo Ern has been keeping cool in her turtle pond.  But there is now another part to the experience...

First part - chillaxing in the turtle 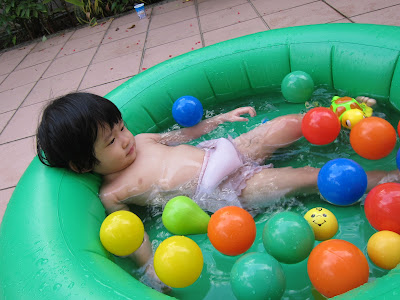 This is nice!
First part lasts a max of half an hour.﻿  On to the usual cleaning up (and the usual cries of "noo! NOO!!!!").  Then it's time for the second part.
Second part - playing with the leftover water! 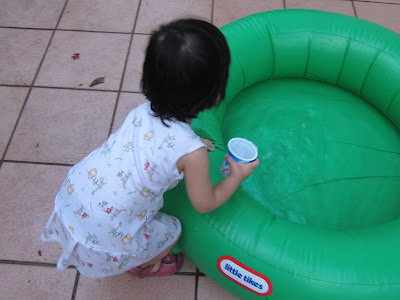 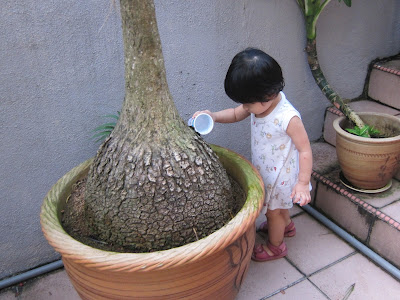 Pour!
Heh, the second part keeps her busy for ages!  She'd scoop water into the cup, run over to the chosen plant and pour the water on it.  Sometimes a small potted plant gets lucky many times while a big plant gets only one cupworth.  All up to the whims of a 1y 10m-old 'water-goddess'!  I'm quite pleased with the discovery of this extended water-play.  She is soo happy running back and forth with her little cup.  She does get a bit wet but not enough for me to worry about her catching a chill.  And I'm off the hook, for a while, of thinking how to keep her entertained!
Posted by Stacy at 12:53 AM 4 comments: